Haiti: Are the Rescuers Afraid of the Victims? 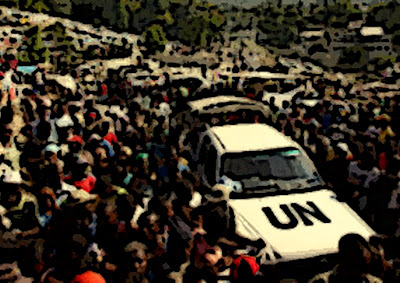 In Haiti, another aftershock, even as the slow motion nightmare continues. Food and water and medical supplies at the airport. But not where they are desperately needed.

Is it just a logistical problem or is it something worse?

Are the rescuers afraid of the people they are supposed to save?

There has now solidified a consensus among aid organisations that the relief they are bringing is itself a liability; that distributing what Haitians are dying for – literally – will bring on a second nightmare. So, supplies pile up at the airport because, apparently, the Haitians need to be fed and watered at gunpoint. And there aren't enough men with guns to provide this totemic "security" and there aren't enough trucks to move the supplies around the country.

And is the media part of the problem?

Frei's reluctance to recognise the amazing self-control of these desperate people, and instead to amplify the hysteria about violence for which he has scant evidence, has brought him at times worryingly close to calling the Haitians savages.

When considering how much they are suffering the Haitians have been amazingly restrained. Staring at food on the other side of a fence that they can't have.

Is it because they're poor?

Furthermore, to the horror of many godfearing Americans, voodoo is an officially recognised religion in Haiti. And, perhaps above all, Haitians are poor and black. In the view of some Americans those two add up to ... murderous gangs.

Or is it just racism rearing its ugly head again?

Because if that is the case, it will taint this rescue effort forever.

And all I can say is thank goodness for these heroes.

And the strength of the Haitian people.

Because the ugly truth is that when they needed us the most.

As a person who has and continues to serve his country. I can honestly say the average person is ignorant to what goes on in places in severe civil distress/unrest.

I have help deliver aid before and the workers needed protection from people like myself. They would not leave the compound with military escort.

It has nothing to do with race, creed or religion. Religion though can play a factor, but in my experience the religion of choice matters little compared to have fundamentalist it is.

These countries lack the infrastructure and stability at the best of times never mind the worst of times.

There is no animal on this planet more dangerous then humans and no weapon more deadly then the human brain.

Then again we live in a time of war, but I don't see any victory gardens or no meat Tuesdays or any real sacrifice from the population at large.

Hi Paul...I agree with you that the average person is ignorant of what goes on in places torn apart by war and disaster.
And I realize there are places where a military escort is needed.
I just find the reaction of some humanitarians in this case to be a little exaggerated.
Did you know that Haiti has one of the lowest homicide rates in the Western hemisphere...lower than the Dominican Republic and even Cuba?
I'm not asking doctors to be heroes, but when the need is so great they could be a little braver...