You know how I was feeling pretty optimistic about 2010 the other day eh? Well I changed my mind.

First Sébastien came down with some sort of stomach flu. Then I started to feel queasy. Then my doggy ate a cheesy hoover doover, and left a soggy dump...the size of Mount Everest... all over the carpet.

But even that wasn't as bad as reading Rex Smurphy's latest dump.

The ferocity they applied to the Republican vice-presidential candidate, Sarah Palin, in contrast with the timidity they brought to his campaign, will in time come to be seen as one of the most shameful episodes in American journalism. Not so much for what they did to Ms. Palin, but for what they neglected to do in examining the candidate for the office that really counted.

Because if they had ...and they did... the American people would have concluded that the senile Johnny McCain would have made a better Commander in Chief, and the redneck from Wasilla has what it takes to be one heart beat away from the Presidency?

Huh? Or should that be Hee Haw? Because Obama may be imperfect, but he's still better than that.

I mean really. I know this horrible little Con is a monumental bore, a climate change denier who turns PMO talking points into fart balloons ....when he's not going on and on about Pamela Anderson's boobs. But does he have to be such an IDIOT?

And why are there so many right-wing assholes in Canada who are paid big bucks to make us all look like rednecks...or tweedle dummies? 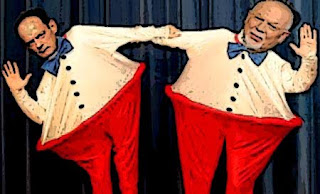 Is THIS who we really are? Talk about Time passing people by. Isn't it about time this Con freak show was RETIRED?

Oh boy. It's almost enough to make me head for the airport, and buy a ticket to ANYWHERE.

Except with the temperature hovering around -25 degrees outside, it's not ideal travelling weather. 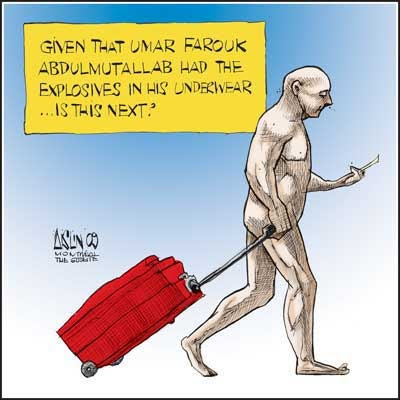 Especially since the situation is even more desperate than that eh?

Aislin forgot to tell us to wear a pair of diapers in case we need to go to the washroom during the flight...and don't want to risk getting SHOT.

Or warn us that the worst is still to come.

Now we found someone who was made to believe he could kill people with an asshole bomb, and so it follows that the TSA will have to ban -- or at least inspect -- our assholes. They're like opinions, you know, everybody's got one. Except, of course, most of us got to keep our assholes to ourselves. Not anymore.

Gawd. Stephen Harper, Sarah Palin, Rex Smurphy, Don Cherry, AND the asshole bombers. Why when I think of one of them do I think of all the others?

Oh well. Nothing is going to bring me down. I'm just going to have to put on my lucky tuque and hope that 2010 will see the end of all of them.

Because that's how I feel about all those...um... assholes... who cloud my life. And so does my NEW doggy.

At least this is what he thinks of Smurphy...

OK. I know. But the idea is to try to keep smiling...even in Con Canada. Even when you're sick.

Even when they ask you to bend over.

Remember it can only get BETTER.