Are the Cons an Apocalyptic Cult? 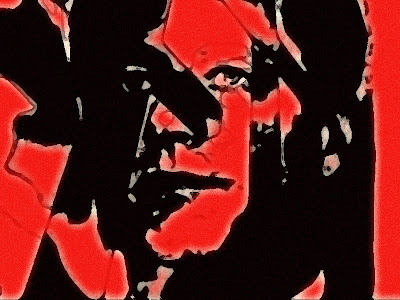 Is Canadian foreign policy being guided by Old Testament prophesy? Are the Cons waging a secret war? You be the judge.

First let's start with some excellent work by Paul Wells, who has been looking into the Rights and Democracy tragedy, and has come up with some really interesting material. You should read all of his posts.

But let's start with this one.

By January, the Harper government had ﬁlled the two board vacancies. One new appointee was David Matas, the legal counsel for B’nai Brith Canada. The other was Michael Van Pelt, who heads a Christian think tank called Cardus. At the Cardus founding conference last autumn, Van Pelt said, “Canada’s new debate and that of the world will be one of faith and belief. It will be one of a religious character.”

Then let's read this one.

Where we learn that the sweaty SoCon Jason Kenney either misspoke himself or LIED about his attack on the decent humanitarian organization KAIROS. Or did others IMAGINE what he said?

Steinberg also helpfully links the Rights and Democracy controversy to the government’s recent decision to cut funding to the ecumenical group Kairos. Which is odd, because Jason Kenney has angrily denied he meant what he said when he said Kairos’ funding was cut because of its stance on Israel

Then let's go to the funeral of poor old Rémy Beauregard, and find out what the new chairman of Rights and Democracy believes about Jerusalem.

(UPDATE: Turns out he published a doctoral thesis two years ago arguing that “Jerusalem belongs to the Jews by international law.”)

Then let's take a side trip and follow the hideous SoCon sheriff Vic Toews all the way to the Middle East.

Toews, who met on Monday with senior Palestinian Authority (PA) officials in the occupied West Bank, is quoted by the Post saying, "Canada is not reducing the amount of money given to the PA, but it is now being redirected in accordance with Canadian values."

And then let's ask ourselves the obvious question: Why are Stephen Harper's Cons so OBSESSED with the Middle East?

Answer: because a lot of them, and their rabid religious base, believe that Israel's main purpose in life is to provide a landing pad for the Christian Messiah. Which requires a Greater Israel, an all-Jewish Jerusalem, and no Palestinian state.

And also requires the poor Israelis...who will be left behind like the rest of us heathens... to provide a battlefield on their territory for the apocalyptic conflict that will precede his arrival. The Battle of Gog and Magog. 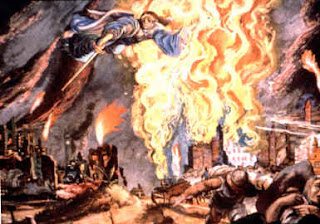 You know the one George Bush was babbling about.

The zombie battle the PMO's unofficial chaplin, the porker homophobe Charles McVety, preaches about all the time.

In a PMO, where the Deputy Chief of Staff Darrel Reid served for five years as the President of the Christianist group Focus on the Family. And believes this:

"I think every Christian is under an obligation to change laws to reflect biblical values," Reid said on the website CanadianChristianity.com.

Another Christianist Paul Wilson is the PMO Director of Policy.

And Stephen Harper himself belongs to an apocalyptic church that believes that the world could end tomorrow. And that's a GOOD thing.

Oh boy. Paul Wells sums it up like this.

The goal of the government’s action on Kairos and Rights and Democracy has been to make moves that would be noticed by almost nobody, but would have narrow-cast appeal to a very small, very engaged component of the Conservative voter base. Simply by getting noticed outside the target voter market, that strategy has lately gone a bit awry.

And he's right. Although I would take it further. By connecting the dots, and asking this question again: are these Harperite SoCons overhauling Canada's foreign policy to conform with the hallucinogenic doomsday visions of Old Testament prophets?

And is it just to appease their rabid base, or is it also because the base is THEM?

Because if that's true, and Canadians find out what's really happening, the Cons will be finished FOREVER.

First they try to shutdown our democracy, now they're secretly trying to turn us into a THEOCRACY?

Oh.My.Goggy. What else can you say eh?

THANK YOU, Simon! Fantastic blog! Yes, the Harperites ARE following "biblical" direction, which entails that Israel be strong & supported, in order for their "Last Days" to occur there, so that the final prophecy of End Times & Jesus' return will be fulfilled. A close relative goes to the same church & this is their operating belief. Yet nobody seems to pay much attention to this, to the right-wing christian gps & people that keep being appointed & collected around Harper & the gov. You've done a terrific job working both the religious & the Rights & Democracy issues together!

Perhaps it's time to do a documentary for Canada like this one here that pertains to the US.

Excellent, excellent, post, Simon. This one is definitely going up on CAPP. I've been putting your posts there for a little while now. Hope you don't mind. ;-)

I sure wish MacLean's or the Globe had the courage to do a full length feature article on the Rapture and Harper's foreign policy (nearly a mirror image of Bush doing EXACTLY the same thing). Canada's shift in foreign policy on Israel/Palestine issue, from neutral to very pro-Israel is so clear to some, but not enough of the general public understand it.

hi CanNurse...thank you I'm glad you liked it. The one thing about the Harper Cons is that they are so centralized nothing happens unless it's approved by the PMO. So it's easier to detect a pattern of abuse. And since this pattern of abuse is so obvious, the question is WHY? I have also noticed that Harper is drawing on the SoCon heavies more than ever, with Day and Toews now joining Kenney, Flaherty and all the others. And I was very disappointed that our MSM hasn't been able, or willing, to connect the dots. The HarperCons are counting on that, and on the ignorance of the public, but they can't fool some of us... :)

hi Gene...thanks for that video. It really is scary. I think a lot of Canadians don't realize what kind of effect all the apocalyptic events since 911 have had on these religious fanatics. Those events have affected us all to some degree, but it has sent the fanatics into a frenzy, and if it can happen in the U.S. with this ConAmerican government it can happen here. The good news is that Marci McDonald...who wrote the classic article Stephen Harper and the Theocons... is about to come out with a new book which I hope will awaken our MSM and force them to ask the questions that really need to be asked...

hi Omar...thanks and feel free to spread it around. I'm going to have to designate you as my literary agent. :)
Seriously though... I'm sure others can do better, but I'm hoping it will make people think about what's going on, and do their own research...

hi anonymous...like you I wish that the MSM would take a closer look at how extremist religious beliefs are shaping policy. To be fair there have been more stories recently about individual cases, but what we need is a more exhaustive investigation, and the courage to paint a bigger picture.
But then I was shocked by the fact that a French President revealed Bush's religious fanaticism on the question of going to war with Iraq...a decision that has caused incredible horror and misery...and
to my knowledge nobody has ever followed this up in a major way. Or questioned Dubya about his outrageous claims.
Throw into this ugly mix the fact that there are signs that Tony Blair also invoked religion in his decision to go to war, and it really annoys me when I hear some Canadians insist that it could never happen here.
When with a PMO with more theocons per square foot than Bush's White House it's not just plausible it's
obvious. Ten years from now I honestly believe that historians will look back and wonder why so many were so BLIND...

The people who wrote these visions down prolly were not on psychedelics...

They did however interact with those people, then slaughtered them all and destroyed their cultures...