Hadrian and Antinous and Our Lost Gay History 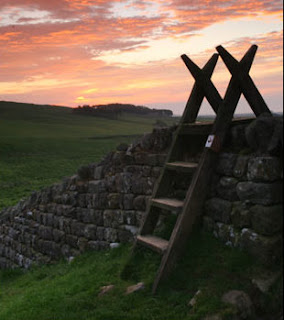 When I first came across Hadrian's wall as a child...and I was told that the Emperor had built it to keep the Scots out of England... I immediately hated him.

And wondered who would WANT to go to England anyway?

But then I found out that Hadrian was gay...and I changed my mind. And now I wish I was in London. 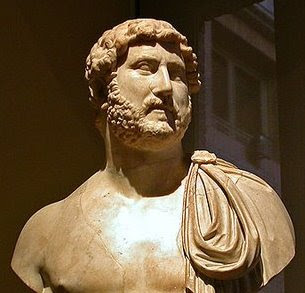 The bust is classically Roman, the face imperious. But this is no ordinary emperor. As a major new exhibition at the British Museum makes clear, Publius Aelius Traianus Hadrianus was not only a peacemaker who pulled his soldiers out of modern-day Iraq. He was also the first leader of Rome to make it clear that he was gay.

Several of the artefacts relate to his male consort, Antinous, who accompanied him on his travels around the empire. These items include a poem written on papyrus, featuring the two men hunting together, and new finds that include memorials to the dead lover at Hadrian's villa in Tivoli.

Because our history is a hidden one. Or a buried one.

And the tragic tale of Hadrian and Antinous is such a great love story. 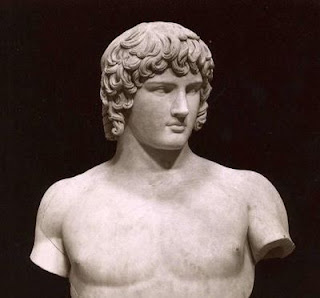 Hadrian commissioned so many busts and statues of Antinous there are more of the former slave boy today than there are of many Emperors. He made him a god after his death just like Alexander the Great made his dead lover Hephaestion.

Which only makes me wonder how many other great gay love stories were lost because for thousands of years nobody wrote about our history? Or our loves.

So it took FOREVER for people to realize that we've always been around. And always will be. That we are EVERYWHERE. And that OUR love is as good and as beautiful and as powerful as any other.

The good news? That's over now.

Because now we're reclaiming our history. We're writing our own.

And the small but excellent love story of Simon and Sébastien will live forever.

I wonder if the Pope will beatify his his lover before he dies?
Saint Gorgeous George...

It is odd that, an understanding of a person, subject, or whatever can be completely different before and after one finds out that you share a trait or interest with the person/subject/etc. I guess we all have to be biased toward the gay subject/trait, because if we don't, who will?

I have no idea if that made any sense.

"When I first came across Hadrian's wall as a child...and I was told that the Emperor had built it to keep the Scots out of England... I immediately hated him."

Why? He built the wall to control the border of the empire, and keep the unromanised Norther Britons out, not to keep Scots out: mainly because Scots were living in IRELAND at the time, and the English were in Saxony. There were no Scots or English in Britain. Everyone was Brythonic (British).

The Scots invaded after the Romans had gone. Concepts of Identity change over time. That applies to sexuality too. Projecting our models onto the past is often misleading, neither Hadrian or his fellow emperors would have thought of the concepts of gay or straight, and Suetonius is clear that most emperors liked a bit of both. Perhaps we should be as wary of sexuality tags as of ethnic ones. Maybe they just help us to pointlessly "immediately hate" someone for no reason.

I've read about Hadrian and Antinous. Can there be a sadder love story. Can there be a greater gay love in ancient times.......a time when the erastes relationship was a common place thing.beautiful, full of love for the boy..a nurturing love.
But nothing prepared me for Antinous and Hadrian. A real love like no other gay love I have read about.
Rock on Antinous....rock of ages..rock of sculpture

It does remind us that you can run a complex civilization without bothering about the tags "gay" and "straight." Mind your own business, no one gives a damn, have a long and honorable history. Maybe we should start calling that the true conservatism.