Why I Must Win the Canadian Blogging Awards

I'm not one for self promotion....but I think you should definitely vote for my blog. You ALL should. In fact I BEG you all to vote for my blog.....because I really LIKE it. And my mother AND my Facebook friends think it's really KOOOOOOOL!!!

Besides ....even though some say all the other blogs on the list are better than mine....and even though I nominated MYSELF... and have only been blogging for a few months.... I NEED to win.....because my humble blog is sooooo important to me....and winning would be AWESOME!!!!

Then you know it's time for The Canadian Blogging Awards.

And this year I'm happy to report that this humble blog was nominated (thanks Scott and JJ) in TWO categories.

And that the first one should be a cinch.

I mean I've NEVER seen a politician I liked. Or trusted. I hate them ALL!!!!

Of course ...I hate the Stephen Harper Party more than ANY other party in the entire world. And I consider Great Fat Leader to be the Creature from Alberta's Black Lagoon. A blight on the land. And a foul stench in the nostrils of decent Canadians.

But I don't think much of the dorky opposition either. Stephane Dion may be the best Frenglish-speaking comedic character since Hercule Poirot. But he's a millstone...an anvil....a humungous heavy metal BAGEL around the neck of the Liberal Party.

Then there's Jack Layton who reminds me of a helium balloon... without a string. Where ARE we going Jack? After the nasty neocons I hope.

Hell No!!!! We're going to teach those Liberals a lesson they'll NEVER forget....aargh!!!!

Or the Bloc...the separatists without a cause....who are so ABSURD they should all be wearing showercaps like Duckman their leader once did. I figure if they're going to be in Ottawa at least they should ENTERTAIN us. Eh?

You can't get more nonpartisan than that. So I figure THAT one is in the bag...

It's THIS one I'm worried about. Shite. I hate the smell of defeat in the morning.

But you know ....again ....just because there are better bloggers than me on that list...like Mark and Bruce. and Matt....it doesn't mean you shouldn't vote for moi. On the contrary I think you MUST.

Never mind those goody goody gay boys. Take a walk on the wild side.This country is already DYING of boredom. We need more of that Gay Boy from Green Gables stuff like we need an ENEMA!!!!

You know Sébastien is always saying this about my blogging: "Simon, mediocrity is its own reward." To try to cheer me up.

But for me it's just not SATISFYING enough. I wanna be a contender. I wanna be FAMOUS!!! I want every fat ass blogging ADDICT in this country to tune in to a LIVE feed of me just sitting there TYPING ...and laughing. And shake their heads and mumble...Awesome..... just fucking AWESOME. Over and over again. I wanna be a FRIGGIN BLOGGING GOD!!!!!!!!!

So that's why I need your votes. More than they do.

And that this old guy is hoping his little heart out that I win? 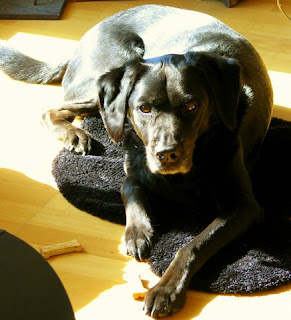 Because he's very worried that should the unthinkable happen and I LOSE..... I could get sooooo depressed I might forget to feed him.

For a week. Wouldn't THAT be awful?

And I can see how some people might think it would be YOUR fault for not voting for me. So don't. I mean DO.

P.S. Ok ok ....now that I've had my little bit of FUN....it's still allowed in Canada isn't it? I should be serious for a moment and tell you that I think my friend Mark deserves to win the GLBT award. Because he writes....and draws... exclusively about OUR issues. He puts our cause FIRST. And his really is a KOOOOOL blog!

The orange text at the beginnign was awesome! wooo for self promotion :P

I was just lurking around my human’s favourites (under blogs) and saw that you could be at risk of not being fed (on the off chance that he does not win the Canadian Blog Awards). That would never do, so I did not paws to click over the and vote for this blog.

If the prize is a dead fish to roll in, make sure Siimon shares it with you – you deserve it canine budd – after all it is us who look after them.

For example just last night my human and I were sitting in the den and my human said to me, 'I never want to live in a vegetative state, dependent on some machine and fluids from a bottle to keep me alive. That would be no quality of life at all, if that ever happens, just pull the plug.'

So I got up, unplugged the computer, and threw out my humans’ wine.

Hi Rashid!!! thanks...I couldn't resist having a little fun. And I did exaggerate a bit :P
I'm not big on these kind of contests....mostly because I never win anything. But I think it's an excellent idea because it introduces us to other people in our Canadian blogosphere.
I'm grateful to Scott Tribe...a very decent blogger... and to JJ my old hippie friend for nominating me in those two categories. They shouldn't have.
I was so embarrassed I blushed. However my face went even MORE red...boiling red... when I realized that YOU hadn't nominated me in ALL the other categories!!!!! :)

Good work pooch!!! But how could you throw out the wine????Something tells me you are going to be in the doghouse for a long long time ...
And Sassy...that was soooo cute :)
But don't worry the only time Kerouac was in danger of going hungry was one day when my car broke down outside a small town in Quebec ...and I had to check into a motel for the night until the car was fixed. And what with one thing and another I had just enough cash to buy dinner for ME....OR dinner for him.
So we compromised. I bought a bacon and tomato sandwich. His slice came with bacon. I had mine with the tomato!!!! You know when people wonder why he is so incredibly gentle and friendly I tell them he was the Walmart greeter in the small pet shop where I bought him. What I DON'T say is that he has been spoiled rotten all his life...and I'm afraid that's not going to change... :)

A man after my own heart.

p.s. pooch did not spend time the the dog house as I am the master of the corkscrew, and the wine rack.

I suppose I should check to see if I was even nominated for anything. If that’s what I was into I would be putting a hell of a lot more work into it.

When I read you as a man who really talks honestly and works hard and I enjoy you and you hold me up as inspiration for what you do, that’s reward enough.

But you haven’t met me yet, LOL

Hi Bruce!! You were the first one to be nominated. Or I would have nominated you myself. And don't worry about doing anything special...your blog is good enough as it is.
As for not having met you...uh oh...are you suggesting that you are not as nice as you appear (apart from being a grumpy queen now and then.) I don't BELIEVE it!!! :)