Will the U.S. Attack Iran on Good Friday? 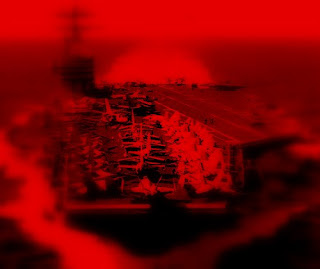 It looks as if the Easter weekend could be really cold in Canada, but very hot in the Persian Gulf.

The United States will be ready to launch a missile attack on Iran's nuclear facilities as soon as early this month, perhaps "from 4 a.m. until 4 p.m. on April 6," according to reports in the Russian media...

Yikes...not Good Friday....the day of our Lord... But how obliging of the Russians. Now I know that if I go out on Friday night to party and get drunk and celebrate the death of Jesus, I have to get back by at least 10 pm....or risk missing the start of the Third World War.

But seriously though, does Tony Blair know something we should know, when he said the next 48-hours would be critical?

British Prime Minister Tony Blair told reporters in Scotland that the next two days would be “fairly critical” to resolving the standoff over the navy crew, although he gave no details what he meant....

I guess he couldn't eh? Telling people the hostages were about to become human shields wouldn't go down well in Britain .....or Iran.

What with two carrier groups in the Persian Gulf region and another on its way...the Iranians are already a little paranoid...and even crazier than they usually are.

Which makes me wonder why a group of British sailors and marines would be operating in such dangerous waters, with their mother ship, HMS Cornwall, eleven miles away.

Especially since they should have known that the Iranians had tried to grab some hostages...or human shields...before 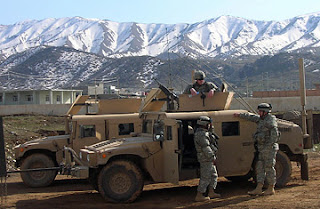 As U.S. and Iraqi soldiers approached the Iranian officer and began speaking with him, a platoon of Iranian soldiers appeared and moved to surround the coalition patrol, taking up positions on high ground. At that point, according to the Army's statement, the Iranian captain told the U.S. and Iraqi soldiers that if they tried to leave they would be fired on. Fearing abduction by the Iranians, U.S. troops moved to go anyway, and fighting broke out.

So after that incident.... was placing British sailors and marines in the situation they found themselves.... an act of incompetence or a provocation designed to get the Iranians to do something crazy? Which would make waging all-out war on them just a little bit easier...

I want to believe it was incompetence, except that George Bush and Tony Blair considered playing the provocation game when they were looking for an excuse to start that other war.

President Bush had plans to lure Saddam Hussein into war by flying an aircraft over Iraq painted in UN colours in the hope he would shoot it down, a book reveals.

“The US was thinking of flying U2 reconnaissance aircraft with fighter cover over Iraq, painted in UN colours. If Saddam fired on them, he would be in breach,” the book reports Mr Bush telling Mr Blair at the meeting.

And anyone who could even think of doing that is capable of anything....

But surely sanity will prevail. And luckily I'm not paranoid. If I was I might think that the real reason George Bush wants Nancy Pelosi out of Syria. .....is because he's planning to bomb it as well.

But nah..... that would be too crazy...so I'm going to stay out all night on Friday and party with the pagans. Although now that I know the exact time the Third World War might begin.