Mission Accomplished and the Fragments of War 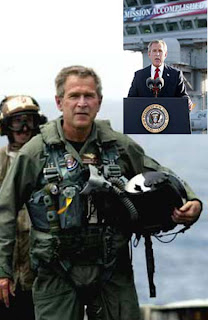 Can it really be four years since the lowly chimp strutted his stuff on the deck of that aircraft carrier like a killer gorilla in the Planet of the Apes? And declared it was Mission Accomplished. It seems like so much longer.

So many people have died since then. So many have been injured, or had their lives ruined. And the horror goes on and on.

What can you say about a war that was constructed out of lies? Where those who knew the truth should have acted. But didn't.

.....if only he had spoken up, if he'd only been a James Bond-style spymaster instead of a timid, fawning bureaucrat. But of course, when it really mattered, at the critical juncture of his seven-year tenure as CIA chief, Tenet said nothing.

What can you say when it's all been said before? Everyone knows it was a crazy fraud... but still the war goes on.

Except put together three fragments of war and let them speak for themselves.....

The despairing words of a famous Baghdad blogger who, like so many Iraqis, has finally had enough.

On a personal note, we've finally decided to leave. I guess I've known we would be leaving for a while now.

We are choosing to leave because the other option is simply a continuation of what has been one long nightmare- stay and wait and try to survive.

There are moments when the injustice of having to leave your country, simply because an imbecile got it into his head to invade it, is overwhelming. It is unfair that in order to survive and live normally, we have to leave our home and what remains of family and friends… And to what?

The angry words of an angry young man...

And the red white and blue words of a wouldbe country singer who supports the troops so much....she wants to hump them...

Yeah....I waited for the punchline too...but it never came. Like the glorious victory in Iraq. It just faded to black and stayed there.

Although after that classic line..."my girly parts are turning into deserts of their own..." what more COULD she say?

Besides the time for words is over. Now is the time for action. History will take care of the war criminals. And the idiots they fooled. Its verdict will be harsh.

But the only mission that counts anymore is to bring the troops home.

I was thinking lately about Riverbend and her situation. I know her family has the wherewithal to leave if they want to and frankly they might as well. It’s a very tough decision but not unreasonable these days.

I’m not sure about making political statements on camera while shirtless, then again, if I had a body like that, I wouldn’t own a shirt.

Yeah it's sad to see her leave but at least it's a choice. So many millions of other Iraqis have been driven into exile at gunpoint it's all so sad.

As for the shirtless blogger I agree that making a staement like that while showing off his muscles might be a little gauche...but I forgive him! :)

Yeah unhappy anniversary indeed. Let's hope that there won't be another one..

IT WAS A HARD ONE

The boldness that became a wreck,
Disaster in unfolding
That no one helms, that no one helms,
But worthy of the scolding
Of all posterity upon
This futile generation
"Mission accomplished" which did swoon
With much prevarication.