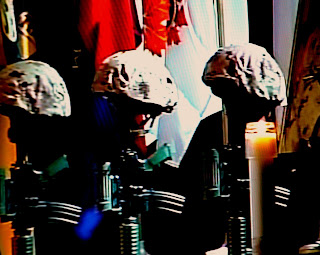 There was an awesome memorial service at CFB Gagetown today. A fitting tribute to the eight soldiers killed in one bloody week in Afghanistan. And some comfort for those they left behind.

It was incredibly moving. But what made it even sadder for me was that even as we mourn the dead soldiers, we're also mourning for the honour of our army and our country.

Because let's not beat about the bush, or fudge the truth, or play cheap politics.

This is a national disgrace.

The Harper government knew from its own officials that prisoners held by Afghan security forces faced the possibility of torture, abuse and extrajudicial killing, The Globe and Mail has learned.

But the government has eradicated every single reference to torture and abuse in prison from a heavily blacked-out version of a report prepared by Canadian diplomats in Kabul.

They can run but they can't hide. If our government, and our top generals, and some of our soldiers in the field knew about the torturers in the Afghan security forces, and still handed prisoners over to them, they are guilty of war crimes.

And if they didn't know they are criminally incompetent. How soon they forget. Doesn't anyone remember the Somalia Affair... and the slow death of Shidane Arone? 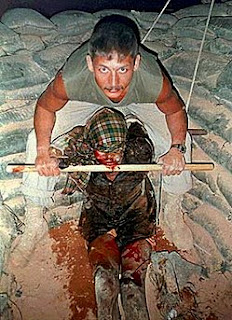 If you hand a prisoner over knowing he will be tortured or killed, you are just as guilty as if you do the dirty work yourself.

You know how I feel about the Taliban. As a gay person I don't have to explain that. As far as I'm concerned the more of those savage religious fanatics we can smoke the better.

And you know how I feel about our dead heroes. Every last one of them.

Back then I thought it was a jolly good show. Now I think it's a tragedy.

Because Canadian soldiers don't treat prisoners they take like that....we don't hand them over to be tortured. Like the war criminals of the Bush regime do.

"Torture and abuse consisted of pulling out fingernails and toenails, burning with hot oil, beatings, sexual humiliation, and sodomy."

If they have, or have looked away, or pretended not to see or know, they have turned this doomed mission into something even worse. They have smeared the once proud reputation of our army, and shamed us in the eyes of the world.

Now it's our Dirty Little War.

I was sure that Afghanistan would be the downfall of the monstrous primped up yankee loving chickenhawk Stephen Harper. And that seems to be happening.

I knew our dead soldiers could never save Afghanistan from itself. But I hoped they might save Canada from the ReformCons. So their sacrifice wouldn't be completely wasted.

I just didn't realize the price would be so high.

And then mourn for our country....