When I got back to the bunker this evening Sebastien said he'd read my last post about Earth Day, and wondered how I could be so cynical about the fate of the planet. When really I'm not.

He said I should have emphasized the positive, like the fact that thousands of people marched in Montreal. And that all over the country a lot of people, including a lot of kids, did what they could to show their love for our poor little blue globe...in small but good ways.

I was going to explain that a cynic is only a disappointed idealist, and that it isn't that bad in English as it would be in French, or that I'm living in the Neocon Republic of Kanada...the new home of the Big Lie. So what the fuck does he expect?

But I've tried them all before..... and with him they don't work.

Or the picture I should have run.... 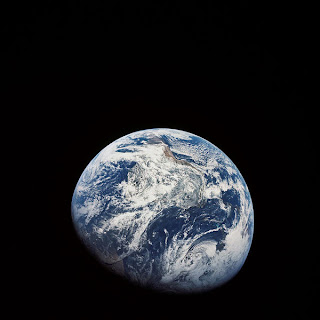 It's the first full view of our planet ever taken by a human.

And here's what the human who took it, Astronaut Bill Anders, had to say about that sight:

"It was the only color we could see in the universe. ... "We're living on a tiny little dust mote in left field on a rather insignificant galaxy. And basically this it for humans. It strikes me that it's a shame that we're squabbling over oil and borders."

And what some other astronauts had to say about our little blue marble.

"If people can see Earth from up here, see it without those borders, see it without any differences in race or religion, they would have a completely different perspective. Because when you see it from that angle, you cannot think of your home or your country. All you can see is one Earth...."

If everyone could see the Earth from outer space does anyone doubt that we wouldn't let greed, crazy profits, cheap politics, and oil stop us from doing everything we could to save it?

Or does anyone think that we won't win the battle to save our planet? Not because we say we want to ..... but because we have no choice. It's the only one we got... 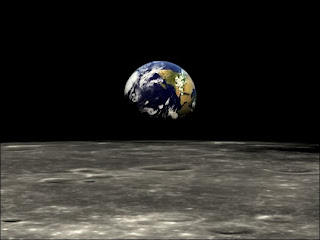 Now all I've got to do is gather up enough courage to ask Sebastien.... I know you hated the post. But didn't you love the crazy video? Huh?

Seems like nobody cares, just wait until the Great Global Warming scam is exposed for the scam it is. The Environuts, by going so gung-ho on a faulty unproven theory at best, are actually doing the biggest disservice to their cause than they can possibly imagine. Good luck for the future of trust towards scientists environmentalists and the rest.
Mark my words, manmade carbon emissions causing global warming will be proven untrue very soon, and it will take decades for anyone to take actions to thwart any real dilemmas this earth is facing.
Thank you Mr. Suzuki.