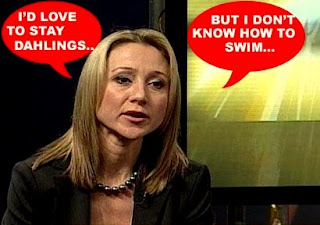 I was sorry to see that Belinda Stronach after giving the Conservatives the finger, and dropping Peter McKay like a hot potato, has now decided to kiss the Liberal party goodbye. Although I'm not sure whether it was a smooch...or a smack.

Belinda Stronach is quitting politics, ending a brief but tumultuous fling that injected a lot of style - if not substance - into the staid Canadian political scene.

And who can blame her? Why go down with a sinking ship, if you can fly serenely over the wreck in your private jet?

I also see that her abrupt departure has, as predicted in the Book of Moron, sent the Blogging Tories into such a fevered state of misogyny and wankitude, they've turned into the Blogging Belindas.

But as for me I'm sorry to see her go. I thought she spoke out well for women's issues, and against the Boy's Club on the Hill. She was great on the gay marriage question. And above all she brought some badly needed excitement into a really boring place....a little life into the House of the Zombie Nerds.

And paid a heavy price...

Her romantic liaisons, her changing hair colour and her fashionable attire kept her in the spotlight almost as often as her political moves.

Just because she's a woman.

People tend to look the other way with men: "boys will be boys" or some such shit. Well, "girls just wanna have fun", eh? Not yet, I'm afraid.

So I was sorry to hear that Stephane Dion didn't take her seriously either. Didn't understand that he needed her way more than she needed him.

But then he doesn't understand a lot of things... 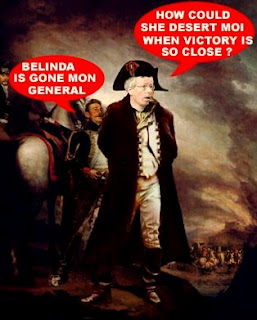 If politics is lonely at the top, Stephane Dion must be finding life downright desolate these days as he all but disappears into the basement of public opinion.

Dion and his dwindling band of supporters don't seem to understand that in Quebec they hate him because he stands for a centralized Canada, instead of a decentralized one. Or because he's seen as an English stooge.

But in large parts of English Canada they hate him just because he's French.

Maybe it's because since the last referendum many English Canadians have developed an almost pathological hatred of Quebec and Quebecers. Or maybe it's just because Dion is such a cartoon character of a snooty French professor.

But when the Tories go after him as Citoyen Dion, it has nothing to do with the citizenship he got from his wife, and everything to do with how he looks and talks. Just like it was for Belinda.

But the poor wacky professor probably doesn't understand that...and I bet nobody dares tell him. He thinks politics is all about ideas...when nowadays it's all about image. And these days in English Canada .....French is out.

If he hasn't learned that by now.

I'm afraid he's going to learn it the hard way.

I can’t stand Dion, I keep hoping he’s a throw away leader because the party didn’t know what else to do. I can’t see him as Prime Minister, his academic background and lack of political experience shows too much, we can’t have a “theoretical” Prime Minister. I look at him and I’m almost tempted to give it away to the Conservatives if they weren’t populated by a bunch of power hungry little anti-Christ freaks from hell.

And while we’re at it, is it asking too much in this country to have someone who speaks English reasonably well? He makes me miss Chretien.

This ends my morning bitch session.

Quebec is hated like France is hated, the french are crybaby wimps.

I think Rae would have been a better as leader, he's got more personality and he's pushier. Dion already seems to be getting pushed around by Harpo, and let's face it, Harper's just a fucking rube. It shouldn't be too hard to put him away.

Hi Bruce!! it's hard to like Dion and as a Quebecer I don't. But he is a decent and smart guy, who actually has a fair amount of experience by now. He does have a tendency to think he is always right, and a very bad temper. But remember he is the son of Leon Dion one of the so-called fathers of modern Quebec nationalism. The guy who came up with the phrase "putting a knife at the throat of English Canada (ie threat of separation) in order to get more autonomy. So he does have some dad issues. The funny part is how a man that smart can have such problems learning English. But please Bruce don't say you would ever consider voting for Harper and his gang. Because believe me he may be acting like a liberal now....but if he ever gets a majority, he will take this country so far right in such a little time that it will seem like a coup d'etat.
But yeah the quality of Canadian politicians these days is depressing....

Anonymous...I may have some problems myself with the snooty French from France...just like Quebecers do BTW. But the French-speaking people of this land are a national treasure as far as I'm concerned...the more we like each other the stronger this country
will be...

Hi JJ!! I don't know all the candidates seemed like losers to me.I thought Kennedy and Dryden might make good candidates once...but they didn't work out.
As for Harper I'm more afraid than you are. He's a very smart but wonky manipulator. And he has positioned himself as the champion of decentralization, which is very popular for several provincial governments not just Quebec. Which unfortunately also ties in with Harper's plans to gut govermment period. So he may be riding the wave of history. And when Canadians discover what he's really after, it will be too late.
But you know me...I'm not exactly a sunny optimist :)

You know I would never vote for Harper and his gang, and I actually do know that Dion is a decent man. I guess I was just venting frustration that having Dion as the leader of the Liberals keeps the political situation in this country in stasis with the potential for giving Harper a majority. Even Harpers continuous attacks on Dion only serve to make me like Conservatives less.