Prince Harry and the Road to Armadillo 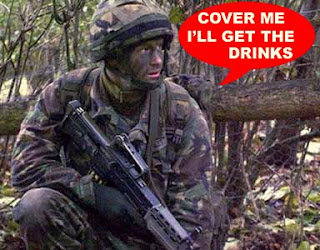 Well they can't say I didn't warn them. I even wrote a letter to the Queen begging her to stop them from sending my beloved Prince Harry to Iraq. But nobody listened to me so now look what's happened.

He's damned if he doesn't go

These must be nervous days for the Queen but if Britain's monarchy still has any serious meaning left in it at all then Prince Harry should be despatched to Iraq. If he is barred from serving with his Blues and Royals regiment then there remains little point in holding on to the Royal Family.

And he's doomed if he does.

‘We are awaiting the arrival of the young handsome spoilt prince with bated breath and we confidently expect he will come out into the open on the battlefield. We will be generous with him. For we will return him to his grandmother but without ears.”

"If Harry were to go to Iraq, and be captured by one of the many armed factions openly after his blood and his name, he would be very lucky to lose only his ears. He would be much more likely to lose his head, horribly and publicly, on footage seen repeatedly all over the world, across the internet, after weeks or months of public humiliation and torture." 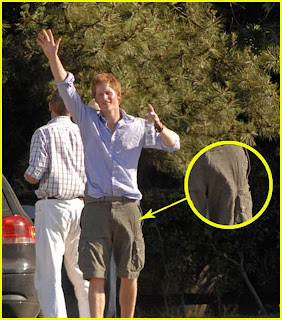 So I'm glad they are sending all those soldiers there to protect him.......and the crown jewels.....and all the poor sods who have to fight on the same side as the Bullet Magnet. And really close to him. Their loved ones aren't too happy about that....

Why risk the lives of prince Harry and the people who are in the tank with him? If I [were] the wife of one of them I would push him down the stairs so he doesn't have to go.'

Although now I'm not sure those extra troops are really needed.

I just saw this video made by some British squaddies in Iraq.

And they seem to be having a jolly good time...

Well that changes everything. I think Prince Harry is going to fit in fine. In fact I'm quite optimistic.

I can see him playing a starring role in the remake of that video.

Except that this time when they fling open the door of the portable toilet there will be Harry....sitting on the throne as drunk as a skunk. A nazi helmet tilted rakishly on his head. His pants around his ankles. A cigarette dangling loosely from his lips. One hand on a beer. And the other hand on his enormous cock.

The way I see it....if that doesn't end Britain's involvement in Iraq, AND bring down the monarchy.

I'm curious as to what Sebastien, with his military background, thinks of the wee prince possibly being put on front-line duty.

I forgot about that video, too funny. Hell, after watching that, I could fit in, good god.

Hi jay!! sebastien is away...but I'm sure he would say that if he is a soldier he should serve. But he doesn't know as much about the situation in Basra as I do. It's gotten so bad that it's like a combination of the Alamo and Beau Geste. British troops are encouraged NOT to walk around their own base at night in case they are kidnapped by Iraqi police or army members!!
I'm afraid the only thing that's going to save Harry is if the next time he stumbles out of a bar in the West End, and falls into the gutter....he lands on his head :)

Hi Bruce!!! yeah I love it. I thought those squaddies choreographed it great.And yeah some of those guys are cute. Altho for really hot ones you have to try the British Navy. When I was a little boy my mum wanted me to go to Dartmouth the navy officer school. Just as well I didn't. It would been fun. But it would have been short.... :)