Another wingnut bites the dust

Oh what a beautiful day. I couldn't stop humming that old Sinatra song. Except that I changed some of the lyrics. Now instead of going "Oops there goes that rubber tree plant." It goes "Oops there goes another wingnut Con...Ker Plop."

And what a way to plop. Can you believe Vellacott's sanctimonious letter? (pdf)

"I know there is a cost, but I can do no other, because this life is too short, and ultimately I long to hear 'Well Done!' from the One who is over all, at the time when it matters most!"

Well boo hoo hoo. Who does he think he is? Jesus? Somebody get him a cross. I got the hammer and the nails...

Oh wait. I see he says he's going to stop bashing injuns and concentrate on bashing fags. Forget the cross. Just put him in a straitjacket and send him back to Saskatoon. Canada's Mississippi. Where they keep re-electing this homophobic redneck nutbar. Over and over again. Guess what it says about them?

But it gets worse...Who do you think the ReformCons are thinking of replacing him with? This guy! Yes, the guy who suggested that journalists be arrested. What a disgrace. How low can these scumbuckets go? Is this the most wingbat government in Canadian history or what?

What a bunch of losers. But at least Vellacott was forced to resign. Now when is Rona Ambrose going to resign from this committee? I know she wants to go to Europe. But she can buy her fucking plane ticket herself. Or get one of those greasy lobbyists to buy it for her.With all her oil industry friends she should still be able to travel first class. It didn't take long for those Tory porkers to get their snouts in the trough. Did it? Oink.Oink. It takes a Con piggy to really suck it up. 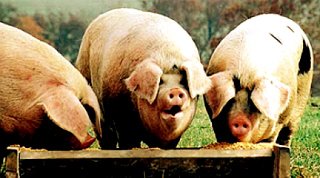 But what on earth does Harper's little pet Ambrose think she is doing chairing that U.N. committee after murdering Kyoto?

It's bad enough making a mockery out of our Parliamentary system by appointing an anti-native bigot like Vellacott to chair a committee on aboriginal affairs. But how dare Ambrose think she can take her little comedy act all the way to the United Nations. Will that dumbo please resign and get back to the shallow end of the pool --before we're the laughingstock of the civilized world.

Oh boy. The wheels are really falling off the Harper chuckwagon. It must be so frustrating. If they held an election today they would probably win a majority. But they can't. Ouch. And the more they wait, the more Canadians will realize that they are not dealing with a Canadian government. They're dealing with a yankee wannabe Klown Posse. Bye Bye majority. So sorry Cons. So close and yet so far.

And there are so many other wingnuts waiting to be exposed. I'm lovin it! By the time we're finished with these wackos, all they'll be able to do is pile into this jalopy and chug all the way back to Alberta and Saskatchewan. 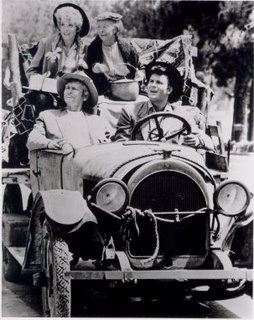 While the decent freedom loving people of Canada line the streets and jeer. Bye bye bubbas. Doncha dare come back. You hear?

Although that means I'll have to change those damm lyrics again.

"Oops there goes another wingnut Con..."

Simon, Mayes is an excellent choice for this post. I live in Maye's riding. I've seen this dude in action and it doesn't take much to unmuzzle him, believe me. At the January candidates forum a local feminist activist had him totally unglued on abortion and he blamed the "sea of red badges" and NDP supporters from Salmon Arm for trying to smear him. Uh, no, he was too much of a blithering idiot to realize it was his unbelievably stupid comments that got the crowd's jeers. Bring Mayes on, he won't last long, he has a big, bigoted, racist mouth that can't stay shut. Where do I vote him in!

Waterboy I'm jealous. A wingnut in your own backyard. All I got is Olivia Chow...(yawn) I think you've got the right idea. Wind this wingnut up and let him speak his mind. Bombard him with e-mails telling him he's doing the Lord's work. Whip him up into a frenzy. And don't forget to get it all on video Give them enough tape and they'll hang themselves...

Not just one, but two. An hour or so south of here we have none other than Stockwell Day. The beautiful scenery of the Okanagan is unfortunately marred by an undercurrent of religious fundamentalism that lurks in the bowels of the churches on every street corner. The area is roughly a 50-50 split between fundamentalists and left of centre liberals. Unfortunately, the wing nuts come out in droves to vote and they dominate the political landscape here. Too bad, because the fundamentalists ruin what is otherwise a recreational paradise. Even the former Kelowna Mayor, Walter Gray, was a phoney, born again thumper complete with the bad hair and insincere smile. He went as far as not endorsing any declarations to get out of gay pride a few years back, and he also has a druggie son, excommunicated from the church of course. Far be it from a fundie church to actually help someone. Anyway, I'll give you Mayes and Day, you give me Olivia Chow, deal?

Hmmm...it's a generous offer, but I'm afraid I must say no. I figure if I bend Olivia's ear enough she might pass on some of my missives to Jack. And the NDP might finally start to kick some Conservative ass. Instead of just kicking the idiot Liberals when they're down and out.
So I'm afraid you're going to have to handle those two wingnuts yourself waterboy. But when it comes to kicking ass, think about it this way. Double the trouble means double the fun!

P.S. you do live in a beautiful part of the country. I'm flown over it several times. But never touched down.