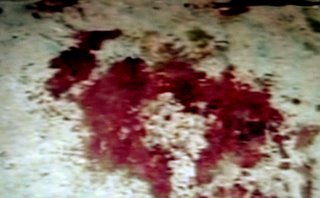 The cover-up will soon be over. The BBC is reporting tonight that several U.S. marines will be court-martialled for the massacre at Haditha. Not that the U.S. military had much choice. Not after Iraq's new ambassador to the United States went to the White House to present his credentials today. And then went on CNN to talk about how the marines murdered his cousin. Oops.Ouch.Talk about bad timing.

What happened in Haditha is an ugly story. I was haunted today by the account of this young survivor. 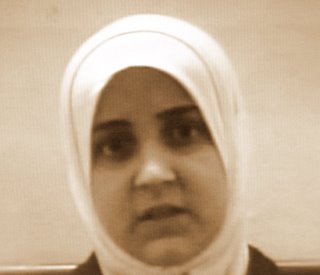 She described how a group of marines entered her house after the IED went off, and went on a murderous rampage. Shot her mother and father, two sisters and her brother as he tried to hide under a bed.

Interestingly enough, at one point in the interview she seems to suggest she knew the IED was about to go off. But hey what are you supposed to do when insurgents plant an IED near your house in a place like Haditha. Call the Iraqi police?

And oh yes, she wants those responsible to be tortured and then killed. What a little darling. But who can blame her for thinking the Americans torture their own? After what they did at Abu Ghraib.

But that's the point isn't it? That's why it's going to hurt Chimp Bush so much. This isn't just an isolated incident. It's just the latest in a litany of horrors, in a crazy war with apparently no end. This massacre may well mark a tipping point like the My Lai massacre did during the war in Vietnam.

Mark the moment when most Americans finally agree that all this suffering just isn't worth it.

Chimp Bush will come under enormous pressure to declare victory and get the hell out. And he isn't the only one. So is Bush's poodle Tony Blair.

And what happens in Iraq is bound to affect what happens in Afghanistan. And that means us. I suppose the Americans could re-deploy to Afghanistan and we might finally have enough troops to do the job. Because we don't have them now.The warning signs are everywhere. Yikes. When they miss the Russians you know we're in trouble.

But I suspect that when the Americans start pulling out of Iraq, or into their super bases, the American public won't want them sent to another distant battlefield. T And that will leave all kinds of foreign fighters from that terrorist breeding ground in Iraq, free to swarm into Afghanistan. And bomb us to smithereens. Two years could be a long time.

The problem in Afghanistan, just like Iraq, is that there were never enough boots on the ground. The U.S. military is running out of soldiers. It's gotten so bad they're using 45-year-old privates as well as criminals. If you don't have enough good troops in a counter-insurgency war. And you can't tell the good guys from the bad guys. And your nerves are rattled by IEDs. Sooner or later you start killing them all.

Some of the Pentagon's top generals warned about screwing up. But they were ignored or put down.

So why am I worried? Surely we Canadians can learn from the mistakes the Americans made?

Turns out our government doesn't want hear from General Zinni either. Even though history has proved him right.

See what I mean?

To paraphrase the old philosopher. If you don't learn from your mistakes or the mistakes of others.

You're condemned to repeat them over and over again.

How long will it be before we have our little massacre?

Wise men learn from past mistakes.

Then we have Harper, who is so sure of himself that he’s convinced he can do a better job than everyone who came before him. He’s not going to make the same mistakes as all those lesser mortals, he’s too good for that.

What’s the definition of arrogant fool?

I agree, but the good news is that Canadians are starting to figure out his little act. And they don't like what they see. Seventy per cent of them don't want him to get a majority. By acting like he had a majority instead of a minority he has overplayed his hand. He couldn't help himself. But now it's going to cost him...

How can my words communicate
The things that I have seen?
Civilians may well pose or prate,
Their souls as though pristine;

But I have seen the truth of it
Which I may never tell,
Deserving of my Maker´s spit
And getting sent to hell:

Death was ubiquitous around
In which we did take part,
While lily-lives I would astound
By tearing out the heart.

To see the limp and mangled thing
Returning from the void
A kind of stare: dead child, we bring
Terror in war deployed.

Dead bodies smushed upon the road
Because some Fedayeen
Were hid nearby; yet what we sowed
Can never be made clean.

Civilians back at home believe
The value of diversion,
But game-shows on TV deceive
While I have true immersion.

Therefore I know, if there be God,
Then I am most deserving
To go to hell, because abroad
In duty never swerving,

I served my country and I did
What I was ordered to,
The truth of which, forever hid
Nor will I tell to you.