Riding a bus to nowhere 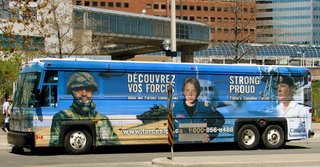 I was out for a stroll when I came across this nifty bus. What an inspiring sight. I would follow the guy on the right through the gates of hell. Or even into the Catholic Church. But after thinking it over I decided not to jump onboard. I wasn't sure where I might end up. Tiptoeing through some dusty minefield in Afganistan. Or worse. Goosestepping through the corridors of Parliament as a member of President Harper's Pretorian Guard. Sworn to serve and protect him. Jawohl mein Leader! We are with you in ze bunker!

Wow. Wouldn't that be ironic?

Speaking of Great Leader I see he was in fine form today. Defending his phony so called budget. He called it :

"The best NEWS budget that this country has ever seen."

Huh? What a Freudian slip. Why doesn't he just come out and call it propaganda? A shallow votebuying scheme aimed at fooling voters into giving the Conservatives a majority. Andrew Coyne calls the budget measures "policiettes dainty morsels of cash..." Jeffey Simpson calls the whole thing a "show" And says it's "popcorn and candy now, steak and potatoes later." To which I would add... with shit for dessert.

Although if we're talking food I like to think of this budget as a potluck stew. You never know what little tidbits you might find in there. All you've got to to do is throw away your children's future. Or the planet's future. Put your head in a trough. And slurp.

Of course, if you're this right-wing politician you can always put your head in a bag and burp. Believe it or not this bozo was thinking of running for Mayor. Now he'll probably run for Premier of Alberta.

Anyway... all we've got to remember from this budget charade is that Gilles Duceppe is going to try to keep Harper in power as long as he can. With polls like this one he has no choice. The funniest thing today was listening to poor Duceppe trying to come up with excuses for not bringing the government down.

And that as soon as this budget is passed, and the cheques start to go out, Harper will be going for an election as soon as he can. He's blown his wad. He won't have as many goodies to give out as he did this time.The polls are good --particularly in Quebec. The Liberals are in disarray. The NDP's still all over the place. They don't have a brand they can sell on tv. Why wouldn't Harper be itching to go? He can probably smell that majority.

It must be positively stinky. Just like this Mayor's toilet. He says if it's yellow let it mellow. I say if it's Tory Blue it must be poo. So flush it.

Anyway something has got to give. The longer Harper waits the more he has to deliver. The greater the chance that something might go wrong. But how will he get Duceppe out of his corner, without alienating Quebec?It should be a fascinating spectacle. The separatist leader trying to prop up the Harper government.

While Harper does his best to bring his own government down.

Talk about turning Canada upside down.

And he doesn't even have a majority yet....

Oh yeah. If you're still wondering about that bus.

Finally a government that cares about its real people instead of the losers, that hang around Church St, whining for their next benefit cheque.

I have no idea what you're talking about. I don't ever go to Church street. And we're the gay people. Not the welfare bums. Try not to get your enemies mixed up. Although you right wingers hate so many people, so I'm really not surprised. But the only "real" people Harper cares about are the Yankees he blows. Any more of that hanky panky and we'll have to arrest him for treason!