Resistance and the new meaning of cool 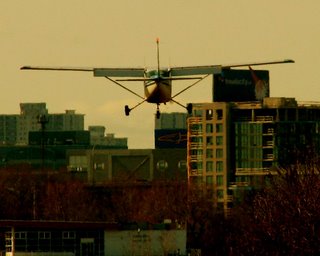 I want to apologize to my three or four faithful readers for taking a blogging break. But sometimes the blogosphere, by concentrating on one issue at a time, can fragment reality a little too much. I just had to get away from the daily slugfest. Fly though a clear blue sky. Take a few deep breaths. Think about the Big Picture. And what's really happening to the country I know and love. The Conservatives have only been in power for about four months. And already I can hardly recognize it. Except from high above.

What other government would sell us out to the Americans, and then threaten lumber producers to keep them from complaining? What other government would employ such scorched earth tactics to try to destroy the opposition?Or enlist the help of Republican advisers to give them tips on how to turn Canada into a Yankee Mini-Me. The kind Cindy Sheehan, who lost her son for nothing, warns us about.

And it's not just the Yankee neocons who are helping the Harperites, so are the Aussie right-wingers! Well hang me kangaroo down sport. Since when do the foreign governments tell our government what to do? Is this an international right-wing conspiracy or what? You don't have to fly too high to know there's something terribly wrong with this picture.

And then there's the weird Stephen Harper factor. In Canada Prime Ministers are supposed to act like Prime Ministers. Not like power crazed, control freak, American Presidents. Who like to portray themselves as warriors, but dishonour our war dead, and are all talk and no action on Darfur. Who ride freight elevators to dodge the media, muzzle their cabinet ministers and MPs, kill Kyoto, and hire ex-cons as their advisers.In the Globe this weekend Ian Brown called Harper Big Daddy. Others call him Mr President or Great Leader. Isn't it stark raving obvious that if Canadians give him a majority they'll get themselves a tyrant?

Oh yeah. Something is not quite right in Canada these days. An alien form is growing in the heart of our government. If we don't stop it in its tracks we'll eventually lose our country. Doing nothing to try to stop this from happening is not an option. Supporting these yankee wannabes because of one issue or another is bullshit. It's collaborating with them in the destruction of our Canadian way of life. And that's nothing less than treason. At least in my book.

So when I saw this story, I just about had a cow.

So it isn't cool to be cool anymore. Now it's hip to be square. And even if you're oppressed and marginalized you should never get angry. Just be nicey nicey and try to fit in.Or as one researcher put it:


"Historically, coolness was a marginalized construct, so if you're oppressed or marginalized, coolness is a way for you to deal with the situation by being detached, or by being aloof, keeping a facade of rebellion and toughness. That was cool. Not any more."


Uh oh. Talk about a blow to my self esteem. I think I can modestly say that I have many amazing qualities, but being amazingly cool, while being incredibly angry, is right at the top of my list. Or was. Now I don't know what to think.

Except, of course, that those twenty-something Western idiots who filled out the survey were obviously completely out of it. Dudes listen carefully. Just because you think you're hot doesn't mean you're cool. Will somebody please tell these oafs that life isn't a game.

I have to believe that's what happened. The alternative is just too awful. I just can't imagine myself wagging my tail like an emotional support dog.
As my country is destroyed. Or doing a soft shoe shuffle, just to try to fit in. Like this little gollywog. 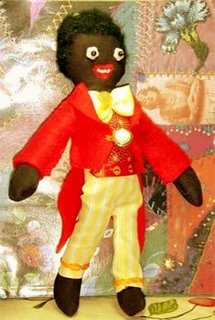 But as for kicking up my heels, coolness be damned.

I think I'd rather kick neo-con ass. Help save my country. And save the soft shoe shuffle for the day I can dance on their graves.

After all. Once you've seen the big picture. Understand what they really want to do. What their hidden and very wingnut agenda is really all about.

Then forget about fitting in. Resistance is the only way to go. If you love this country.

Anything less is treason...