Well that explains it. Yesterday I wondered why President Harper would fly all the way to Vancouver to announce a ban on street racing. I mean hasn't he ever driven on Toronto's 401? Today I discovered that of course that's not why he was really there. He was really there to attend this ReformCon Roast. Funny how pig and roast go together. Too bad the taxpayers have to foot the porky bill. Oink.Oink.

But I don't want to do yet another post about President Harper. I know he's acting like a half crazy dictator, and that he is threatening to use a majority to change Canada forever. But it is the weekend after all. So I'd rather talk about something even more important to our survival. The state of Chimp Bush's marriage. 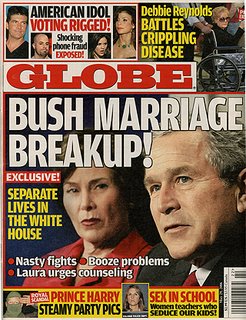 "They barely talk to each other....They argue when they do speak."
After their last fight over booze they just stopped talking period."

Uh Oh. Now don't get me wrong. I'm not really interested in the Chimp's love life (shudder). And I'm sure I'd find Prince Harry's steamy party pics far more stimulating. The Sex in School story sounds good too.Although I'm sure if I read it I'd feel robbed, because I never had teachers like that. Too bad.

But the very notion that the Chimp could be back on the bottle makes me want to run for cover. Or find some way to make my bunker invisible. God help me Missy Mammy. I'm haunted by this story.

"When the levees broke in New Orleans, it apparently made him reach for a shot," said one insider. "He poured himself a Texas-sized shot of straight whiskey and tossed it back."

"The First Lady was shocked and shouted: 'Stop George'!

"Laura gave him an ultimatum: 'It's Jim Beam or me.'

Holy Hillbilly! Beam me up bubbah.... I know there are journalistic principles involved. But I can't help but worry about what he must be up to when Laura isn't around. Glug. Glug. Glug. Snort. Snort. Or what could happen if he was looped and alone with Dick Cheney .

"Georgie we gotta do something about Iran and pronto"

"Fucking right Chainman....I hate those fucking bastards...screw'em...fuck'em...they're laughing at me...I'm looking as weak as my daddy...nuke'em tomorrow...and bomb Canada too (burp) Why should we pay for their fucking oil when we can.......er... bomb it?" (vomit)

Yikes. What a problem. How come we can figure out the one about the chicken and the egg? But we can't do anything about the problem of monkeys and booze?

Except keep our fingers crossed that George chooses Laura instead of Jim. The way things are going for the Chimp I'm not optimistic...

But I don't want to end on a downer note. As I said before, it is the weekend after all. In a few days the humidex in Toronto is expected to reach 40 degrees. It's the kind of heat that might make us envy this naked Sherpa.

But is just about perfect to say goodbye to this reggae star. 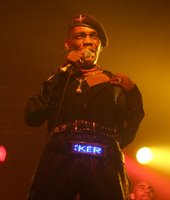 Poor Desmond. He was a reggae pioneer. But he only had a few hits. Like " Israelites" which still makes me leap out of my chair and happy dance across the room.

After that his career really went nowhere. He had money problems. But he paved the way for other reggae giants like Bob Marley and Peter Tosh. Other giants like him.

And one of his hits was a classic version of Jimmy Cliff's "You Can Get if you Really Want."

Which strikes me as the perfect tune for a steamy weekend.

Forget our loser President. Have some fun.

Do it for Desmond.

This week's life lesson is know your enemy.

I would love to see the Chimp and Stepford Laura get divorced. So much for being good " christians" and throw their family values bigotry garbage out the window. That would be special.

A divorce might be nice and fun for us. But, I've often thought that a coctail might make George a more honest man than he is now. Seems the boy really needs them instead of following rules he doesn't understand otherwise.

Actually bc boy I kind of like Laura despite her really bad taste in men.She seems fairly human and smart (for a Republican) And a few weeks ago she actually criticized the Constitutional Marriage Ban wingnuts accusing them of playing politics.Besides we need her to keep the Chimp under control at least until he's out of office. But Bruce you do have a point. I never thought of it that way. I think you're right. Cold turkey is not for everyone. Maybe Laura could allow him one spiked hot Toddy before he goes to bed at night.
But only one. The thought of a desperate poll plummeting Prez looped out of his mind with his finger on the nuclear button still gives me nightmares!