Harper's crazy war on the media

Well the clock on the Peace Tower may be still stuck at 7:30. But surely we must be getting close to midnight as far as Canada is concerned. As evidence I offer up this bizarre exchange between President Harper and the CBC's wild man in Vancouver, Terry Milewski: The latest episode in Harper's crazy war on the dumbos from the press gallery.

"With respect Prime Minister, isn't it the case that it just isn't true what you just said. The press gallery as I understand, takes the position that they're entitled to pick who asks the questions. Your government as I understand is insisting that your staff should pick who should ask the questions as Dimitri (Dimitri Soudas, Harper's Deputy Press Secretary) just did when he called on me."

"Well when we set up a press conference we set up a press conference. It's my view if journalists want to ask questions they should be able to. It's not up to the press gallery to make that decision for them. You know as they say it's unfortunate for those who want to ask questions. And I think a lot do. But as they say they don't get to ask their questions.I don't think anyone outside Ottawa cares. And I think that's what's unfortunate."

"Why is it so important for your staff to pick who asks the questions?"

Fairchild Television instead of the national media? Wow are things getting weird. Forget about the da Vinci Code now we've got Dimitri's List. And what was Harper going on about? First he asks lobbyists to accuse journalists of being lazy. Now he says nobody cares. Does he really think Canadians are that stupid?And why did he fly all the way to Vancouver to announce a ban on street racing?
Are the wheels coming off this baby or what? 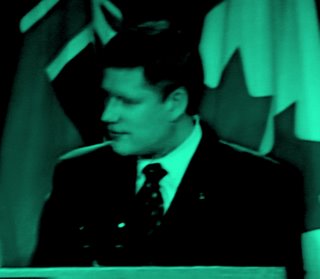 But at least all the fuss about gagging and muzzling and managing the message is making some in the media notice how Harper is beginning to show his true colours. The stuff I've been warning you about. As Lawrence Martin wrote in his Globe column today

"The soft and soothing centrist rhetoric of the election campaign has been replaced by a deeper conservative theology...he is beginning to sound like the rawer conservative he used to be."

The mask is finally slipping. Maybe the fact that he's so close to a majority, and yet so far is driving Harper over the edge. Maybe the stress of running the whole government himself is getting to him. I mean isn't banning street racing a Mayor's job?

Hmm...If Harper doesn't watch it he could yet become a liability rather than an asset. Maybe he is going to have a hard landing after all. He might even blow that majority right out of the water. When it should be in the bag.

Wouldn't that be fun? But for now I'll just enjoy watching him slowly crack up.

Because if he keeps on going where he's going. Keeps on acting like a crazy dictator.

I don't know what Harper is thinking with this one, he's going to lose. Next election he'll have to fight for coverage.

I hope you're right. But I'm afraid they media may overcompensate to make up for this little debacle. Just to prove they're not biased. Remember they were the ones who let Canadians down during the last election by failing to warn them what Harper was really like. They just went along for the ride. As a result many Canadians are probably surprised by Harper's authoritarian streak. If the media had done their job properly they wouldn't have been. The big question is will the media have the guts to do what needs to be done next time? I doubt it.
But I still hope you're right!

This thing could go two ways as I see it. The press could 1) be vindicitve as hell and screw Harper over next time, thus giving more coverage to progressive voices, or 2) Taking it on the chin and cuddling up to him like never before.

I think it will be based on poll numbers when we get closer to the election. If the media senses that a Harper majority is close at hand, then they will continue to same lack luster journalism we saw last time, hoping not to be shut out for 4 whole years. If they sense another minority government, liberal or Tory, they might actually stick it to Harper.

I think we'll have to wait and see on this one Simon.