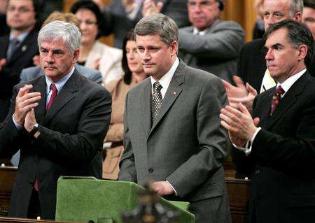 I'm going to try to stay away from cheap politics tonight. If you've ever managed to get through one of my raging rants you know that won't be easy. But tonight I just have to show a little class. To honour the latest brave soldier to die in Afghanistan. Because she had a lot of class. And because I don't want to be accused like Prime Minister Harper was today of showing no class at all. By using her death as a political club.

But for me there was an even more jarring moment outside the Commons today. When Harper, after abruptly cancelling a newser, decided to speak to reporters after all. Although it was pretty obvious that he really didn't want to. Later James Travers described Harper's mood as "petulant." But I thought he looked really angry and stressed. His face was puffy and pale. And I found the look in his eyes even more disturbing than usual.

After delivering a short diatribe aimed at the Liberals, he turned to go when one of the reporters asked him "aren't you going to say anything about the dead soldier." Harper stopped dead in his tracks. " Oh yeah, the dead soldier," he said. Or something like that. But it was the look on his face that was most telling. Instead of being grateful for the chance to honour our dead hero. He seemed annoyed. As if he was pissed off at her for dying so inconveniently on the day of the Afghanistan debate. As if it was some kind of Liberal plot.

If that doesn't say it all I don't know what does.

As for Afghanistan, I'll save my thoughts on that for another time. Except to say that the government should have tried to reach a compromise with the other parties. Instead of just playing politics. If they had maybe everyone could have agreed to keep our troops there for at least one more year. With Parliament to decide by a certain time next year whether they stay any longer.

That way the troops would be able to fully develop their mission, NATO would get ample warning that we might pullout, and most importantly we would all get a better idea about what exactly we're facing there. Whether we can really make a difference. And what it's really going to cost.

That way we could hear from our soldiers who are doing the fighting. And hear whether they still think it's still worth more Canadian dead. Or more shattered lives.

We could have had a real national debate. And in the end Parliament could have made a more informed choice. The government may have won tonight. But in a way we all lost. Two years is a long time...

But we can talk about all of that some other day. I just want to end by saying something else about Capt. Nichola Goddard.

I feel really sad for such a young life lost. But I also feel incredibly proud of her, and our country.

Proud that she showed the world that Canada is a country where women can be anything they want. Including brave soldiers in front line combat.

Proud that she died fighting to help bring freedom, and schools, and clinics to the women of Afghanistan. So hopefully one day little girls there can be anything they want too.

However we feel about the war. However disgusted we might be over the rushed and unseemly nature of the debate.

I think we can all be proud of that...