Oh great. Now I know the Conservatives are really back. It's been ages since they last delivered a federal budget. But as soon as I heard this one I was struck by a bad case of deja vu. They may have changed a few words. But it's the same old tune. Greed is good. Government is bad. Help the rich. Fuck the the poor. The only thing they've changed is the monkey... 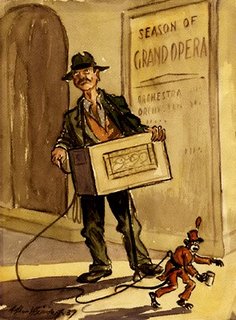 The one who is trying to make monkeys out of us all.By boasting that he's slashing personal taxes. When most Canadians, the ones who aren't rich, will pay more.

Or by trying to fool people into thinking that he's going to give them loads of money. So they can look away while he slaughters the national daycare plan. To please his wingnut supporters who just want to keep women at home.

But enough of this budget. This news is far more important.

What this means is that it doesn't really matter what the rest of Canada does. If Harper can just hold his support in English Canada. And this feel good budget is probably enough to do that. Quebecers will hand him enough seats for a crushing majority. So he can show his true colours. And turn Canada upside down.

I'm glad that some in the dumbo media have woken up to the threat. As Richard Gwyn wrote in the Toronto Star:

But it's probably too late. The referendum chickens are coming home to roost.

The Liberal Party in Quebec is in ruins. All that beating up on separatists has backfired, just as I always knew it would. People forget it wasn't just the sponsorship program that doomed the Liberals. Their tough guy act might have been a big hit in English Canada. But it grated on Quebecers. Martin had a chance to change that but he didn't. The moment he tried to mug Doucette during the last campaign debates, I knew he was done. So when Harper came around sounding so sweet and reasonable I knew Quebecers would go for him like a trout. Why wouldn't they?

Who are they supposed to vote for? Someone from the old hardline gang like Stephane Dion? Just having someone like him running to be leader probably costs the Liberals in Quebec ten points or more.

Eleven years after the last referendum, Quebecers hold the fate of Canada, as we know it, in their hands again.

They just want more autonomy. If they can get it without another referendum all the better. Why shouldn't they?

They didn't plan on giving Harper a majority. He was just there at the right time to profit from what had happened before. From what was done and from what was not done.

It was an accident of history. That might change a country forever.

By giving Harper and his radical right wingers years to mangle it beyond recognition.

Until Quebecers are so disgusted they separate.

Leaving historians to wonder. Who was the real monkey?

Today's Lapresse shows Dion as the most popular candidate in Quebec. Warren Kinsella has a link.

Yeah but only 15 per cent of Quebecers support him. And he only does better among the Liberals because almost 50 per cent of them believe the next leader should be a Quebecer. And more than thirty per cent of the Liberals say they don't care who wins. Don't bother looking for a pulse. The Liberal Party in Quebec is dead. At least for quite a while...