Well isn't that nice? What a slap in the face. It turns out all that bowing and scraping, sucking and blowing by the Harper administration hasn't made the yankees love us after all. Some of them apparently hate us so much, they're booing our anthem. And worse than that. They're trying to blame it on us!

But that wasn't the only place they were booing us. Rona Ambrose's little junket to Bonn also went down like a lead balloon. I wonder why. Maybe delegates just didn't understand what she's doing chairing a Kyoto conference while declaring that Kyoto doesn't work.

Or what she was doing begging for Canada to be excused because we love our cars and don't want to live in the dark.Boo hoo hoo. Wow. What a nerve. How embarrassing. What a clown. Any more of this Konservative Komedy act on the international stage and forget about the little maple leafs on our backpacks. We'll all have to wear one of these when we travel abroad. 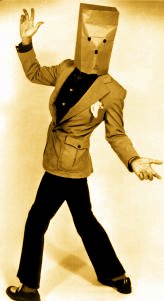 Although the ones wearing the bag today were the religious wingnuts who make up the Conservative Party base.To try to hide the foam spewing out of their mouths over this story.

Just like the decision to proclaim Rona Ambrose the sexiest female MP on the hill, for the second year in a row, has everything to do with Big Daddy Harper. At least she says it does. What I want to know is did our wannabe President order his trained seals to vote for his little pet Ambrose? Or did he just vote for her himself? Over and over again. 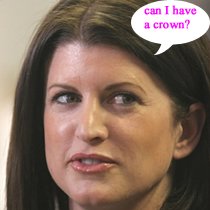 Ugh. What a mistake. You can't be sexy and help murder the planet. Sex is life not death. Gilles Duceppe called her Kyoto Komedy act funny today:

"She looks like she's participating in a kind of Festival of Laughs..."

But he's wrong too.

Making a mockery out of Kyoto is no joke. Not when it leaves us choking in our own fumes, and kills our children slowly. Not when it means the end of entire countries. Not when some believe it could cause environmental genocide. In a place that has already suffered too much.

You see that's the problem with these crazy Klown Konservatives. They may be funny to watch in action. You can split your sides laughing. When you're not cringing with embarrassment. But all that idiot greed, all that neocon nonsense always leads to the same dead end. Proves the same point. Over and over again.

Don't forget to pick up your paper bag...

Rona did vote in favour of SSM, I can give her a high five for that. On the environment, she is are too controlled by President Harper to make any meaningful contribution to the two necessities of life: clean air and clean drinking water. She may do better as a liberal.