Why The Con Monster Doug Ford Should Resign 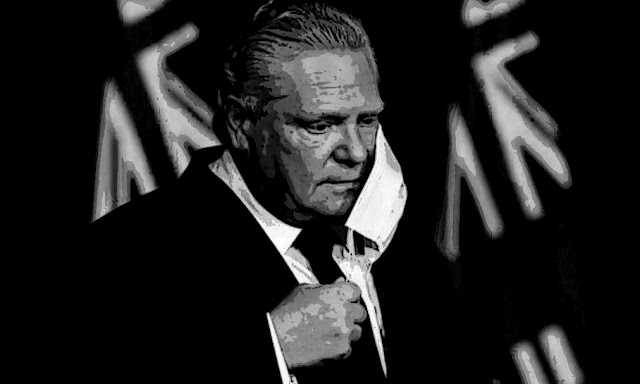 He played Russian roulette with the deadly Covid variants, and lost.

Now Ontario is facing a human catastrophe that could result in as many as 30,000 Covid cases a day.

Its hospitals, its ICU units, and its health workers are struggling to keep from collapsing. 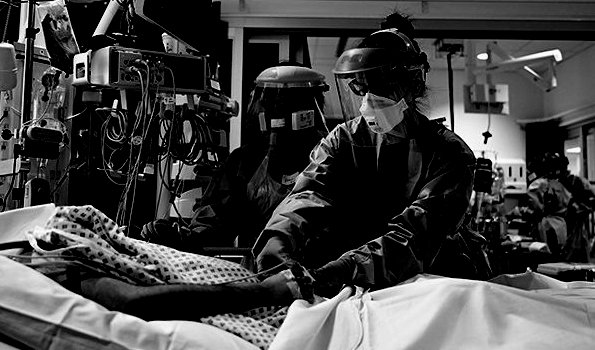 After Doug Ford and his criminal Con government ignored warnings from doctors. 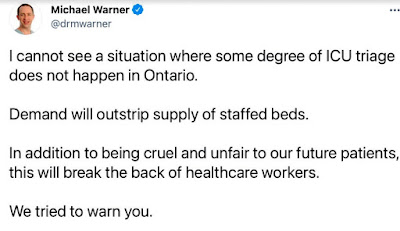 And now Ford has no idea what he is doing.

Closing down playgrounds and ordering the police to enforce his stay at home order.

Only to reverse himself the next day.

And never stops trying to blame Justin Trudeau for a lack of vaccines, when for the 11th straight day Canada has been second in the G20. 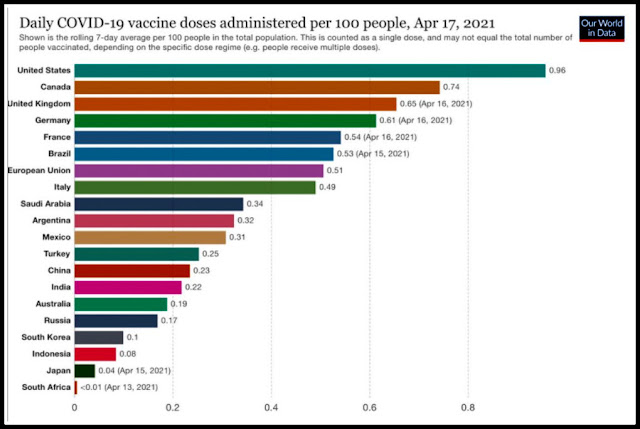 While refusing to accept any help offered by Trudeau, which only makes it clear he's just a Con clown playing grubby political games.

Who if he had any decency should resign. Not just for what he isn't doing.

As he deflected blame and lost the plot, Ford made no mention of paid sick days, which advocates have been begging for. Indeed, aside from promising to improve hot-spot vaccination distribution and limit interprovincial travel, he offered little of value to fight Ontario’s third wave, as cases surge and the health system nears the brink of collapse.

But also for all the terrible things he has done since he became premier.

Ford was never fit to be premier of Ontario. The pandemic didn’t reveal that; it just bathed it in the garish light of emergency. Both before his time in provincial politics and since, he has shown no distinction other than his extraordinary capacity to alienate, divide and fail. And the failures are many and epic.

Getting rid of a premier with a majority government is difficult outside of an election. But Ontarians cannot wait to hold Ford accountable at the ballot box. A caucus revolt might do it. But even without one, for the good of the province and his own party, Ford should catch the next train to political oblivion.

For the Fordzilla is a beast of the lowest order.... 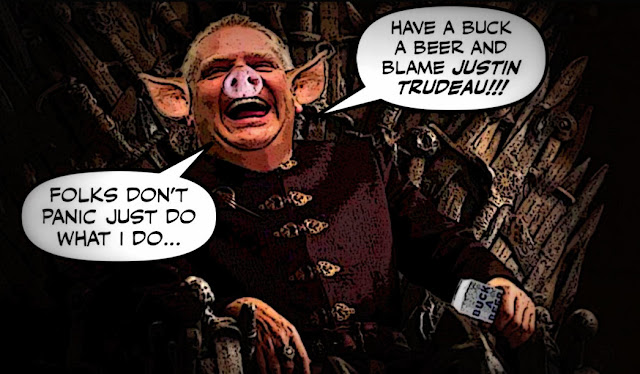 And thousands could die if some way can't be found to remove him from office. 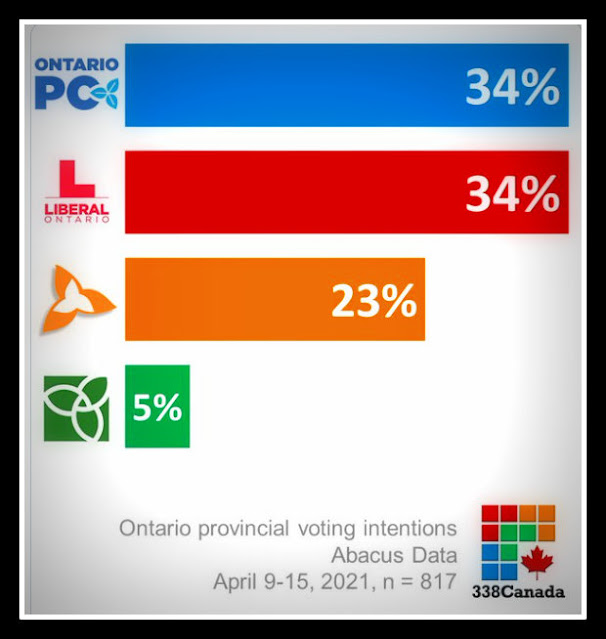 And can only get worse as more people get sick and die.

While Justin Trudeau can only become more popular in Ontario.

Especially since he's just announced that Ford is not going to stop him from helping the province.

Prime Minister Justin Trudeau says he is working with provinces and territories to send more health-care workers to Ontario and boost rapid testing to shepherd Canada's most populous province through a gruelling third wave of the COVID-19 pandemic.

"First, we are mobilizing federal health-care workers from across government departments to deploy to the front lines in Ontario, in specifically the [Greater Toronto Area] where the situation is the most critical," Trudeau said in a video posted to Twitter on Sunday afternoon.

You know, at a time when Ford is burning down his own province, and the opposition parties in Ottawa keep playing dirty political games.

It's good to know that Justin Trudeau is acting like a real leader, is doing his best to save us from this nightmare.

And when the time comes will deserve a huge and well deserved majority... 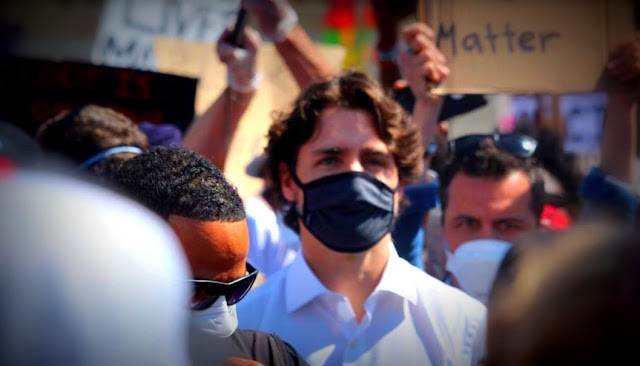 In that communist country known as "the United Kingdom of great Britain and Northern Ireland" you can get £96.35 per week Statutory Sick Pay (SSP) if you’re too ill to work. It’s paid by your employer for up to 28 weeks. That may seem a measly amount, but companies usually offer more generous and competitive schemes.

Compared to the rest of the commonwealth, Canadian employment rights and benefits are absolutely mid-evil. It may be connected to Canada's proximity to the US and the disproportionate influence of that country's various businesses groups, but that's just my view.

Frankly, its doubtful that the the current batch of Republi-Con clowns will improve Ontario's dickensian labor laws. More likely, they will attempt to "Americanize" Canada's healthcare system, similar to what that Jason Kenney fellow unsuccessfully tried in Alberta.

Man oh man, those American hacks like Jake Crapper who did a quick and easy hit job on Trudeau because U.S. audiences wouldn't recognize the dope dealer brother of the dead crackhead, must have CORVID-19 from all the crow they're having to eat. Dr. Warner actually went on CNN and schooled Paula Newton. Another Ontario ICU doc went on Al Jazeera. Now Moscrop's op-ed was number one for hours on the trending list at the Washington Post. The tide is definitely turning. Once again, Ontario is an international embarrassment thanks to the other half of the Dudley Do-Wrong duo. Have you driven a Ford lately? This one needs a recall, like a Pinto that's unsafe at any speed!

No one is defending DoFo the Clown anymore besides Lilley (for obvious reasons) and Kinsella (for his own obvious reasons). And even they're running out of steam. After attempting to sow a wedge in the Liberals' solidarity by running an astroturf "Chrystia for PM" website last election, Wornout is attacking her about the budget. It's game over for Druggie the Dotard and they know it. Trudeau is giving an interview to Ryan Jespersen tomorrow. That can only mean one thing: Kudatah Kenney is next. Followed by Dumbfuck O'Toole.

Something's going on whereby the tentacles of the IDU are reaching out to media friendlies across the border and across the pond to attack Trudeau while "The Resistance" fails and flails, but thankfully, Canadians aren't buying it. A counter-resistance is mounting against that, even if Jake the Flake (who's been very quiet lately) wants to call fact-checkers TruAnons like they're part of some cult. If that's how he conceives of ICU doctors, schoolteachers, and warehouse laborers, then he might as well just decamp over to Fux News. He and Tucker can compete for Marjorie Taylor Rempelthinskin's affections next time she goes on to spew her Trudeau-derangement BS.

The fact is, Doug needs to resign and call an election because the rest of the party is no better. And as for that infamous cover (for which I've replaced irrelevant Scheer with his replacement, Elmer FUD)... um, nice to see Paul Wells finally coming around to reality, as he did on P&P the other night, but when will he issue a public apology? Or Jen Gerson, who said "Relax, Doug Ford will be fine"? JAQoff Jake is part Canadian too -- why won't any of them do the right thing, the national pastime, and say SORRY?

Generally speaking it is rare for a sitting PM or Premier to resign. So I believe those asking for his resignation will probably be disappointed.

"Send in the clowns...the Ford Murderclowns...they're already here" https://www.youtube.com/watch?v=SzLHU6S4oic
What's happening in Ontario is a Dougsaster with hopefully a Fordgone conclusion to come. Maybe it's time that JT enacted the war time measures act and performed a coup d'état on dithering Doug. It would not only allow competent people to take the reins, Dougy's head would probably explode from the rage of being benched. Good. He's pretty much useless except for embarrassing a province and country with his ying yang political blame game while exhausted health care workers bear the brunt of his ineptitude. I would be remiss for not pointing the finger at the covidiots who are enabling the spread of the deadly variants, however, when uncle Dougy does little to shut these idiots down he may as well be condoning it like this now suspended police officer is.
https://twitter.com/ConsumerSOS/status/1383087820722552833
This is from the US but I swear she must be related to covidiot #1 above.
https://www.youtube.com/watch?v=ycUDUpIKvcw
Another oddity is Dougy crying for more vaccines while opening up the AZ one for forty and older citizens. I'm guessing our hoarding premier's AZ stock's expiry date is quickly approaching. It's chilling to think of how many vaccines will have been wasted by the Ford circus once everything is said and done. And much will need to be said and done to hold the Ford regime accountable for this disaster.
JD

Hi BX...I agree with you, Canadian rights and benefits are as you say mid-evil. It's the old idea that helping people will make them lazy. In normal times that's callous and inhuman, in pandemic times it's murderous. I've been trying to help a senior in my neighbourhood get the benefits that she has a right to get, and I can't believe how cheap the system can be. We can and should be so much better...

Hi Jackie...As I said in my post, the screeches of the toxic Trudeau haters like Kinsella, Lilley, Coyne, the Disaffected Liberace, etc etc both disgust me, and make me laugh. They're clearly desperate, our Canada is getting its act together, and I look forward to them spontaneously combusting. I've never seen a budget so well constructed that the usual suspects can't attack it without looking callous or simply idiotic. After so much nonsense I feel the tide is turning at last. The Con era is ending, and although we'll still have to stick a stake through its black heart, I can't help feeling that at last we're coming out of the darkness and into the light...
P.S. I watched the Chauvin verdict on CNN today, and I couldn't believe how rude the yapper Tapper was to the poor Don Lemon. He obviously hates the publicity Lemon has been getting with his new book, and with CNN's ratings plunging in the post Trump era, I think the Yapper Tapper is just about ready to be fitted for a straitjacket...

Hi Ottlib...I realize that hoping that Ford will resign is wishful thinking, but there could be a caucus revolt, and everyone should be calling for Ford to resign because his murderous incompetence is threatening all of us...

Hi JD....Like many people in Ontario I also wish the Trudeau could declare an emergency and have Ford placed under house arrest in his Muskoka cottage, or a maximum security mental hospital. But unfortunately it can't be done. Jagmeet Singh keeps demanding it but he'll say anything to be noticed, and needs to be reminded that this is Canada not Khalistan. But the good news is that the Fordzilla is finally working for the people, the more people he kills, the more the revolt against the Cons from Ontario to Alberta will be strengthened. Maybe I'm just suffering from pandemic fever, but I really think the Cons are running out of history, and that better times are ahead...