Erin O'Toole and the Horror of the Ghastly Gallant 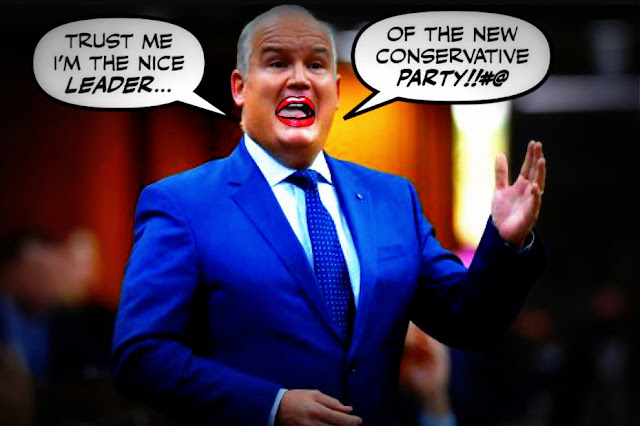 As I'm sure you all know by now, Erin O'Toole is desperately trying to fool Canadians into believing that he's really a nice guy.

And that because he expelled the SoCon bigot Derek Sloan, and demoted the yappy Pierre Poilievre, his ugly party is now a more moderate one.

But as I warned, you can't put lipstick on a hog or a Con.

And the more you put on, the worse it looks... 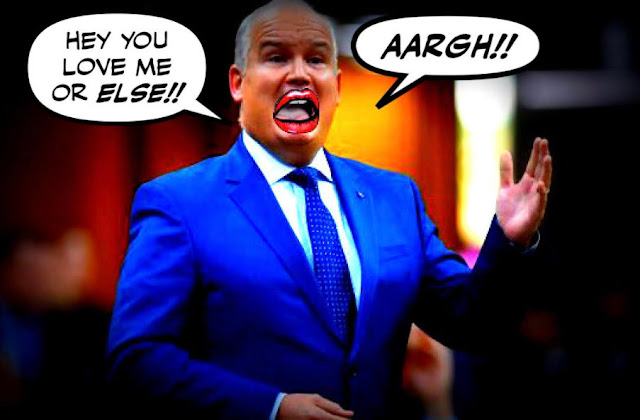 So it's all going horribly wrong.

In a recent article Paul Wells claims that O'Toole's goal is to be blandly reassuring.

O’Toole’s goal is to be blandly reassuring. He’s only got the one citizenship, thanks, and he was riding around in helicopters doing useful things when Trudeau was forcing people at parties to decide how to react to him. If a change of leaders were all it took to finish off the Liberals, O’Toole might be the person to do it. But there is no reason to believe a change of leaders is all it takes.

But also points out that while O'Toole's transformation is astounding... 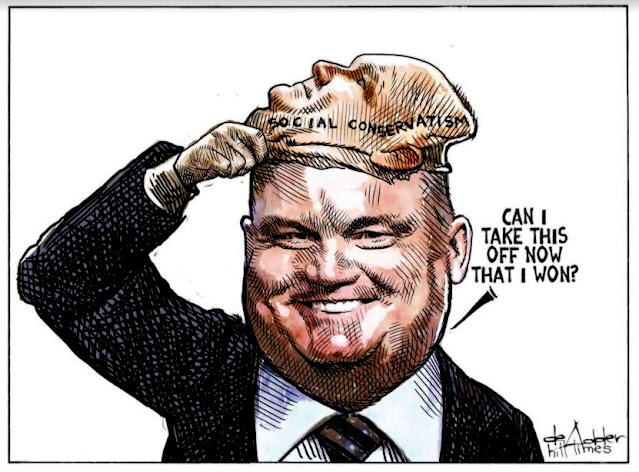 Honestly, the difference between the personality O’Toole presented to Conservative members in the leadership race and the personality he’s presenting to Canadians as a federal election approaches is spectacular. He was the True Blue candidate who’d Take Canada Back. When Peter MacKay tried to get social-conservative gadfly Derek Sloan kicked out of the Conservative caucus, O’Toole blocked the effort and ran online ads to brag about it. Months later, as leader, he led the successful effort to get Sloan thrown out.

Trying to slather lipstick all over his ugly party will be considerably more challenging.

In some ways this is classic leadership politics: play to the activist base to win the leadership, then pivot to the centre. One problem is that absolutely everyone sees you doing it. A bigger problem may be that the True Blue Take Canada Back party O’Toole won is still there.

And it's not hard to see why.

For yesterday, there was Pierre Poilievre holding forth in the House of Commons, demanding to know whether Justin Trudeau's plan was to "lock us down forever." 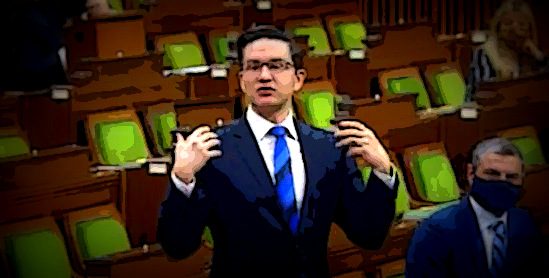 Flapping his hands around like a seal, or a mini Fuhrer.

And looking and sounding like the same old right-wing extremist who would put the interests of big business before the lives of Canadians.

While Andrew Scheer was also wandering around like a zombie, and attacking Trudeau again, as he did every day for years... 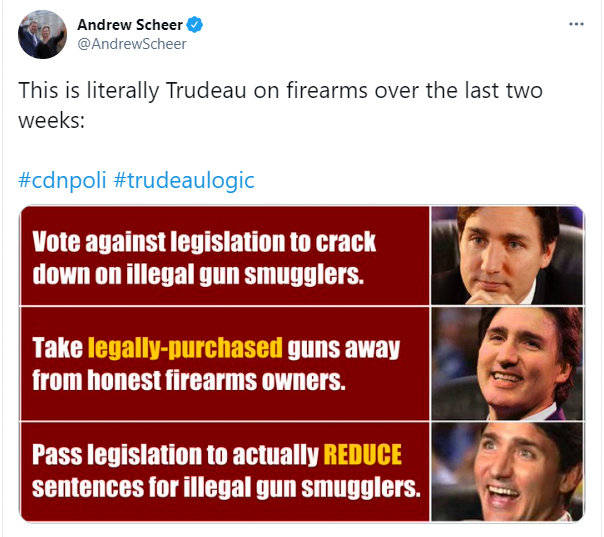 No doubt to try to impress O'Toole who pandered to the gun lobby to win the Con leadership... 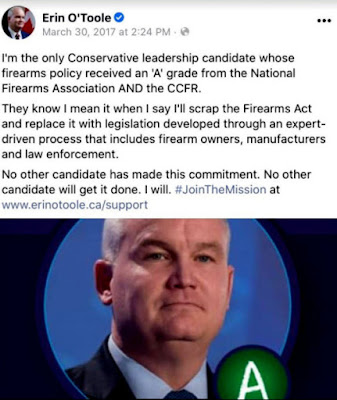 And who would if he could, turn Canada into a bloody copy of ugly Amerika.

While his shadow health critic Michelle Rempel, who also loves guns, is apparently drinking on the job.

In the middle of a pandemic.
And then, as if that wasn't bad enough, there was Cheryl Gallant, peddling deranged conspiracy theories.

They've pounced on video of a virtual meeting eastern Ontario MP Cheryl Gallant held earlier this month with a group of young Conservatives at Queen's University in Kingston.

In the video, Gallant says Liberals have become "radicals" who want "all illicit drugs to be legal" and "to normalize sexual activity with children."

While the cowardly O'Toole ran for cover.

Conservative Leader Erin O'Toole, who has been attempting to put a more moderate face on his party, says the Liberals are trying to distract from their failure to deliver COVID-19 vaccines.

"Canadians have other priorities and so do I," he said in a brief statement late Friday.

You know, a few years ago I wrote a post about the ghastly Gallant, after she disgraced herself by turning a memorial for a murdered soldier into a fundraising opportunity.

And I am still haunted by nightmares of her and those glistening Easter hams... 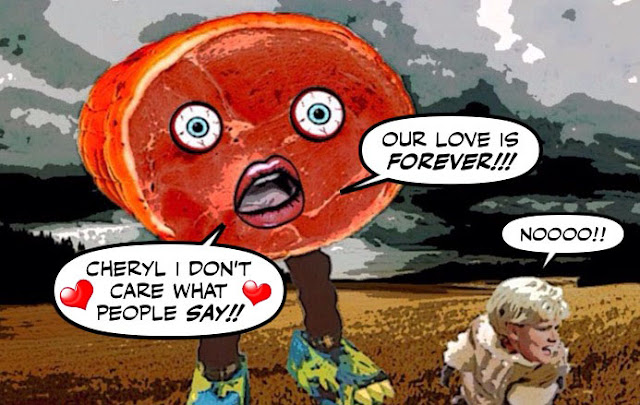 But this is not just crazed it's evil...

Another member of Erin O'Toole's team is promoting deranged conspiracy theories. MP Cheryl Gallant has insisted that Liberals want to “normalize sexual activity with children”. These are disgusting & dangerous lies! This fear mongering poses a threat to our democracy. 1/3 pic.twitter.com/vKCcPunwDu

Gallant has always been a religious fanatic, a racist, an anti-Muslim bigot, and a kooky homophobe.

But now she's peddling Q-Anon conspiracy theories at a time when the threat of right-wing extremist violence is hanging over us all.

And that should be the limit.

The Cons are not a moderate Canadian party. They are the Trump Party North.

O'Toole isn't who he is pretending to be, he's just another shabby Con artist.

Every time a floater surfaces we shouldn't assume it's unique. Their party is a sewage system.
This
is
who
they
ARE.#cdnpoli #CherylGallant pic.twitter.com/p4rrJJLMxc

And if he's too cowardly to fire Cheryl Gallant.

He should have the decency to fire HIMSELF...

The colossal embarrassment of the upper Ottawa valley rears her ugly head once again and what does the "moderate" tool have to say about it? "Oh the Liberals are just trying to deflect from their vaccine failures". Just like his head, he's a shining example of a failed leader. He doesn't address the obvious and he repeats the big lie about vaccines. Erin O'trump defending Marjorie Taylor Gallant it would seem. I'm guessing that as he attempted to poison young conservative minds with his Ryerson vocal vomit, he's impressed by the puke she spewed on the Queens students. The coming days should be interesting as I expect the media will report but not comment or condemn her deranged rant so it's important that we spread this story along with her sordid history of homophobic, bigoted and conspiracy laced rants. She is the conservative party and IMO, much worse than Derek Sloane ever was. Have fun with that, tool.
Another example of the tool's failed leadership is allowing an obvious alcoholic to continue on as an MP. She needs help, Erin!!! Send her to rehab or was that grape juice in her wine glass? I'm sure they were grapes at one time but given her history of boozy outbursts, it's clear that Michelle has a serious drinking problem. Don't wait until she wraps her car around a tree or God forbid, kills someone. Do it now! And while you're at it, find a good shrink for Cheryl. She's finally gone off the deep end.
JD

The True Blue plastered in lipstick is a scary sight. Not quite corporate enough for his oil, guns and tax shelter legacy supporters and definitely not charismatic enough for those wanting to wage spiritual war on the satanic liberals. As Trump discovered this bridging strategy has a best before date after which it is necessary to choose sides. He chose the prophetic tongue speaking spiritual warfare side. The Tool seems to have chosen the legacy business side likely with a promise that the evangelical side will be rewarded many times over when he gains power. The continued evolution of the charismatic movement in the US which is slowly spilling over into Canada is much scarier than the Fools lipstick and will eventually consume him if it continues to gain momentum.

If you get backlash from people in the coming years, its because you think OToole is a Fascist. Thats not even a thing and you know it in your heart but you peddle that garbage anyway. Its a way for communists to attack any who differs in opion from them. You're not fooling anyone. All I'm seeing from you is hatred and negativity, what are you offering to help the world besides the lamest excuse of 'helping fight fascism in Canada' ? Are you okay?

Lets assume that the Tool is not a fascist and embark on a mini exploratory trip to determine exactly what the CPC is all about. First stop is their official website where one would expect to see a detailed policy platform on how they are going to help Canadians. No such luck its all about fundraising, guns, oil, communism bad and Trudeau failed. Not a word on things that matter such as both social and physical infrastructure, science and technology programs etc. The simple reason is that they represent downward trending legacy issues such as oil, armaments, tax shelters for high income personnel and restoring religious influence in governmental policy. Nothing the majority of Canadians support so its all about somehow lying their way into power and then somehow remaining there. That's where the fascist playbook or something similar comes in as the majority of Canadians simply do not support bringing the legacy issues back into the forefront. Times have changed and dwelling on the past at the expense of the future is not an option supported by free choice.

Hi JD....Yes, Gallant has always been a bigot, and a classless Con if ever there was one, But I think you’re right, she looked looped on something. Or maybe it’s the early signs of dementia. None of which would excuse her deplorable behaviour. For what I forgot to say is that in the times we are living through her deranged claim that Justin Trudeau was responsible for spreading a deadly virus could encourage other crazies to try to hurt or kill him.I am not optimistic that our shabby Con media will give this outrage the attention it deserves, so we are going to have to do it ourselves....

Hi Steve....,I will never forget how Trump insulted Cruz’s mother, and claimed that his father had something to do with the Kennedy assassination. But despite that Cruz not only forgave him, but sucked up to him in a disgraceful manner. He is clearly a man without honour or decency...

Hi RT....I am glad you like O”Toole’s shiny lipstick lips. I am rather pleased with them myself. So pleased that I just downloaded a whole new set of lips even bigger and more garish that the ones I have now. 😎 But as for O’Toole himself, his attempt to appeal to everyone is making me dizzy. I can’t believe he thinks he can get away with this outrageous charade, so I’m reassured that even the very Con friendly Angus Reid has O’Toole’s disapproval ratings climbing like a rocket....

Hi anon@10:35 AM....First of all I have been getting backlash from Cons for over ten years, and if I didn’t I would be worried that I was failing to do my duty. Secondly, I don’t necessarily believe that O’Toole is a fascist. What I believe is that he is a grubby opportunist who panders to religious bigots and far right extremists and that makes him dangerous. I am also not a communist, and not mentally ill. But Judging from your deranged comment I have to tell you I can’t be sure that you are not losing your marbles. Stay strong and be good...