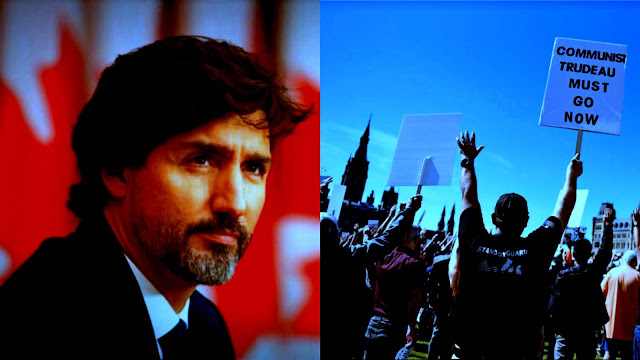 As if Justin Trudeau didn't have enough challenges battling a pandemic, now he's preparing to take on another kind of enemy, an old enemy.

But predictably the gun nuts are very unhappy. So unhappy the president of the National Firearms Association is making jokes about bringing back the guillotine to deal with the "tyranny" of gun control.

Which at a tense time like this one isn't just NOT funny. 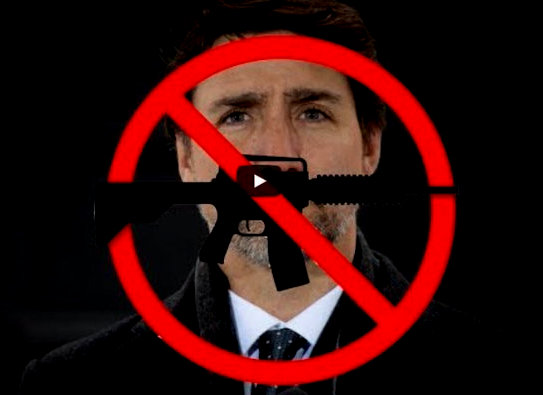 In the video recorded during the NFATalks podcast on Wednesday, NFA president Sheldon Clare can be heard discussing a call he shared with an unnamed person who he said “suggested that we needed to revisit our old woodworking and metalworking skills and construct guillotines again.”

“And that that would really be the best kind of committee of public safety, to get that re-established,” Clare said. “They want to make it about public safety… that’s what this person told me.”

Canadians “know tyranny when they see it,” he said. “And this, my friends, is tyranny.”

So now the NFA is going to have to explain itself.

A House of Commons committee will be asked Monday to censure the National Firearms Association (NFA) over comments the association’s president made in a recent conference call, Global News has learned.

And so will Erin O'Toole... 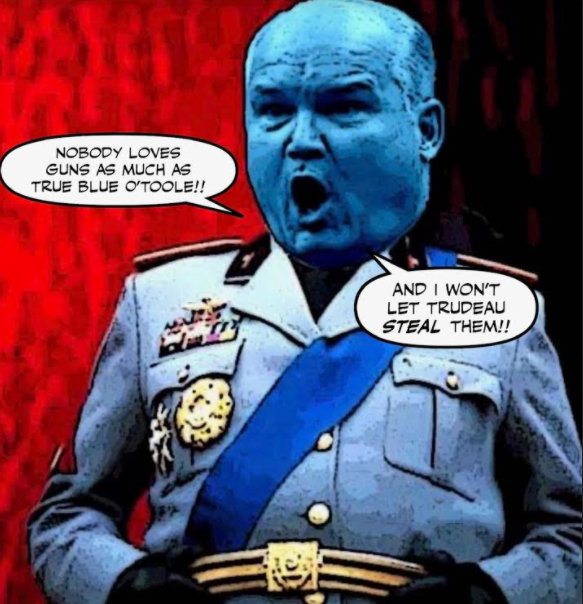 Who will have to explain why when he was posing as True Blue O'Toole, and running for the Con leadership, he boasted about his passionate love for the National Firearms Association. 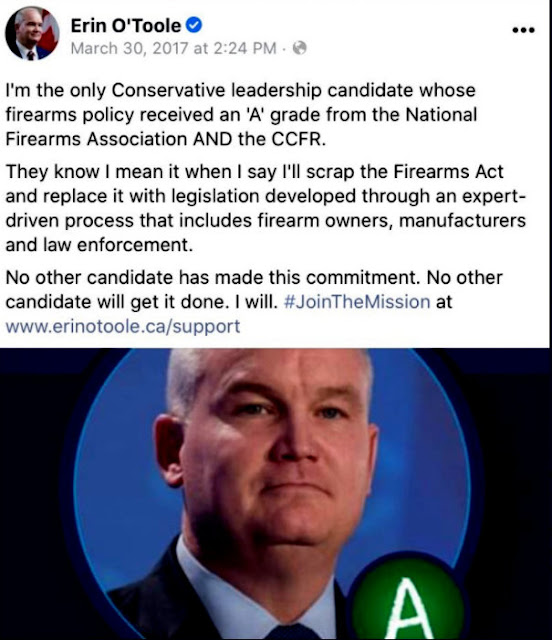 And who must now tell us whether he is prepared to denounce those ugly guillotine comments, or give the NFA another big hug.

Which if he does could be very embarrassing, especially after his failure to rein in the right-wing nutbar Cheryl Gallant... 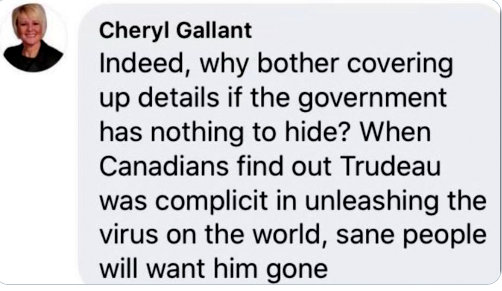 Who like the gun lobby is also inciting crazies to go after the decent Trudeau.

And will make it even more difficult for O'Toole to fool Canadians into believing that the Cons are now a moderate party.

And not the Trump Party North... 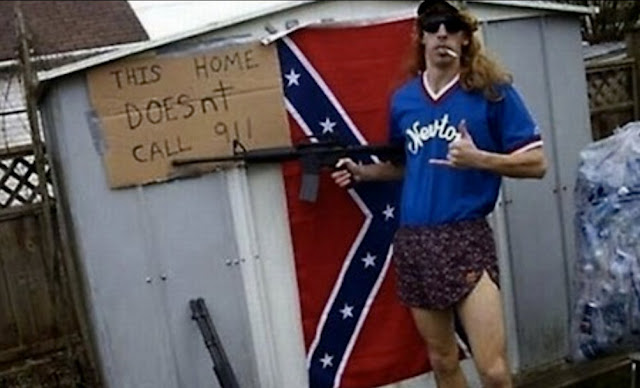 No matter how much lipstick True Blue puts on... 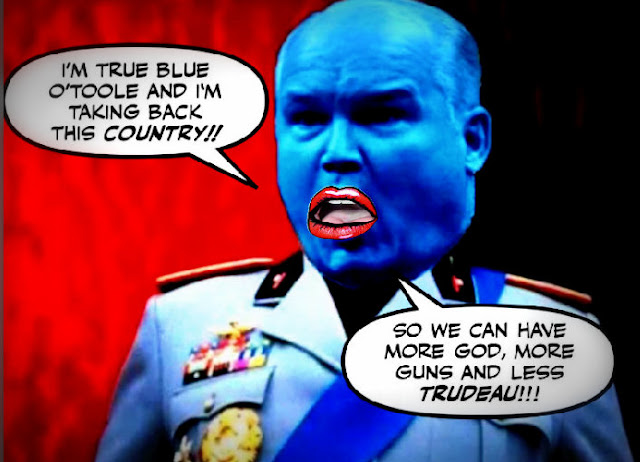 You know, some in our shabby Con media have tried to help O'Toole portray his party as more moderate.

But the ugly truth is slowly being revealed, and can no longer be denied.

The Cons are now too American, too kooky, and too dangerous, to ever govern this country again.

And in the next election we will use all of that to destroy them...

Bill C-21 is being decried by gun control groups as a betrayal to them.

Justin Trudeau is realizing to many vaccines on the market at one time. This is not a good idea, he should delay supply and drive demand up.

NO ONE IN A CIVILZED SOCIEYT NEEDS TO OWN A GUN. IF YOU GOTTA KILL SOME DUMB BEAST YOU SHOULD HAVE TO RENT

Sure people need to own a firearm and millions upon millions of Canadians do.

Hi anon@522 PM...Yes you’re right. And I understand why gun control groups are upset. The problem is that in Australia the government legislated a mandatory buy back of certain weapons, while the Liberal plan makes that buy back voluntary. I am not informed enough to tell you why we chose to go down that path, when the mandatory buy back in Australia was such a huge success. So I can only blame Canada. That’s who we sometimes are. But it’s not a betrayal, it’s a step in the right direction, and hopefully we’ll get there one day...

Hi Steve...I’m just glad the ramping up of our vaccine supply has shut the Cons up, and stopped them from cheering for Canada to fail. As for guns, I’ve seen close up what guns can do to people, murders, suicides etc, so while I don’t want to see guns abolished, I do want to see them strictly controlled as they are in the UK...

We won’t. Justin got cold feet and now the gun control groups will denounce him and encourage their supporters to shift their votes away from the Liberals.

Wonderful if you ask me.

Hi anon @10:53... Dream on. Who are the gun control groups going to shift their votes to? The Cons? The NDP? Have you seen the latest polls? If you do make sure you are sitting down. My prediction: when an election is called the Trudeau Liberals will win another majority. Sorry....

The NDP. Trudeau betrayed the gun control movement and he has betrayed Quebec. He broke yet another promise. As a gun control supporter I am done with him.

Conservative politicians who pander to the school shooter lobby tread a fine line. On the one hand they wish to throw enough red meat to the rabid animals to get their votes, but on the other hand a majority of Canadians dread the prospect of American style school shootings. I remember Harper's contemptable comments on gun ownership, really a dog whistle to "vigilantism", going so far to suggest “all the other parties are anti-gun”. But being the cynical swine that he was Harper clarified by saying “But neither has anyone in this country … ever proposed that we would go to an American system”. He had to throw in the “American system” line in there knowing full well how his words would be viewed by a majority of sane Canadians. Hence, the flip flop by Harper and is current acolyte O’toole.

Nevertheless, this is a dangerous strategy as the Bissonnette(s), Lépine and Corey Hurron’s of this world, will view acknowledgment of weapon ownership as a vindication of their deranged political ideas and turn those very same weapons gifted to them by conservative politicians on minorities, women and left-wingers. That has always been at the heart of the so-called gun debate, the freedom to use firearms to kill, maim and threaten against one’s perceived political enemies.

Wonderful to see the School Shooter Lobby throw a hissy fit when the subject of sensible gun control is discussed. Of course, Canadians who feel strongly about gun ownership can immigrate to the United States, where citizen’s have the “freedom” to enjoy gun massacres in schools and other public spaces.

The blue Tool would like everyone to believe that gun crimes are only perpetrated by the criminal elements in our society and stiffer laws, bigger jails and police with bigger guns would solve the problem. Like all things Tool its another lie, all we have to do is look below the border to see the magnitude of the lie with 6 times the gun related murder rate on a population adjusted basis.
On an annual basis Canada experiences approximately 650 homicides of which approximately 40% are gun related. Of those approximately 40% are perpetrated by family members or the consequence of an intimate relationship gone wrong, another 30% are acquaintances which leaves the balance for strangers and criminals. The bottom line is murder is most often committed by someone the victim knows and not random criminal activity. When non lethal firearm incidents are considered the numbers quickly escalate and become a lot murkier but the serious incidents likely follow the homicide proportions related to family, acquaintances and strangers.

Handguns are the weapons of choice in gun related homicides so why have the Liberals targeted assault weapons? My impression is that assault weapons are symbols of power and control to one group and rejected by groups of potential victims for the same reason. Given their history of extreme violence especially those instances against women the Liberals choose a good place to start but handguns are a much more relevant and complex problem.

Hi anon @5:11 PM....You aren't the same anon who left an earlier comment are you? Because you sound so similar and equally ridiculous. Justin Trudeau hasn't betrayed anyone, he his just upholding our Canadian values. And that's why he is the country's most popular politician, and heavily favoured to win the next election. Sorry...

Hi BX...Good comment. The media has downplayed it, or ignored it, but the Rideau gunman told police that one of the reasons he did what he did was because of Trudeau's plans to strengthen our gun laws. So they are definitely capable of being dangerous. Also, the UK brought in tough gun controls after a horrifying massacre of young children at a school in Scotland. And in Australia, another savage massacre led to their gun control laws, which by the way, most Australians still support, and in fact like to boast about. Reasonable gun control should be supported by everyone. Let's hope it doesn't take something monstrous, to get more Canadians to understand what should've been obvious...

Hi RT...The assault rifle ban makes just a little harder to wipe out a shopping centre, but you're right, the use of weapons in murderous domestic disputes as well as suicides are not given enough weight in the Great Guns Debate. Even though they make it so much easier to kill your spouse or kill yourself. I may have mentioned this before, but when I was a boy I used to beg my father to buy a gun. We NEED one I wailed, it's not a luxury, it's a necessity!!#@!!! But he was right, and I am grateful....

its possible the Liberals did not confiscate assault weapons as it would not stand up to a supreme court challenge which in turn would negate the whole bill. Difficult to argue its necessary to seize legally acquired property considering the extremely low homicide rate and given the fact other guns with much higher homicide rates are not included. Falling into the trap the government can make into law whatever legislation it wants is pure Con (NDP?) thinking. Lets not forget we cheered when the supreme court rejected most of Harper's legislation. Be thankful the Liberals are smarter than that and chose to eliminate the legally acquired residuals through attrition.

Establish a non-permissive storage possession regime that would offer lawful owners of firearms (and variants) prohibited on May 1, 2020 the option to keep their firearm; however possession would be subject to strict conditions including no permitted use, no import, no further acquisition, no sale and no bequeathal.
Owners who choose to retain these firearms would be required to comply with additional requirements including successfully completing the related Canadian Restricted Firearm Safety Course and upgrading to a Restricted Possession and Acquisition Licence (with all associated course and licence fees), registering the firearm(s) with the Firearms Registrar, complying with enhanced storage requirements, and periodically providing information on storage of the firearm(s) to ensure compliance.

PS. Simon, I just remembered comments made by Harper's Public Safety Minister Steven Blaney, who said "To possess a firearm is a right, and it’s a right that comes with responsibilities"

Source for the comments:
https://www.terracestandard.com/opinion/is-firearms-possession-a-right-in-canada/amp/

Blaney had to walk back his comments. It just goes to show that Reform Republicans have always dreamed of remaking Canada's gun rights in the US's image. it is not a mere coincidence that the school shooter lobby used violent language similar to the NRA down south.

Sane Canadians must remain vigilant, lest gun massacre's become a regular event like the US.

In Quebec it is seen as a betrayal and a sop to the gun lobby. He will be campaign against in the next election.

Well as Justin has proven, the party is nothing but dishonest. Here in Quebec there is a feeling of betrayal, Ottawa has let us down again allowing these people killing guns to remain.

Hi anon@ 5:53 PM...You seem to forget that I'm from Quebec, where the Liberal lead over all the other parties is not shrinking its widening....