Is Jagmeet Singh Trying To Destroy The NDP?

I still remember how happy I was when Jagmeet Singh became the leader of the NDP.

I thought it was great that a member of a visible minority had finally been elected leader of a federal party.

And I hoped that Singh could get the NDP out of the right-wing rut it had been in under Tom Mulcair.

But boy was I wrong. 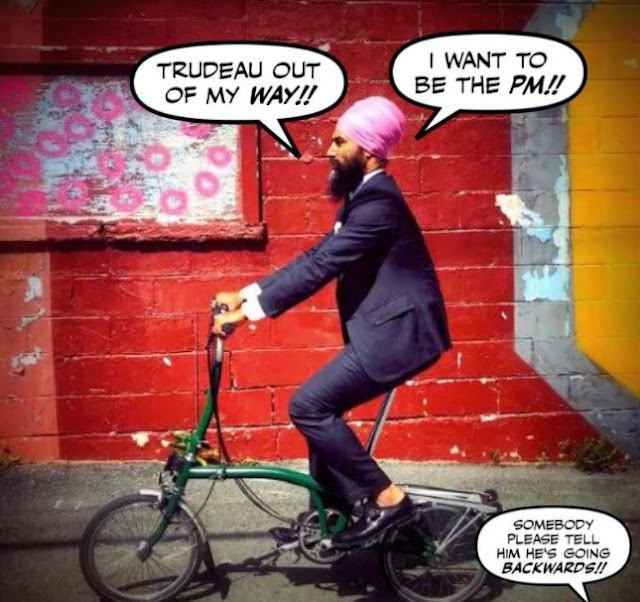 Singh is turning out to be an absolute disaster, and is leading the NDP off a cliff.

He has almost no original ideas, but instead steals the ideas of others. He is incredibly ignorant about the way this country works, he lies all the time, and he smears Justin Trudeau over and over again just like a Con.

But this is the absolute limit....

Can you believe that? Is that childish or what?

And needless to say the reaction on Twitter was brutal...

And I particularly liked this tweet from Andrew Fawcett...

Because it's so true.

But while I can understand the anger and the disappointment, I don't know why anyone should be surprised.

When Singh has always been a millionaire, a dilettante, a narcissist, and a shallow showman. 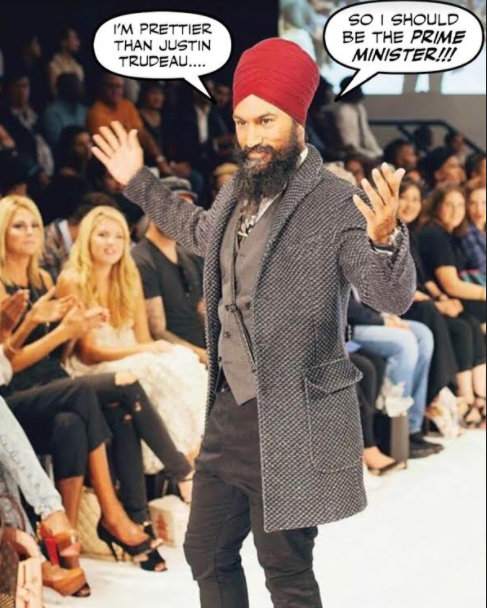 Jagmeet has a taste for dandy luxuries that don’t comport with the monkish minimalism of his party. He wears bespoke suits in the slim British style—his favourite is a brown tweed with cobalt-blue stripes, designed by a tailor in New Delhi, which he often pairs with a millennial-pink turban. He owns two Rolex watches, an Oyster Perpetual Datejust and a ­Submariner (both were gifts); a crimson BMW coupe; and six designer bicycles.

Who was, is, and will always be, in it for HIMSELF.

His crude attempt to sabotage the first meeting between Justin Trudeau and Joe Biden is just a reflection of how envious he is to see two real leaders in action... 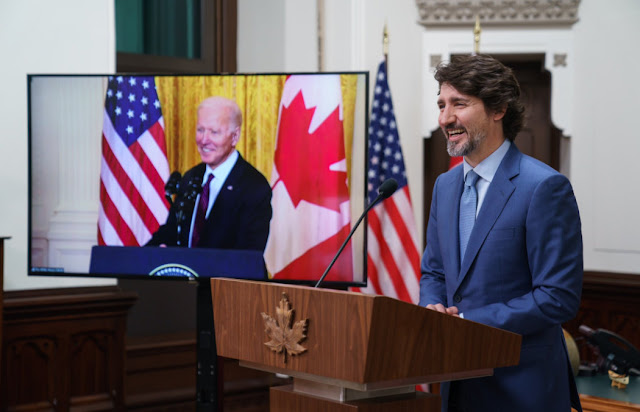 And know that he will NEVER play in that league.

So he should stop trying to violate the constitution as he did again yesterday,

Jagmeet Singh rose for the NDP, and in French, demanded support for this party’s (unconstitutional) pharmaceutical bill, for which Trudeau stated that they support pharmacare, but they would not support the NDP’s plan to impose a top-down solution in favour of negotiating with provinces. Singh switched to English to claim that his bill was according to the Hoskins Report (it’s not), and Trudeau listed the actions his government took to lower drug prices, and stated that because they respect the constitution, they are negotiating with provinces.

For crass political purposes, in the manner of a Con artist.

And if he's too lazy to learn the way our federal system works, he should stick to his childish Tik Tok games...

I’m not putting @theJagmeetSingh on blast or anything but I kind of wish he hadn’t made this TikTok today. It definitely didn’t make me feel good to see such a stressful situation for First Nations people being made light of, and not this way.

And of course, resign as soon as possible.

Before he takes the NDP down with him...

I meet Jagmeet once, this was when he was a newly elected MPP in Ontario. He was an unknown quantity at Queens Park and there wasn’t anything special about him besides the fact that he rode his bicycle to work.

Stewing under Horwath, Jagmeet saw an opportunity for the promotion he thought he was owed and threw his hat into Federal politics. Stephen Lewis had just shivved Mulcair at the NDP’s party meeting and his daughter in law’s “leap manifesto” was Stephen’s warning to his family’s long time rival Notely to stay away from Federal politics.
So, the stars aligned and the NDP naïvely selected Jagmeet as party leader. Come election time, Jagmeet’s short comings were laid bare for all to see: seats lost in Quebec and the rest of Canada, the NDP back to third-place.

But the NDP have never been politically savvy nor do they care for the ruff and tumble of politics. They rarely do any form of effective fund raising and rarely go door to door. For all their pompous declarations, the NDP remains comfortable exactly where they are, in political no-mans land with no power and no real way to bring positive change to Canada, hence the juvenile tweeter posts.

Given Jag’s lack of experience, I doubt he does anything without the approval of Lewis senior, his son and Naomi Klein. Jagmeet’s political future is not promising.
BUT HEY did you see Jag playing “Among Us” with AOC!!!!

He has my vote.

Nice bike but I am less than impressed by a lawyer and the leader of a national political party whose knowledge of the Canadian constitutional framework appears to be about the same as my cat's.

Here is a couple of sources for those of you interested in the NDP's non-existent political future:

First, some history on the rivalry between the Lewis and Notley clans.

Second, how Jag's political naivety will hamper the NDP's nationally.

The NDP much like the CPC is divided by regional and ideological differences. They are unlikely to transform their sanctimonious pronouncements into consequential policies. As for Jagmeet, he is just there for the ride. But for his public persona, he would have been toiling away as an underpaid criminal defense lawyer at old city hall. Why should Jag actually help the poor wretches of society when he can meet VIP's as a politician? Besides, Legal Aid Ontario doesn't pay nearly enough to buy Rolex watches or designer bicycles.

This all started with Jack Layton. He changed the focus of the NDP from being the conscience of Canadian politics to a party that would seek power at any cost. The problem is he managed to take the NDP to Official Party status and that created a sense of entitlement and great expectations in many NDP quarters. They began to believe it was "their turn" to govern since they were "the government in waiting". Of course politics does not work that way so when the Liberals leapt over them to win in 2015 they became extremely resentful of the Liberals in general and Justin Trudeau in particular.

As well, Jack Layton only managed to achieve Official Party status by tag teaming the Liberals with the Conservatives.

Their hatred towards Justin Trudeau for denying them what they believed should have been theirs combined with the knowledge that their only hope of gaining power is to bring down the Liberal, even if it risks another Conservative government, is what is motivating them now. And it has completely destroyed any sense of perspective they might have had.

Mr. Singh is not trying to destroy the NDP. He like many NDP supporters have a major misconception of the significance of Jack Layton's achievement in 2011 and he is making decisions based on that misconception.

Hi BX...I'm sure if I ever met Jagmeet I would like him, because he seems like a nice guy. But he is a terrible politician who with every passing day is becoming less principled and more dishonest. And this pharmacare scam is simply outrageous. If he doesn't know how Canada's federal system works he's too ignorant to be a political leader. If he does know and doesn't care, then he's acting like a Con artist and should hang his head in shame. After the Trump and Scheer/O'Toole years where lying became normalized the very last thing we need is a compulsive progressive liar. And thank you for those links. I hope Singh doesn't foul up Notley's chances of getting rid of Kenney, for that would be unforgivable....

Hi jrkrideau....Funnily enough one of his fancy bikes was just stolen. Like Charlie the tuna them thieves have good taste. But seriously, Singh's ignorance of the way this country works is appalling. I realize our system can be quite annoying with oafs like Doug Ford running things, but it's better than having a king who doesn't believe in compromising, which is after all what made us who we are...

Hi anon@9:08 PM....You sound like a Con who is hoping that Jagmeet will split the vote and allow the fool O'Toole to rule. Dream on, that too will not happen...