Can We Now Call Him Outhouse O'Toole? 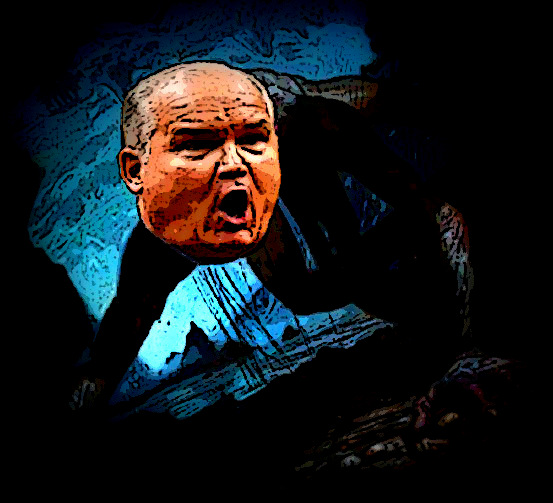 Erin O'Toole has only been Con leader for six months, but already he's crawling through the gutter, and drowning in his own excrement.

He lies all the time, just like Andrew Scheer did before him.

And his hatred for Justin Trudeau is so toxic he refuses to condemn those who would encourage the sickos of this world to kill him. 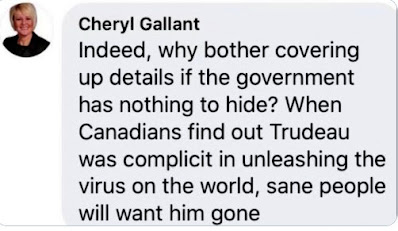 For let's be absolutely clear, refusing to fire, or even publicly criticize Cheryl Gallant for those diseased words, is both cowardly and dangerous.

And allowing four of his Cons to abstain in the face of equally murderous comments is just as cowardly and disgraceful.

MPs on the House of Commons Standing Committee on Public Safety and Security voted Monday to condemn comments made last week by the president of the National Firearms Association, a rare rebuke by a parliamentary committee endorsed by all parties save the Conservatives, whose members on the committee abstained.

Even though the idea of using guillotines to deal with the "tyranny" of  gun control is awfully familiar.... 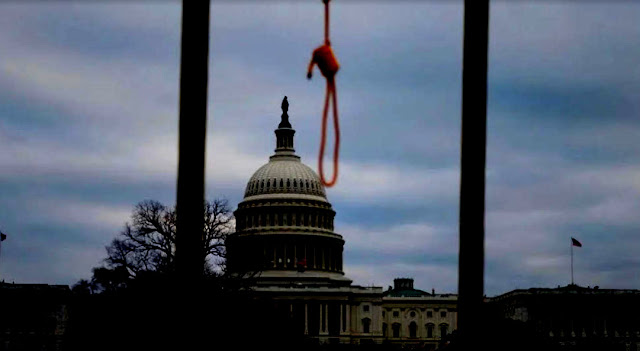 And doesn't belong in Canada.
But if you want to know how much O'Toole hates Trudeau, and how low he is prepared to go, all you have do is watch this video...

For it has to be the most disgusting video ever made by a federal leader in this country.

And it alone should disqualify Outhouse O'Toole from ever being the leader of ANYTHING in Canada.

But what makes it even worse, is that it was made a few days before a deranged gunman crashed his truck into the gates of Rideau Hall and set out to hurt or kill Trudeau. 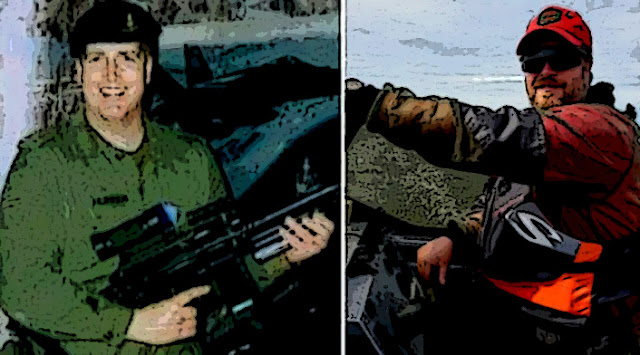 Which could have so easily ended in tragedy,

And was no doubt at least partially inspired by all the hatred O'Toole and his Cons direct at our prime minister, which verges on the homicidal.

But then who can be surprised that O'Toole could be so toxic and so vulgar?

When it's in his political genes... 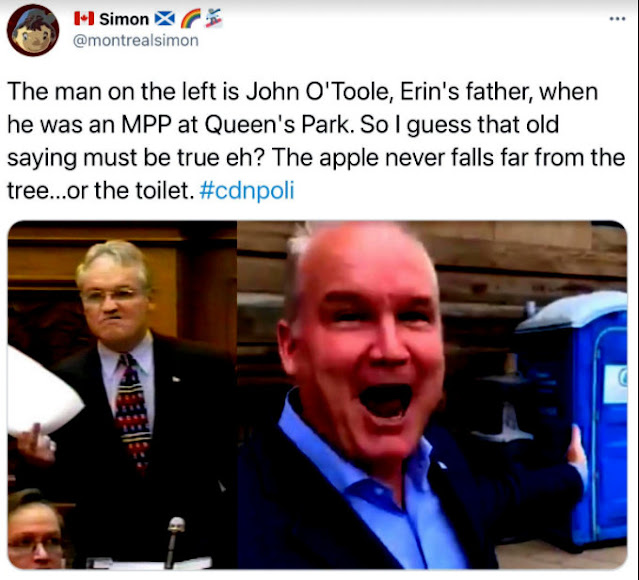 Erin O'Toole and his Cons are trying to take our Canada to a very bad place.

Even as they pretend they are now a kinder, gentler, more moderate party.

But they can't put lipstick on this ugliness.... 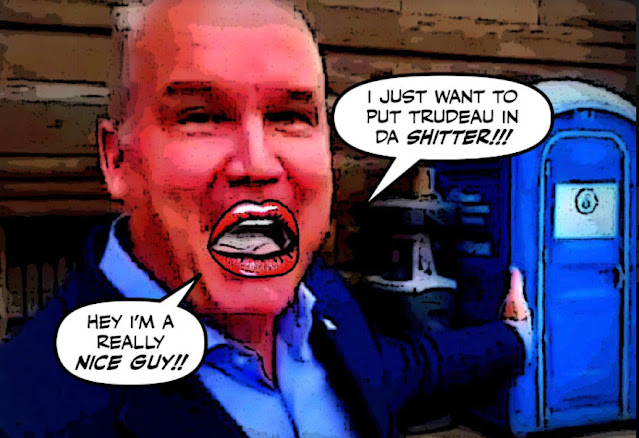 It's just too horrible.

Outhouse O'Toole will haunt them for a long long time. We'll make sure of that.

And it will help us destroy him and his Cons in the next election...

So now, whenever the errant fool gets up on his cloven little back hooves, all we will hear will be noises from the outhouse.

Is it just coincidence that the outhouse is blue or is it in homage to the place where the true blue Tool formulated his political platform and then forgot to push the flush button.

A term my father(RIP) used to describe someone when they were bullshitting was, "there, another shithouse door blew open!". The perfect description of the tool and his grade 5 potty humor. The absolute childish petulance of it all is repeated over and over again in comment sections of our pathetic MSM from the tool's trolls. Turdeau, PM socks, ballerina, turdbrain, climate barbie, etc. etc. etc. I think to myself, where have I heard this type of crap before? Right! In grade school from the class bullies. Besides the bullies who saw the errors of their ways via a bloody nose or having to pick their teeth off the ground, I guess some never grew out of that as is witnessed nowadays. The Cons are those same bullies from grade school. They bring nothing to the table, they attack, they mock and then they chuckle about it. Ha ha. Pathetic.
The Qservative party of Canada is rife with truly nasty, dangerous people. They make me sick and will literally make us all sick if ever elected. The toxicity that Harper brought to the party is now a full feature of who they are and when you add Cheryl "BarbieQ" Gallant into the mix, it's no wonder death threats against the Libs are now the norm. The tool has given her a pass and Dale Smith and Micheal Coren are the only ones in media that I know of who have condemned her latest psychotic rant. Reporting something is one thing. Not condemning the bat shit crazy Gallant is another and edges us a little closer to becoming just another failed state of the Divided States of America.
JD

The tool reveals he is a child and thinks his body function humor is funny. This is lower than a Trump insult,

Recently I've been seeing an "ordinary man" ad for O'Toole that I am afraid is actually sorta good.
So thank heavens the 12-year-olds who are apparently running the CPC party now also came up with this outhouse ad, which is so bad it will completely kill any positive buzz that the other ad might have generated.

Hi rumleyfips...Yes, O'Toole has finally revealed himself. As you know he never fooled me, I always knew he wasn't what he appeared to be, and that a man who who cavort with religious bigots, far right extremists, and the Canada Proud goons was capable of anything. But I have to admit that toilet video did shock me. A man so vulgar and cheap doesn't have the right to even dream of being prime minister...

Hi RT...I don't know if it's a coincidence, but I know I'll never look at a kibo the same way again. And believe me, O'Toole will own one of those outhouses on this blog until the day he is defeated...

Hi JD....You are absolutely right, the Cons are the bully party, and have been since Harper took over the party. He poisoned our political life with his Republican style attack ads, and the arrival of Trump only made things worse. Their ugly bullying of decent political leaders is what motivated to take up blogging and try to give them a dose of their own medicine. When I think of the Cons these days I think of a pack of screaming jackals, with no respect for our political traditions. But the good news is that their shit posting has led them to places like that outhouse, and they are now only hurting themselves. Whether they agree with him or not, I believe most Canadians appreciate the basic decency of Justin Trudeau, who has never responded in kind to all the filthy propaganda aimed at him. It's my idea of how a Canadian politician should behave, and hopefully that decency will bury those ugly Americans...

Hi Steve...yes you're right, even Trump didn't resort to that kind of potty humour. It's a new low for Canada, and yet another reason the Cons should never form a government...

Hi Cathie...I know what you mean. I was also distressed to see O'Toole masquerading as a nice guy. But I knew that sooner or later his mask would fall off, and boy did it ever. I have heard rumours about the real O'Toole, and as far as I'm concerned his toilet ad confirms them all. I am disappointed our wretched media is trying to ignore this ugly episode. Can you imagine how they would have treated the story if it had been a Liberal making such vulgar comments? But I certainly will never let them forget it...