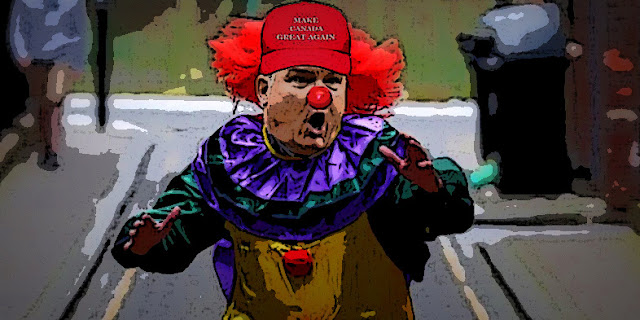 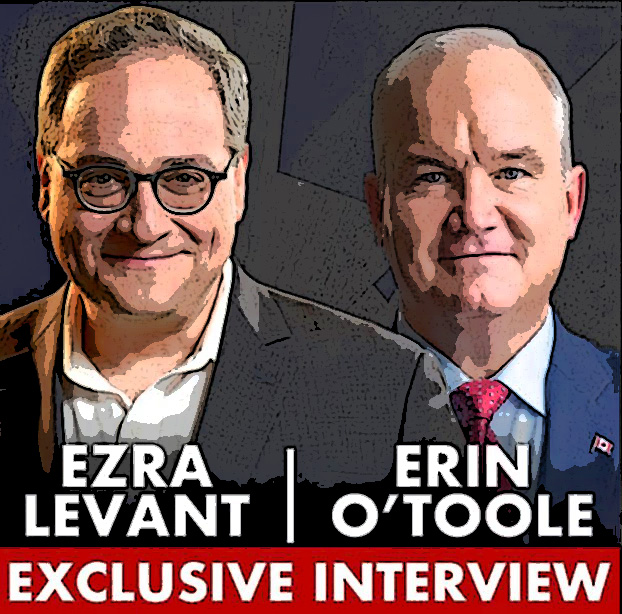 O'Toole and his Cons are cozying up to Ezra Levant and his hate mongering Rebel gang.

You might think that the Cons had learned their lesson, after Andrew Scheer was forced to give up his cozy relationship with Levant after the neo Nazi horror in Charlottesville. 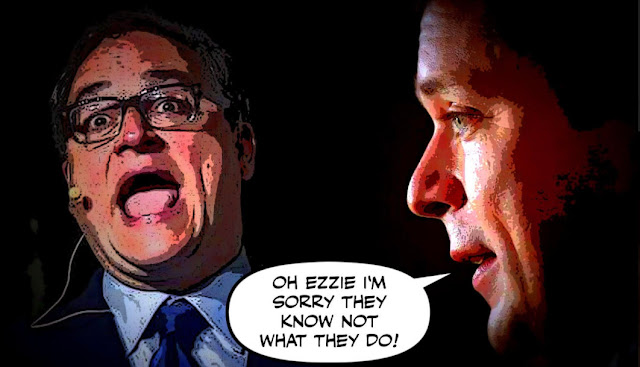 But no, they just couldn't restrain their bestial impulses.

And to make matters worse, when O'Toole's press secretary, Melanie Paradis denied it was a real interview, Levant released some e-mails, and made her and O'Toole both look like fools.

But of course it's not funny. No leader of any Canadian political party should have anything to do with Levant and his grotesque low life bigots... 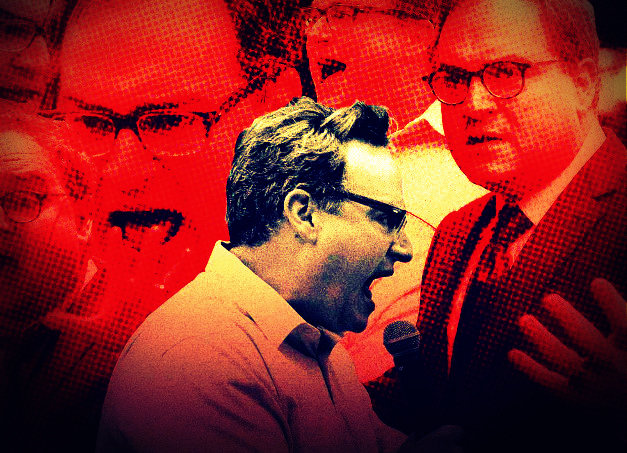 But as Campbell Clark points out, O'Toole's Cons just can't quit the Rebel.

Why does it matter? Ms. Paradis insisted it wasn’t an interview and said Mr. O’Toole won’t do one with The Rebel in the future. The answers were mostly stuff the Conservative Leader has said before about China.

But it just reopens a can of worms that keeps the Conservatives squirming time and again because they are so slow to draw bright lines between their base and unacceptable extremes. And it comes at a time when we’ve just had an object lesson from Donald Trump about how dangerous that can be.

Once again, the Conservatives are allowing people to wonder if they can’t decide to quit a site that is both influential with some on the right and pariah to many Canadians.

And not only does it blow O'Toole's claim to be a moderate right out of the water.

It also draws a straight line between his Cons, the Rebel, and the fascists who ransacked the Capitol. 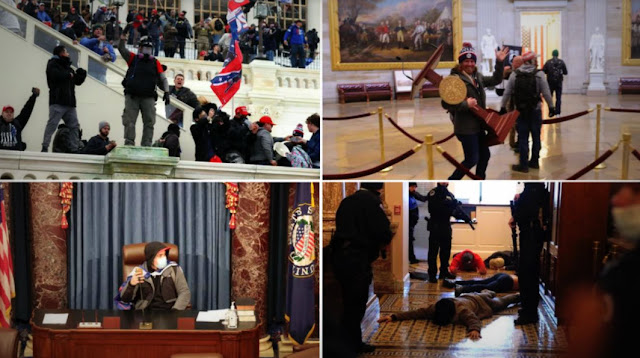 Last week, The Rebel’s Keean Bexte was at the Capitol in Washington tweeting that the U.S. election was stolen, and that “all these people wanted was to have their voices heard, that is all.” This week, Mr. O’Toole was touted on the site.

Answer: just to try to "get" Justin Trudeau.

What this stance O’Toole is making demonstrates is what I talked about in my weekend column – that his party is still happy to turn a blind eye to racists and white supremacists when they think they can use them to score goals against Trudeau.

For they too are hate mongers, and some things never change.

That O’Toole says they won’t respond to Rebel inquiries in the future is not comforting, because this demonstrates that they still considered this an audience worth engaging with until they got caught.

And between that, and what happened in Washington, this time it's going to cost them. 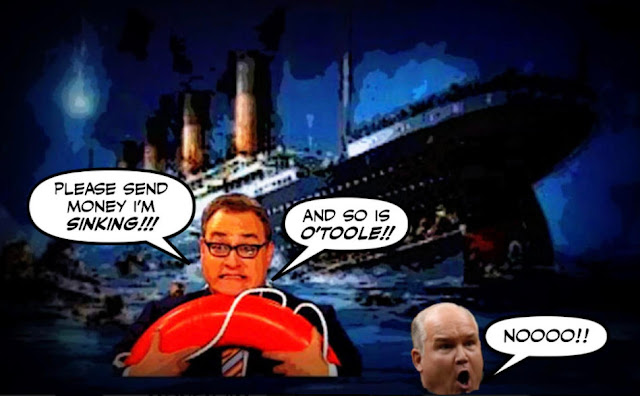 Levant and O'Toole deserve each other.

The Cons are Canada's Trump Party.

This isnt the first time Trump Party North has been caught in bed with Cobra Commander Levant's rabble rousers.

In the aftermath of Charlottesville, Andrew America had to distance himself from the rebel. This was because the rebel's very own White Power Barbie was in the thick of the racist action! Said white power Barbie even interviewed Presidential candidate Scheer. the conservative party was supposed to have learned its lesson.

Not so fast! they just cant quit the Rebel!

With their approval numbers not budging and the PM's rising the cpc made the cynical calculation that they can no longer ignore their racist paranoid base.

So once again the Conservatives prostitute themselves to the Rebel....OOOPS history repeats itself!!!!! YET AGAIN ANOTHER REBEL personality is in the thick of the latest Trumpian-riot. So once again the trumpnorth party has to distance itself from the rebel! Ezra must be delighted with himself, especially when he just publicly "cucked" the cpc. LOL!

But what makes this ordeal more delicious is the feebly incredulous response by that pencil neck luminary ibbitson...oh we have no connections to trump!!!! but the liberals will try HAHHAHA! Cue the world's smallest violin. As if the Conservative party's continued flirtation with MAGA isnt obvious for everyone to see!

Tucker Carlson's muse from Oklahoma, the Annie Okie cosplayer crying her mascara out in the Walmart parking lot, "won" a participation award from Maclean's for being the "hardest working" MP. Hardest working at what I wonder? Blocking people on Twitter and sabotaging the health committee for a conspiracy-theory fishing expedition?

Canadian M$M is absolute garbage birdcage liner. They're just as much invested in trying to "get" Trudeau because they're all one and the same. They pretend to cry foul about Ezra even as they published an op-ed by him where he whined that his free speech was being silenced by meanie bully Chrystia the schoolmarm. They won't say boo about Jeff Ballzinger, they just call him a "conservative strategist" instead of a hatemonger pulling the levers at hate websites. Adam Vaughan nailed it in a recent tweet when he pointed out that so many Rebel rousers got their start at the Sun. But don't look too closely at the Sun. You're supposed to turn a blind eye.

There is no truth in the news and there is no news in the truth.

The Retrumplicon party of Canada is clearly the choice of our most repugnant citizens. Have been for a long time now. The tool and his minions know this and will not risk losing their votes so they pander to them and they love it. If the tool had any semblance of decency he would reject and distance the party from the rebel and their ilk but he wont. That would require courage and integrity. The MSM could easily connect the dots and do a massive exposé for all to see but they dont. That as well would require courage and integrity.
If JT throws our money their way I will not be happy. Let the MSM die as we know it and maybe, from the ashes, something good may come of it. Independent journalists like Dale Smith are a great example of what this country needs. He answers to no one and no one controls what he writes. Journalism as it should be and in these times, exactly what we need and deserve.
JD

The Cons hitched their clown car to the US propaganda machine over a decade ago. A simple strategy; copy the Republicons and Canadianise it by blaming Trudeau. First Russia was the bad guy while Harper did lopsided deals with China, then it was bomb the middle east while Trudeau was berated for suggesting that peace keeping missions and winter clothes would be more beneficial, then Trump nixed the middle east and turned it over to Putin and friends while turning the propaganda machine on China with the Cons following in lock step. Where will the clown car go next? Perhaps follow Trump over the cliff in a spring election? They have never been in more disarray as the US propaganda machine pauses for some self refection.

Hi anon@9:53 PM...Yes, some things never change. Ezra Levant, the Rebel, and the Cons are birds of a feather and flock together as all miserable bigots do. O'Toole knows that he needs his rabid base and I imagine that most of them are Rebel readers. As for Ibbitson, he is is simply pathetic. He doesn't even bother to try to conceal his Con bias. But he's a senior editor at the Globe and I guess that's what his masters expect. Sad...

Hi Jackie...Maclean's has really gone downhill. Those awards are a joke, and if other MPs voted for Rempel they must be out of their minds. I know Ottawa is a small pond, and the media lives in a bubble, but can't they see the big picture? Sadly Rempel has always been a favourite of the many old geezers who populate our parliament, but surely they can see that she is becoming more mentally unstable with every passing year. And yes, you're right: "There is no truth in the news and there is no news in the truth." There will be a reckoning and it will be a harsh one...

Hi JD....If we could clone Dale Smith the parliamentary press gallery might become worthy of respect, but as it is now the gallery is everything it shouldn't be, both hideously biased and terribly mediocre. I think the problem is they inhale their own farts, and are hideously arrogant for no good reason. How they can fail to see how the Trump cult is poisoning our politics is simply unforgivable. And with an election almost certainly less than a year away, we need to denounce them as strongly as we can...

Hi RT...Between Trump's falling star and the pandemic, the Cons have never looked weaker and more vulnerable. Like the Republicans the party could split again into two factions, and with the absurd Maverick Party threatening to cost them support out west, I am really looking forward to the net election. I'm already hearing grumblings from the Cons about the way O'Toole is orienting the party, and he has only been leader for less than six months. I'm pretty sure that if he loses the next election his days will be numbered...