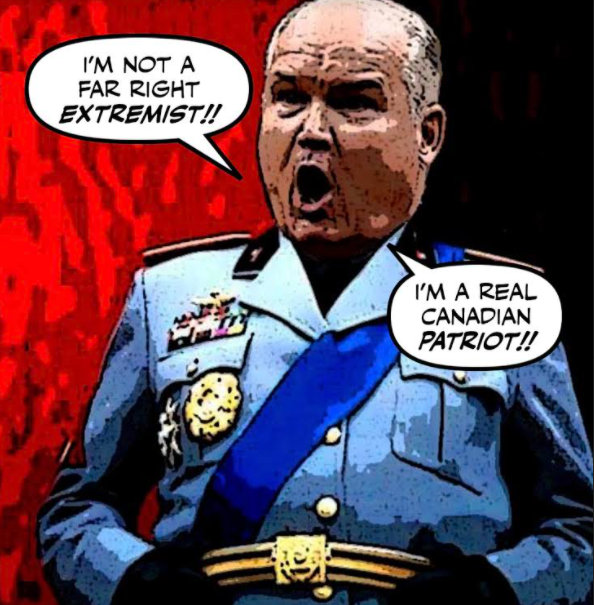 Golly, what a difference a day makes. Yesterday the Con clown Erin O'Toole was claiming that there was no room for far right extremists in his grubby Trump Party.

But today he is struggling to deal with an even worse problem, if that's possible. 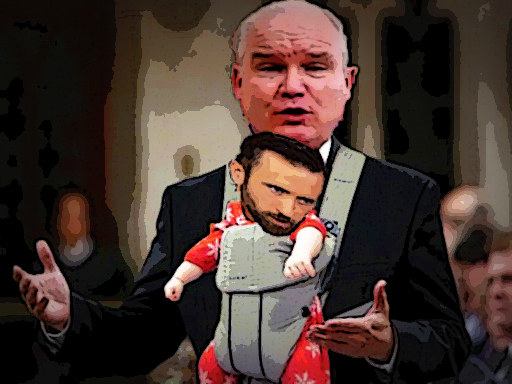 For after coddling the vile SoCon bigot Derek Sloan, and hugging him to his ample bosom, now he's trying to expel him.

Conservative Party Leader Erin O’Toole says he has initiated the process to remove MP Derek Sloan from the party’s caucus after he accepted a donation from a “well-known white supremacist,” Paul Fromm.
But while he may manage to do that, if he can convince a majority of his caucus to support him, Sloan is fighting back.
In a series of tweets, Sloan said he became aware of the donation Monday afternoon, saying Fromm, “a person with known connections to racist groups, donated $131 to my campaign.”
Sloan said, “at no time was I ever aware of this donation,” adding that his campaign received over 13,000 separate donations, which were handled by volunteers.
And accusing the Trump Party of gross hypocrisy... 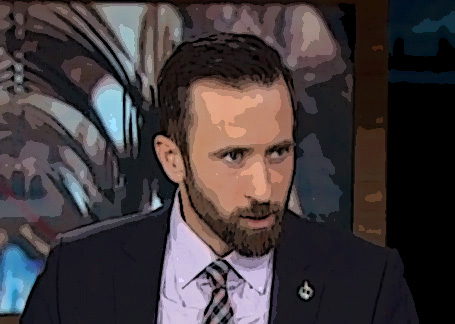 In a statement later released on Twitter, Sloan said the donation was made under the name Frederick Fromm and said the Conservative Party accepted a 10 per cent cut. Sloan also claimed Fromm applied to be and was accepted as a party member last summer.

“Therefore the Party, and the O’Toole campaign, failed to uphold the same standards to which they are now applying to me,” he said in the statement.

And who can blame him?

When O'Toole himself is also guilty of the most grotesque hypocrisy... 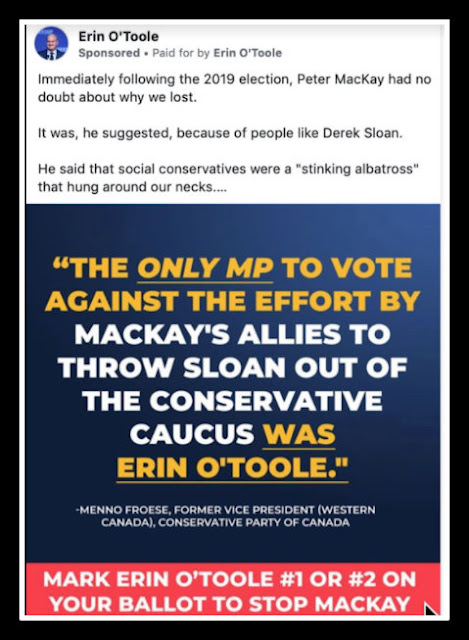 So as Aaron Wherry points out, trying to shake off that Trumpian stain won't be easy.

In his defence, O'Toole touted a number of his beliefs and political positions on Sunday. He has said he wants the Conservative Party to welcome "all Canadians, regardless of race, religion, economic standing, education, or sexual orientation" and to "govern on behalf of all Canadians."

But Sunday's statement didn't include O'Toole's previously stated desire to "fight" to "defend our history, our institutions against attacks from cancel culture and the radical left." That was an idea that O'Toole put front and centre when he announced his candidacy for the Conservative leadership in January 2020.

While speaking to a group of campus Conservatives about residential schools in October, he also said that "most of the lefty radicals are also the dumbest people at your university."

So "lefty radicals" might be entitled to ask whether O'Toole would really govern on behalf of all Canadians.

Especially since Sloan is a darling of the far right extremists and the SoCons who made O'Toole leader, and purging him could divide and demoralize the Cons, with an election looming on the horizon.

So I very much doubt that O'Toole will ever be able to remove that Trumpian stain, or change the toxic culture of his monstrous party.

Not when the Trump Party North is more American than Canadian. 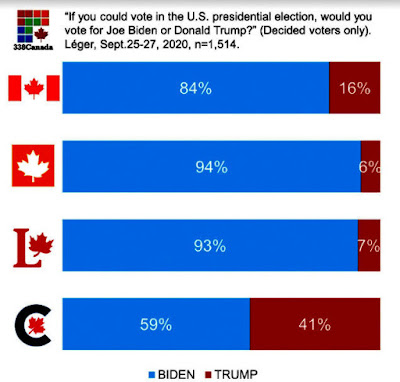 And not when O'Toole is already damaged goods...

You know, we may live in scary times, but there are some good things, and one of them is that we do have an historic opportunity,

The Cons are stumbling around like wounded beasts, lost in a darkness of their own making, and drowning in their own excrement.

In the U.S.Trump is destroying the Republicans.

And in Canada, O'Toole is destroying the Cons... 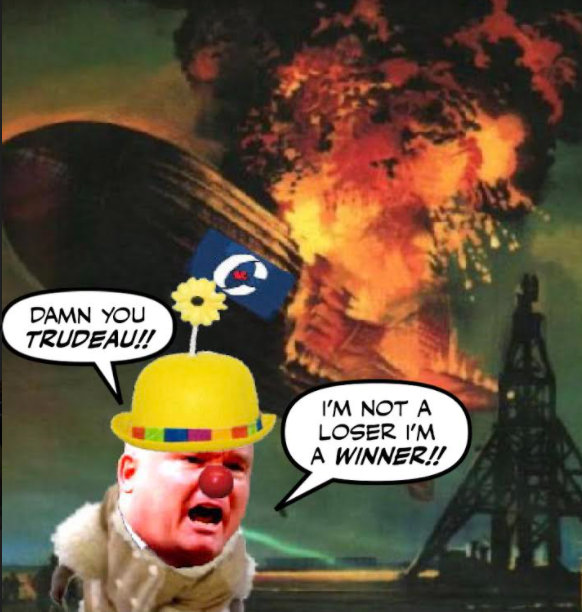 So there has never been a better time to kick them when they are down.

Hit them where it hurts.

And with a little luck, hopefully finish them off...

Save these for posterity. Even [Coyne](https://www.theglobeandmail.com/opinion/article-the-conservatives-have-a-hypocrisy-problem-that-goes-beyond-derek/) says Sloan's defenestration doesn't pass the smell test, while [Susan Delacourt](https://www.thestar.com/politics/political-opinion/2021/01/19/its-no-surprise-that-derek-sloan-found-a-home-in-the-conservative-party.html) says Sloan is right to be shocked that gambling was not allowed in this Trump North casino establishment. Hypocrisy, thy name is Eric O'Foole.

The policy convention, where Campaign Life and their ilk are going to be pushing hard to advance their agenda, is going to be table stakes. Rumor has it O'Foole was looking for a quick and dirty excuse to defenestrate Sloan in hopes of demoralizing [the cranks he was recruiting](https://www.westernstandardonline.com/2021/01/exclusive-source-says-sloan-purge-about-stopping-social-conservatives-at-party-convention/), and hide them in plain sight. O'Foole is trying desperately to memory-hole his and the party's Trumpishness, which we all know is a feature, not a bug. The LPC war room I'm sure will come out swinging come campaign season, but with the MSM having a habit of selective amnesia, it's up to the grassroots samizdat to ensure that Eric won't be able to wash off the orange stain.

Brownshirts in blue suits is who they really are.

Historically the Cons have been primarily funded by legacy industries with broken business models as well as resource speculators that require a friendly government to either delay the inevitable or create short term enrichment opportunities. Initially the Cons saw the rise of social media and virtual truth as a weapon to gain support and hide their mercenary mission. Trump changed all that, all but the fanatically blind can now see that once truth is gone a charismatic (right or left) dictator/single party system will fill the void. Once it is established all personal profits and bonuses from lobby efforts become subject to the whim of the new gang leader. Not exactly a comforting scenario for most of the big money backers. As a result regaining control through expulsion or finding new methods of controlling the virtual truth ecosystem is now top priority for the Cons. Like you Simon I am all for kicking them when they are down and worry about what might rise out of the ashes later.

At the leadership convention, 4 racist, sexist, bigots ran. The reformatories picked the one they thought they could disguise as a decent person. Didn't work.

They have pitched an ever-shrinking tent and only those with shrunken souls gain entrance.

I was rather disappointed when O'Toole won the leadership. I had thought that getting the totally incompetent Peter MacKay would really help destroyed the conservative party. I clearly underestimated O'Toole's capacities. Long may he remain the leader!

The Tool has been given his marching orders to squash the distraction and get back to promoting the tarry oil disinformation contained in the attached opinion piece. Burning a barrel of oil to extract 2 from tarry sand does not come close to simply pumping light crude to the surface.... yet here we are, a thin veneer of false comparisons makes it so. Virtual truth in action. The Cons will not change,just suppress the pointless whoppers so the ones that put money in their coffers become more credible.

The tool thinks that by booting Sloan from caucus, his racist problem from within the party will simply just go away. Au contraire, Herr Hairless. He's merely picking off a scab from the festering wound that is the conservative party. What about MAGA lover Bergen? Too full of herself to even offer an explanation as to why she wore the twenty first century's symbol of hate. The tool says it wasn't hers. How lame is that? First, I didn't know he was her official spokesman now and secondly, if this is the accountability she offers in opposition, imagine how these losers would govern. Well, that one's easy. Pretty much like their former but still Dear Leader Harper did. With absolutely no accountability.
I could go on but the sad fact is most if not all of the Con caucus has at one time or another exposed either their racist, homophobic or misogynistic selves. They're rotten to the core and once Sloan has been excised from caucus, we need to keep exposing them one by one. The truth is out there and the tool is having a really hard time handling it.
JD

Hi Jackie...Not only will I save Coyne and Delacourt's articles in my files, I'm planning to write a post on them so I never forget what they are saying and can call them up more quickly when I need them. I'll be very interested to see what impact Sloan's expulsion has on the Cons, but it won't be a good one. And if O'Toole thinks he can fool Canadians into believing the Cons are now a more moderate party, he's got a another thought coming...

Hi RT....I am greatly enjoying the way all kinds of businesses are punishing Trump and the Republicans who refused to accept the election results. We should aim to do the same to our Trump Party. Ask businesses whether they really want to subsidize neo-Nazis. If Trump’s terrorists should cause trouble in the next few months, and Sloan’s SoCons revolt, the table should be set for a Spring election, and another Liberal majority...

Hi Rumleyfips....You’re right. The Cons had the worst collection of leadership candidates this country had ever seen, and O’Toole won by getting support from the moderates and the SoCons and far right extremists. And then they wonder why they have problems...

Hi Steve...I hope you’re right. I’ve been reading some of the comments at Sloan’s Twitter site, and he’s been getting a lot of comments from people claiming they’ll never vote for the Cons again. And if the Cons lose just 5% to 10% of their base, they won’t stand a chance of winning the next election...

Hi jrkrideau..., I think I felt the same as you did,, and I was pleasantly surprised when I found out that O’Toole had been secretly pandering to far right extremists and SoCons. His grubby opportunism won him his leadership, but now he’s paying for it and it serves him right...

Hi RT....Jack Mintz is a member of the so-called Calgary School. He has always been a Con and an oil pimp, and everything he says should be taken with a pinch of salt. The idea of Canada starting a trade war so Kenney can keep pumping even more tarry oil down to the U, S. Is absurd. I’m happy Biden cancelled the XL pipeline, and so should all Canadians including Albertans. It’s time to get serious about climate change and retool for the future....

Hi JD...The Con caucus is not only riddled with SoCons and far right extremists, their Trudeau hating base will make O’Toole pay for expelling their darling Sloan.So purging him will not save him. The Cons have been going down the wrong road for a long time, and now it’’s rime they paid the piper. The Con media has been showing some signs of finally coming around to the reality of the situation, but they have to do a lot more to make up for what they should have done long ago...