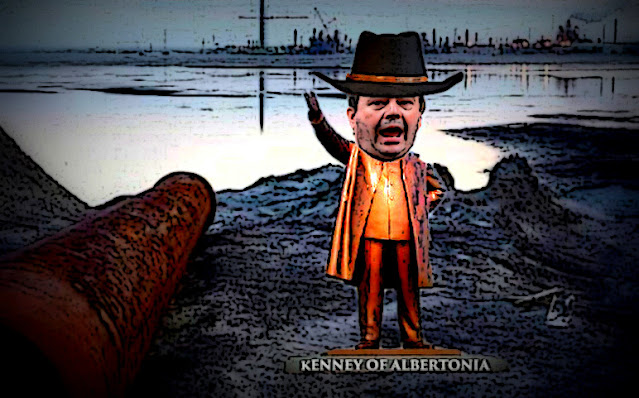 Jason Kenney wanted to be known as the father of the new Alberta, or Albertonia. The Tarry Daddy of Big Oil.

But it's all gone horribly wrong.

His mismanagement of the Covid pandemic has led to thousands of unnecessary deaths.

The economy is shrinking, his polls are tanking.

And now he's been humiliated. Again. 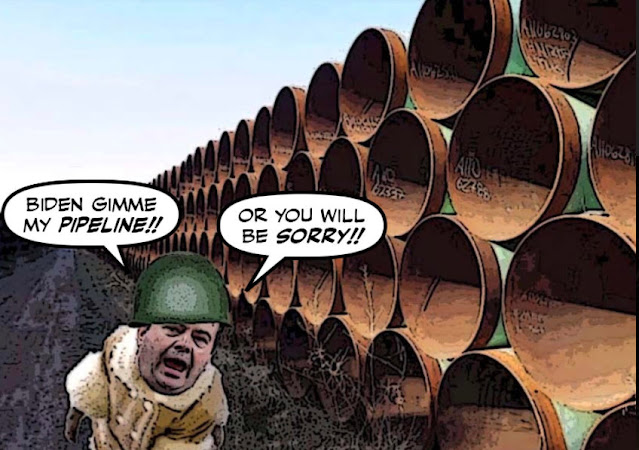 For demanding that Canada declare war on the U.S. for killing the XL pipeline.

Alberta Premier Jason Kenney is calling on Ottawa to press Washington to review its Keystone XL decision, saying trade sanctions should be implemented if that doesn’t happen.

Even though most Canadians outside Alberta don't give a damn, the Liberal government is more interested in working with Joe Biden on climate change.

Federal Environment Minister Jonathan Wilkinson signalled Tuesday that the Canadian government won’t dwell on U.S. President Joe Biden’s decision to revoke the presidential permit for the Keystone XL pipeline, and will instead seek to ensure there is no better ally to the United States on the climate file than Canada.

And Kenney's war on those trying to fight climate change has made him no friends in Washington or any other place the planet burning Cons don't govern.

And even in Alberta he has lost the support of people like Jen Gerson.

Dear Alberta Conservatives:Now that U.S. President Joe Biden has followed through on his promise to cancel the Keystone XL permit, I have to ask you all a simple question: How is this working?
Who asks a devastating question, and puts her finger on the real problem:
Something needs saying here, and there's no way to say it kindly. Boom times and wealth have conditioned Albertans to believe that we matter a lot more than we do.
Money gave this province delusions of self-importance that is reflected in a premier whose bombastic bar-brawl banter is increasingly revealed as short-man bluster. We're the guy who gets drunk and picks a fight but can't actually land a punch. 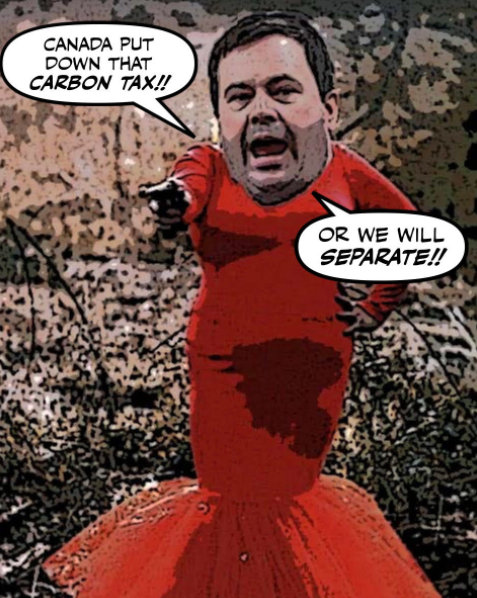 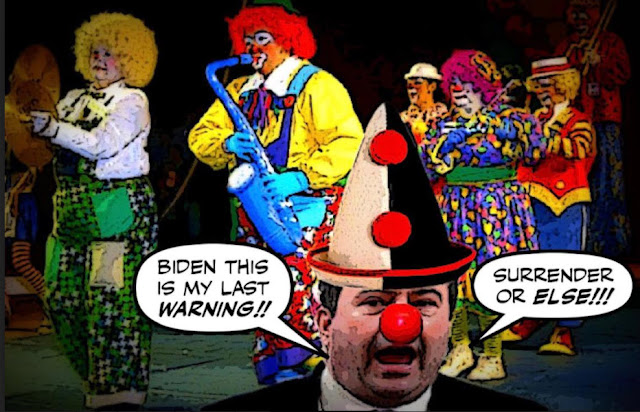 And all I have to add to that is this:
Albertans hitched their fate to the Con clown Jason Kenney.
Unless they can get rid of him, they will go down with him.
And they will deserve it...
Posted by Simon at 1:17 PM

Sorry, Simon, I have to disagree. Nobody deserves to go down on Jason Kenney. As an incel, even he recognizes that.

High roller Kenney sinks 1.5 billion of Alberta's money in XL during an election year. He is now insisting on helping Alberta teachers manage their pension fund and helping ranchers and nature lovers get a clear view of the Rockies by bulldozing the landscape in preparation for open pit coal. Now thats a Con with vision!

Why should Ottawa give a damn? They got stuck with that crap pipeline over the Rockies thanks to Harper poison pill legislation. Not going to get stuck defending a bad idea on both sides of the border.

Jan is right (I never believed I would say that.)

It should be dawning on Albertans that they hit peak tar sands oil in the 2000s and now it is in decline. No US/international banks want to finance more tar sands projects due to the environmental cost (and more importantly to them the massive $$$$$$ clean up cost.) Even the importance of oil has been diminished in the finance markets like EXXON-Mobil getting booted off the Dow Jones Industrial in small part because of their now almost worthless stakes in Alberta Tar Sands (and their terrible management/poor decisions as well as poor future prospects due to peak oil.)

These are the tough times when you need that massive Heritage fund... what do you mean it's only 16 billion?

AB won the LottoMax of Provincial Resources and pissed it away (sadly like most lottery winners.)

As for the rest, AB can scream about the PET Liberals and their NEP (which happened ALMOST 40 years ago) or equalization payments but almost constant Tory inept rule and delusions of supply side economics (no sales tax or even a modest provincial income tax) have pretty much drained the province of whatever petro windfall and AB kept voting them in with religious fervor (while screaming about Ontario electing Liberals federally.)

Ever wonder why Norway with its high taxes ended up with almost 1 Trillion USD in its fund? They didn't use oil revenue to live off of cause they had other tax revenue. They just kept dumping their oil revenue into the fund cause they didn't need to. Say what you want about taxation, but it is a necessary financial price of citizenship (something lost on the 1%ers bitching about high taxes.)

What do you call an idiot who blows 1.5 billion at a Trump Casino? Jason Kenney. What do you call an idiot who mouths off to a customer who's already importing 3.8 million barrels of tarry bubbly per day? Jason Kenney. What do you call an idiot who turns everything he touches into shit? Jason Kenney and or Donald Trump. The warning signs were there blinking in bright neon lights but Kenney ignored them. What an incompetent fool. Someone needs to sit him down and tell him in no uncertain terms that to avoid further embarrassment and possible further cuts in exports, he needs to STFU. Let the adults in Ottawa handle it. He and his fellow ying-yangs Duh-g Ford and Erin O'Trump have thoroughly embarrassed Canada with their bull in the China shop diplomacy that will appeal only to their rapidly decreasing bases. At least there's that positive to come out of this. O'Trump's ridiculous video "I just got off the phone with Pfizer's CEO", without saying what they discussed is as bizarre and pathetic as it gets. We know we can't fix stupid but we can most certainly vote it out come election time.
JD

Surprised Kenney didn't borrow a page from Dug and threaten to go light up some firecrackers up Biden's ying-yang wazoo. Too busy going on Fux News to whine and complain and blame his failures on everyone but himself. Memo to Kenney: The USGov and the health of the planet don't give a damn about his populist incompetence or 40 years of imagined grievances against the cursed name "Trudeau."

Biden gave Trudeau some cover here. The more O'Stoole keeps bitching and moaning and echoing Kenney's nonsense, the more out of touch he looks on the climate file and everything else, regardless of what kind of "theatre" he pretends with phony gestures like ejecting Sloan. A new ad is already out reminding voters that he's Kenney's bitch. So what does O'Stoole do but put out a counter-ad saying it's fake news from the lying Liberals and blaming failing loser Trudeau. But he's not Trump, nosiree Bob, that's a whole lotta malarkey!

Trudeau has every reason to campaign on the fact that the Cons, not he, would end up getting Canada and the U.S. off on the wrong foot. Whichever foot it is, is likely to be the one that Kenney and O'Stoole end up putting in their respective mouths.

Good stuff, as always, Simon.
But you have a typo: it’s Jen - not Jan - Gerson

Hi anon @1:58...I can't imagine anyone wanting to go down on Jason Kenney. I imagine that after almost fifty years of chastity it's the other way around *shudder*

Hi RT...I understand why so many Albertans were fooled into voting for Kenney. All he had to say was "I hate Trudeau more than ANYBODY!!!" and they went for him like a trout goes after a fly. But they really should have done their homework, for everything Kenney did when he was in Ottawa turned out to be a real disaster. And I'm afraid the same thing is going to happen in Alberta...

Hi Dan....I agree with everything you wrote, and I also never thought that I would agree with Gerson.😉 But she’s right, Kenney has done everything wrong. Alberta deserves better, it has a lot of young and smart people and they could fashion a better future for themselves. But Kenney is in the hands of the most reactionary Big Oil elements, and unless Albertans can give him the boot, nothing will ever change....

Hi JD...As I’m sure you know I have spent years chronicling Jason Kennedy’s disastrous record. He is and has always been a reverse Midas , with everything he touches turning to shite. And demanding that Canada declare war on a country that buys about 95% of Alberta’s oil is so absurd Kenney should be locked in a rubber room. The province has enough pipelines to get it through to a greener future, but they’ve got to accept that the oil era is drawing to a close and start putting some of their oil profits into new and cleaner forms of energy. I grew up near Scottish fishing villages where all the young fishermen went off to work on the oil platforms in the North Sea. But although Scotland has been hit with the same falling oil prices as Alberta, they have managed to invest enough money to create a thriving renewable resources industry. So there is no reason Alberta can’t do the same. After they fire Jason Kenney....

Hi Jackie....I’m sure that behind closed doors Kenney was threatening to overthrow Biden and return his good buddy Trump to power. It’s simply pathetic, and I only wish I could have seen the look on Kennedy’s face when Trump lost. As for that new anti O’Toole attack ad I’ve seen it on TV, and loved it., but I’m still looking for it online. It.’s a great idea, it’s about time somebody gave the Cons at Canada Proud some competition. Progressives have been far too gentle with the hate-mongering Cons and that’s got to stop....

Hi Martin...Thank you, I changed it. It would be quite a gaffe to spell Gerson’s name wrong, when for once I agreed with her. 😉

Sorry Simon. Though some of your post has a ring of truth to it, it is riddled with inaccuracies.