Erin O'Toole And the Monster In The Mirror 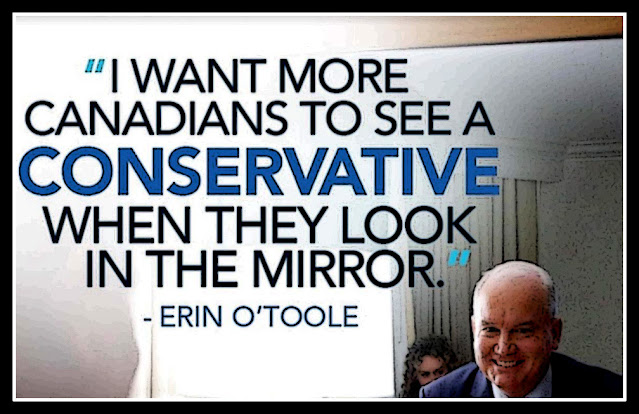 "I want more Canadians to see a Conservative when they look in the mirror."

And he liked it so much he ran it again and again.

But not any longer. Now the Cons are desperately stripping the ad off all their media platforms.

Because now they're afraid that when Canadians see a Conservative in the mirror, he might look like this guy.

I want to make sure more Canadians see a Conservative when they look in the mirror.

Are you with me? 🇨🇦 #cdnpoli pic.twitter.com/Iv8GsS2Alf

For what happened at the Capitol has made a lot of Canadians take a closer look at our Cons, and many don't like what they see.

Starting with O'Toole, who as I have pointed out before, made a desperate effort to become a third rate Trump imitator. 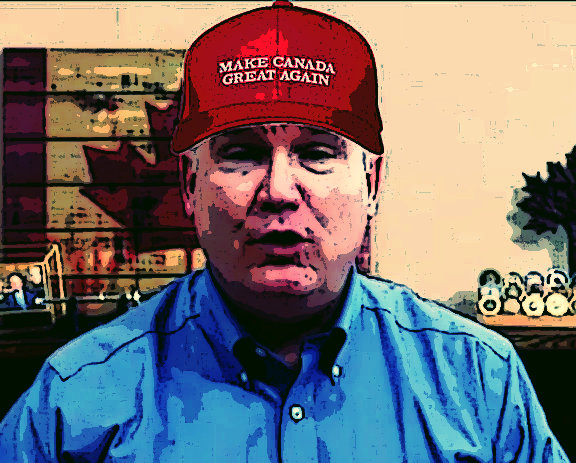 In doing so he is trying to duplicate Trump’s successful strategy of building a polarizing populist coalition of traditional Republicans and disaffected voters, reaching out to people who were furious with “cancel culture” and “the radical left,” revved up by “grievance politics” and fed up with “elites” who they believe don’t give a damn about them, their families, their jobs or their very existence.

Only to end up looking more American than Canadian... 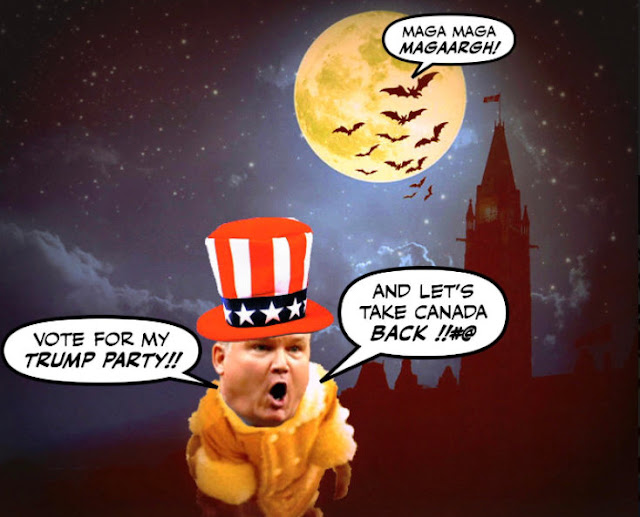 But it's not just O'Toole who is a pathetic Trump groupie, so is the Con's deputy leader Candice Bergen... 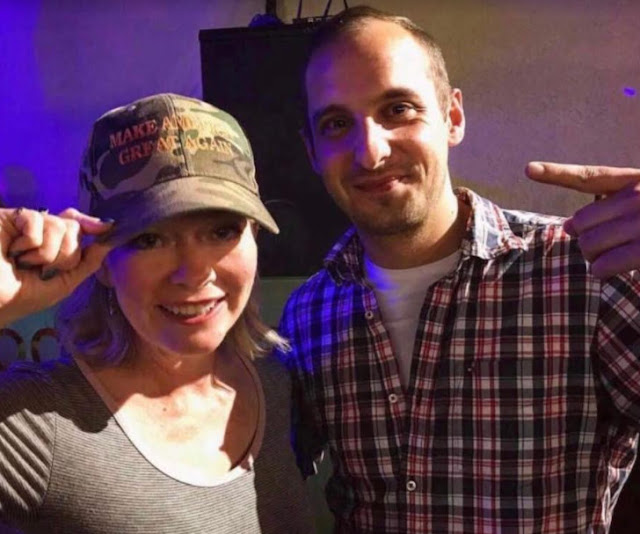 Even if she would rather not talk about her camo MAGA hat.

Or whether she's a member of the Trump Army 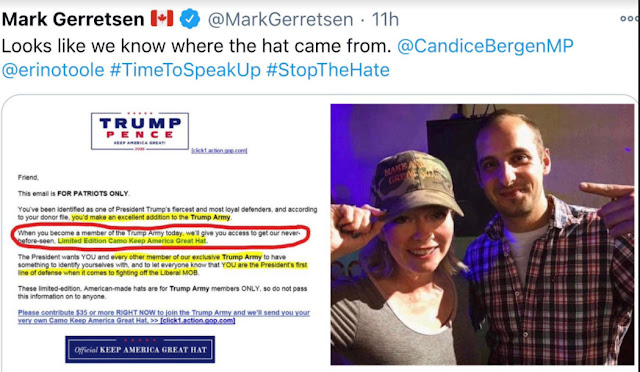 But definitely deserves to see herself in the mirror of shame... 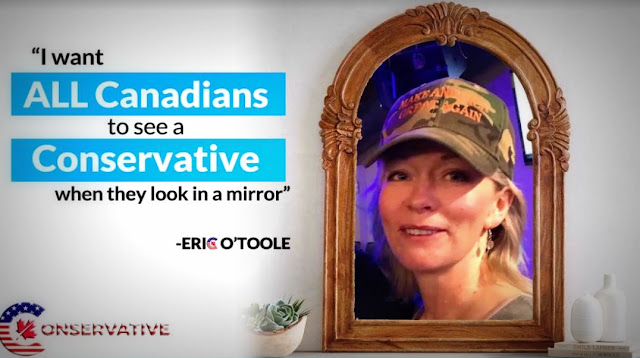 Then there's the Con Senate leader, the ghastly bigot Don Plett, who has never been shy about his support for Trump.

The day before, during a debate on whether the Senate should implement virtual sittings so senators can participate either online or in person during this pandemic, Plett called Trump his "good friend."

But strangely enough has yet to comment on what happened at the U.S. Capitol, and whether he still supports his good friend Trump as much as this guy does... 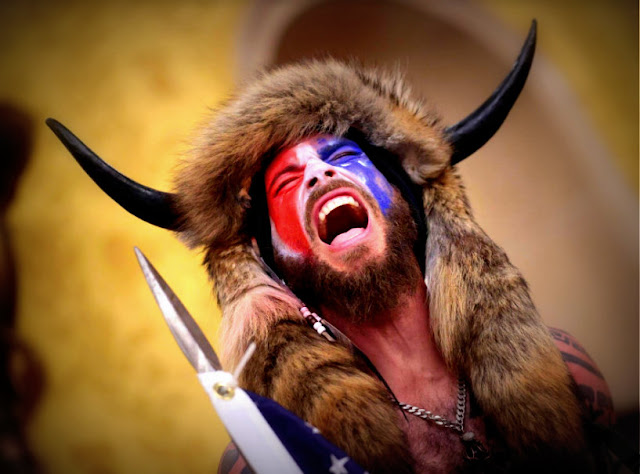 And while we're at it, let's not forget Devin Dreeshen, Alberta's agriculture minister who worked on Trump's 2016 campaign. 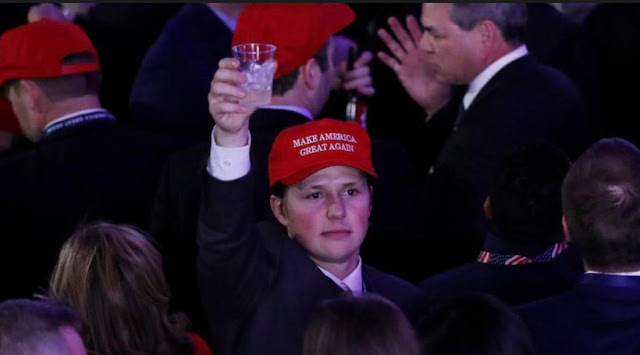 Or forget all the Cons who flocked to join the Trumpist social media site Parler. 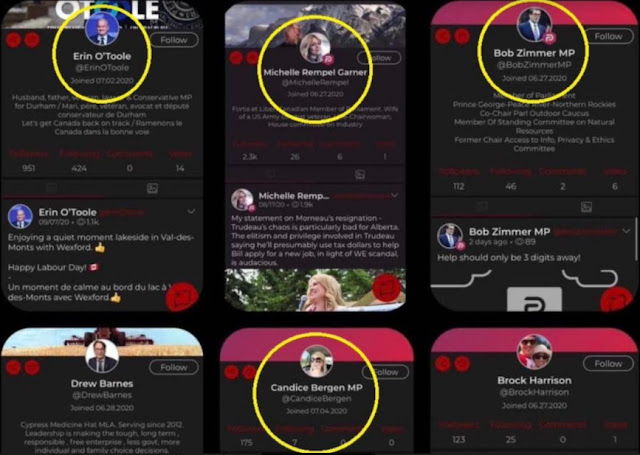 Even as it gets the boot for posts that clearly encourage violence.

Which only shows how low the Cons have fallen. Why they are now Canada's Trump Party.

And why those treasonous monsters must never govern Canada again...

I think even Fred Flintstone would be upset with the guy wearing the Loyal Order of Water Buffalo gear.

It gets even worse, Simon. O'Trump is now doing interviews with Ezra Leracist.

It's time for a Murdoch Inquiry. The M$M has created these monsters, emboldened and amplified them and now they're on the attack. Ibbitson and MacDougall already came out with their sputtering damage control: "we're not Nazis! Whatabout whatabout BLM and antifa? TRUDEAU DID BLACKFACE! Something something corruption carbon tax WeeeeeeGhazi!"

But it was Ibbitson's own paper that gave a normalization platform to Ezra, and Ezra in turn who employed McInnes and gave fertile ground for the Proud Boys to get their start. Adam Vaughan said it on Twitter this weekend when Lorrie Goldstein was trolling him, why have so many of these bad actors gotten their start at the Sun?

"Conservatism" is just a polite papering over of what they really are: Fascism. The hate that dare not speak its name. Follow the money: Investigate the media propagandists and fumigate the IDU.

The cry baby hateful anti-democracy conservatìve lunatics are here as well. Thanks for keeping this fact out there, Simon.

As a Canadian, the Tory party's willingness to emulate American political trends makes me uncomfortable. What with them adopting similar political slogans(Candice Bergen's Maga hat), voter fraud conspiracy theories and electing MLA's in Alberta that have worked in Trump's campaign.

Erin and his merry band of Trumplicans talk a good game when it comes to statues of John A Macdonald. His legacy is controversial to be sure but I wonder what Macdonald would make of his successors. Not impressed I think, knowing that conservatism in Canada has gone from "God save the King/Queen" Peace, Order and Good Government to make america great again ...er... I mean take canada back.

Yet, when I listen to Erin o toole's ilk talk about Macdonald's legacy, it is as if Macdonald was a confederate general. I am not pining for the return of British Imperialism, it just seems that Canada's close proximity to the southern "elephant" has confused alot of right leaning Canadians.

If I ever look in the mirror and see an O'Trumplicon I think I'd take a long walk off of a short pier. Or maybe try CONversion therapy to scare the asshole out of me. I don't know. There was a time, long long ago, when I would have voted conservative, based on their policies. Today, their sole policy is "we'll do everything better than the Libs" without actually explaining how. That's because they're clueless as to how. How could you possibly have a plan to help make life better for Canadians when you spend 24/7 of your time attacking the Liberals. That would be fine if they had verifiable evidence to justify their actions but they don't. The big lies keep getting bigger and their adopting the Trump playbook will be a sign to a lot of Canadians that they've hit rock bottom and will not be worthy of their votes. Decent Canadians far outnumber the Con base so if O'Trump is dumb enough to sail alongside the SS Trump my advice to him is don't forget your PFD.
JD

It seems that the social media moguls that based advertising revenue on peddling pay per click conspiracy propaganda to the disgruntled had an epiphany. Enabling despots is not in their best interest both from a personal and business perspective. Suddenly the virtual water has become very murky and the Cons no longer see a perfect reflection when they gaze into the stream. Perhaps there is another life giving stream over the next hill or possibly a desert.... will they find a new messiah to lead them in their quest for salvation so they once again proudly gaze into the virtual mirror?
Will the pendulum swing too far and transform the stream into a dead pool?
RT

I doubt the old fool leaves a reflection in a mirror.

Everyone should read "Rigged Canadian election? Why Canada's Conservatives can't seem to quit Donald Trump": by Max Fawcett in the National Observer

tracing the Trumpian infection eating away at the heart of the Conservative party of America, I mean Canada

Hi UU....I agree that Fred Flintstone would be upset with that horned freak, although I'm sure that Barney Rubble would be running for his life. Somebody on the internet called that QAnon crazy "Chewbacca in a bikini" and stirred up quite a storm with Chewbacca's fans demanding HIS head...

Hi JD...Yes, I saw that, and I just had to write a post. Levant is disgusting, O'Toole is disgusting, and I can't miss the opportunity to show why they belong together. With the Cons already reeling from the Capitol riots and all the Trump eruptions in their own ranks, tarring them with Levant can only hasten their total destruction...

Hi Jackie....I know the Murdoch lugenpresse are wailing like banshees, but I have never seen them look so weak and disoriented. Trump's MAGA maggots are abandoning them, and they don't know what to do. As for me, I'm making bets on who will drop dead first, old man Murdoch or Trump. But in the meantime I'm celebrating the death of Sheldon Adelson, because that's a big blow to the Republicans and other far right scum. And Adelson deserves to rot in the hell of his own making...

Hi Brian.....Yes, the fall of Trump and the Capitol riot have really shaken up the Cons, and as you say they are wailing like crybabies. I suggest that they can sense that there time is ending. They know that their evil empire is collapsing, and they know that like vampires the sunshine will kill them...

Hi anon @2:18 PM....Because our Con media didn’t report on it many Canadians are unaware of what a huge influence the Trump years have had on our Cons. Many of them influenced by their twisted social media really believed that Trump was a kind of prophet. And that with growing Americanization has done enormous damage to the social fabric of this country. Luckily the situation is not hopeless, our humble but precious values are our best protection, and that’s why I write about them so much. I like our rowdy neighbours, at least most of them. But the more different and Truly Canadian we are, the better our chances of surviving...

Hi JD....I admit I am fascinated by what is going to happen to Trump’s hordes, and what social media platform will most of them migrate to? Will Trump set up his own platform, and what would that do to outlets like Fox? Does Trump have the energy to do that and run for president again? Quite frankly I doubt it. I think he’ll bluster on for a while and then slowly collapse. And also quite frankly I hope that his legal troubles keep him too busy to cause any major trouble. Or even better, kill him....☠️

Hi RT....As I told RT, I can’t wait to see where the Trump MAGA maggots are going to end up. In their own stinking sewer or in a desert of a wasteland. As this point I think anything could happen. From more wild riots to the closest thing to a civil war. As I’ve told the others , I don’t believe that Trump has the energy to become a full time Messiah. And when his MAGA morons finally realize that he is more interested in golf than he is in them it could all fizzle out as post-Covid life returns. But then of course I’m the optimist here...😉

Hi Rumleyfips.... Since Trump is such a narcissist I like to think of him looking at his reflection in a deep pond, and then falling in and drowning. Now that would epic...