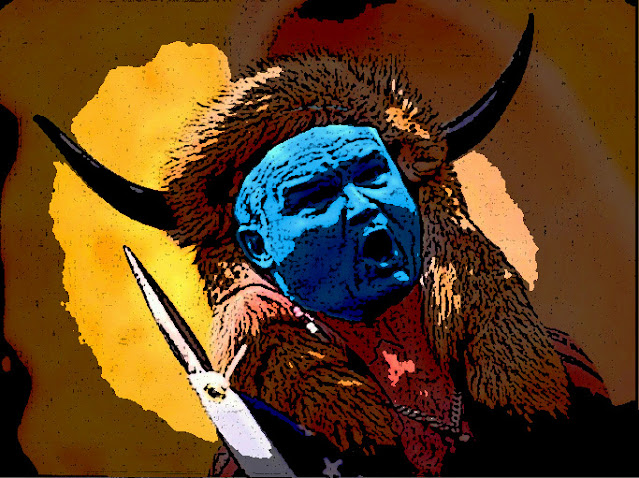 It's Erin OToole's worst nightmare, the one that wakes him up at night screaming MAGA MAGA MAGGAARGH!!

For just over four months since he became Con leader he was able to conceal who he really was, and what his party had become.

But not any longer. The fascist explosion at the Capitol blew their cover.

And the poll numbers don't lie. 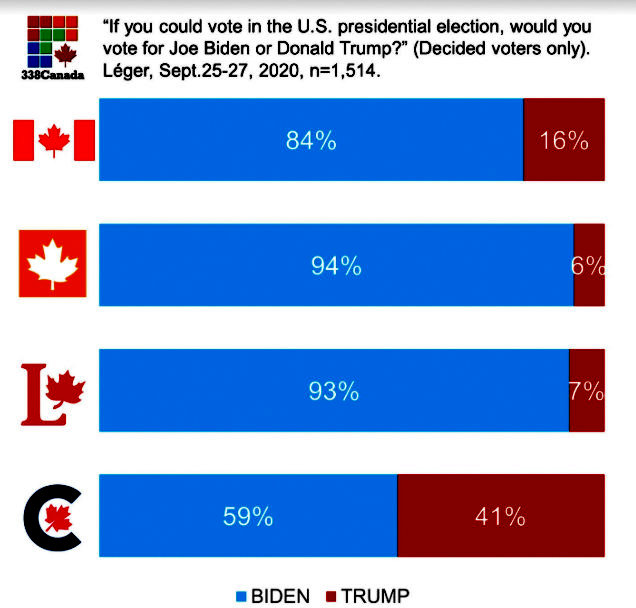 They are a stark reminder the  Cons are not a Canadian party like the others. Almost half of them are MAGA maggots who if they had been able to would have voted for Donald Trump.

And worse, like the terrorists who stormed the Capitol, they don't believe the election was fair... 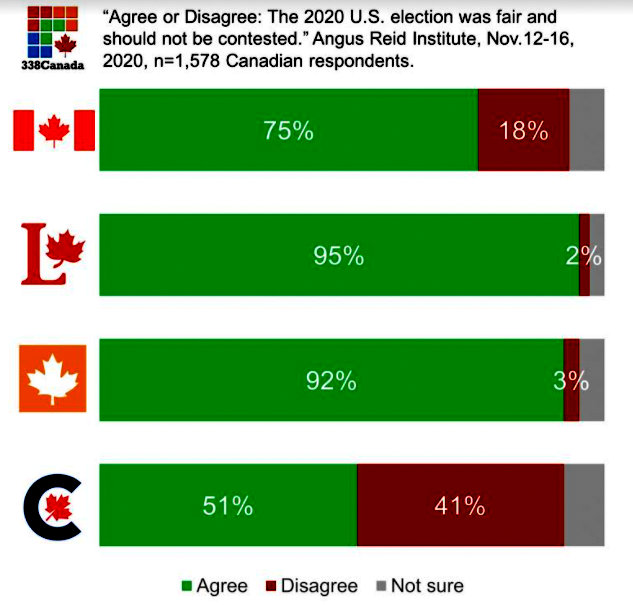 Which makes them a clear and present danger to our democracy, and in some cases even a terrorist threat.

But what must make O'Toole scream or bellow like a baby is that he can't lie his way out of this one. His words condemn him, in both official languages... 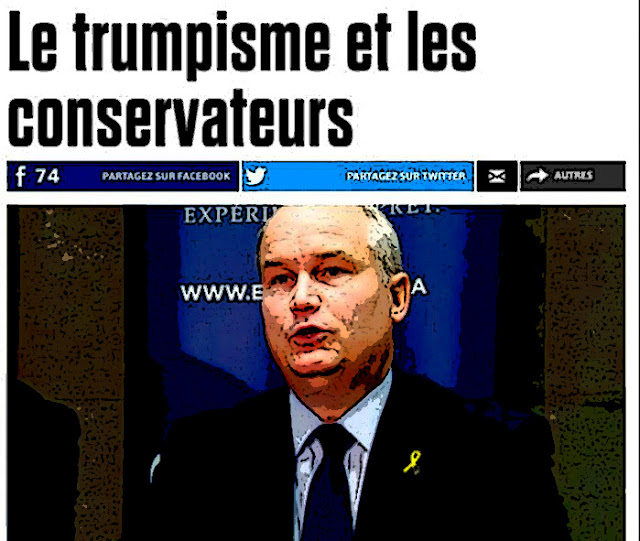 For now even Andrew MacDougall, Stephen Harper's former flak, is demanding that O'Toole expel the Trumpists.

Whether Erin O’Toole likes it or not, his Conservative movement includes some bad apples, a not-insignificant minority who look at political events down south not with shock, but admiration. They view Trump’s insurgency – now a literal insurgency – as a potential roadmap for politics in Canada.

And if that weren’t headache enough, O’Toole’s movement also includes some whose social views run retrograde to settled Canadian public opinion. These are the people who still use pejorative words for gays and look at religious minorities, Muslims in particular, with a deep skepticism, if not outright hostility.

And suggesting the Cons need a political enema before they drown in their own excrement.

The looming election demands moral clarity. O’Toole must clearly state the arsonists who torch societal norms that bind our communities aren’t welcome in his party, because unleashing bitterness, anger and intolerance is an uncontrollable and ultimately destructive path, not a route to a better future.

Nobody can disagree with those fine words, but MacDougall has one big problem. If O'Toole is going to expel the Trumpists he would have to expel HIMSELF.

For he is the grubby Rebel loving Trumpist stooge who would dismember this country and its values for crass political purposes... 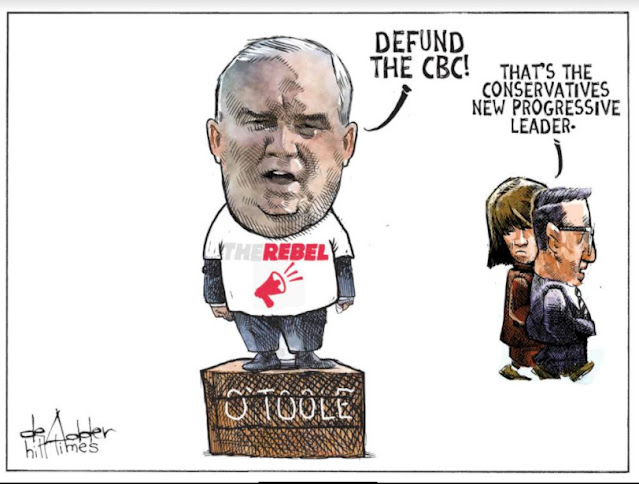 But luckily for us can't pose as a moderate any longer.

For the Cons are now the Trump Party.

And nobody who loves this country should ever vote for them again...

I have some complicate admiration for the buckskin warrior. Its good to see his colours on the dark side warrior.

So the tool is upset to be compared to Trump. All together now, awwww. Time for an inflatable O'Trump baby, Simon. Anyone paying even scant attention to his words and actions since his inauguration as RetrumpliCon leader could easily see how the Cons mimic their inbred southern cousins. In fact, it all started with the divider in chief himself, Herr Harper, who was Trumpy before even Trump became Trumpy. The examples are plentiful but I will list just a few.
Embellishment. Trump repeatedly saying he's a successful businessman in spite of countless bankruptcies and failed business ventures.
The tool giving the impression he was a fighter pilot. He was not. Leading us to believe his father was a middle class, frontline autoworker when in fact he was a high paid manager. Let's not forget Fibber McScheer fraudulently presenting himself as an insurance broker. He was not.
Lies. Though Trump would hold the world record for lies while in office, our Cons most certainly have that market covered up here.
Stoking hatred and division. Besides golf, Trump's favorite pastimes.
What really stands out for me and what I find most disturbing was the tool's Ryerson spiel. His attempt to delegitimize the cultural genocide that was the residential schools was bad enough, his attempt to poison the young conservative minds was equally repugnant. Calling Liberals dumb, radical lefties is as Trumpy as you can get as well as the Trumpy non-apology. It's a clear example that it is he who is radicalized and it is he who is hoping to radicalize his flock to become the same mouth foaming terrorists who invaded the capitol. He doesn't see Liberals as political opponents. He looks at them and their supporters with utter contempt and hatred as any would be Trumpy would.
If there were a questionnaire to determine if you're Trumpy or not, the tool and most of his party would check off most if not all of the boxes that prove without a doubt that you're Trumpy. Just as Trump is about to mercifully slink off into the sunset of loss, indictments and guilty convictions, our Trumpy Cons are barreling towards the same self destructive path.
https://www.youtube.com/watch?v=l482T0yNkeo
JD

MacDougall is, as usual, full of it. His own disclosure at the end of his articles indicates he's the "former" fart catcher for Harper. How can O'Foole expel the Trumpists when Harper won't let him and there's zero possibility of expelling Harper? Canadians need to expel the failing loser CRAP coalition and flush them down the electoral toilet. Drain the swamp and send them all down the sewer pipes to the leper colony at Mar-a-Lardo where they belong. Good riddance to bad rubbish.

I am still gobsmacked that little Oakly Annie has been named the hardest working MP. What do they include her time at the shooting range?

Hi JD....O’Toole has been pandering to the Trumpists in his party from the day he became leader. But I agree with you his speech to the Ryerson Cons was particularly offensive and revealing. He really is a slimy character, and you’re right he’s leading his Trump Party to disaster. I keep thinking whether the Cons could have chosen a better leader, but when I look at the list of leadership candidates I don’t think any of them were any good. The Harper Party has become the Trump Party and it is as you say, on the Highway to Hell...

Hi Jackie....What amuses me is how MacDougall went from trying to hype O’Toole’s new/nouveau party only to end up screaming that the Trumpists are killing the Cons. I know the Cons are desperate, and who can blame them? They took a wrong far right turn, they were seduced by Trump’s apparent success and now as JD says, they are on the Highway to Hell. Excellent....

Hi Steve....I don’t understand it either. I can only presume that thanks to a vote split between other hopefully classier candidates, she squeezed through. It’s simply appalling and says so much about the debased Con media, but it is a good lesson for us all. In the next election don’t split the vote, or O’Toole and his Trump Party could end up in power...

At first Trump used deep state conspiracies to hide his corruption,in the end embracing the election conspiracies seduced him into inciting lawless mobs. Instead of setting up the next great scam it was a road to martyrdom. What happens next. Will the Trumpists abandon him and crawl back into the conspiracy riddled swamp or will they embrace him as living proof of deep state power? Will they insist that the Tool, Sloan, Pecker Pierre join martyrdom to prove they are not part of the Communist 5G Trudeau mind control conspiracy. Its a difficult path to follow, somehow it seems it would be so much simpler if the Cons just published a platform detailing how they were going to make Canadian lives better.

Hi RT...from what I can determine from reading what the MAGA cult members are saying to each other, Trump is still their living God. One I read wondered why Melania made her farewell address today "when Trump isn't going anywhere!!!!" And many of the others were equally deranged and making veiled threats to change the situation by the force of arms. Maybe without Trump around this madness will subside, but if it doesn't we're all in trouble...