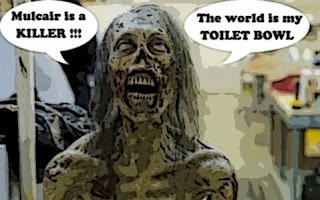 Oh. My. Zombie. I'm afraid that Rob Anders is entering the final stages of his earthly degradation.

Just a few days ago that grotesque Con was accusing Tom Mulcair of killing Jack Layton.

Now he's going after the human rights of transgendered Canadians.

Anders wants to stop Bill C279, a private member's bill that would amend the Canadian Human Rights Act and hate crime section of the Criminal Code to include "gender identity" and "gender expression" as grounds for discrimination. He says the bill's goal is to give transgendered men access to women's washrooms, which has led it to be nicknamed the "bathroom bill" proposal.

Because he is Rob Anders, he is a cowardly bully bigot, he is a Con.

And he just can't keep his head out of the toilet... 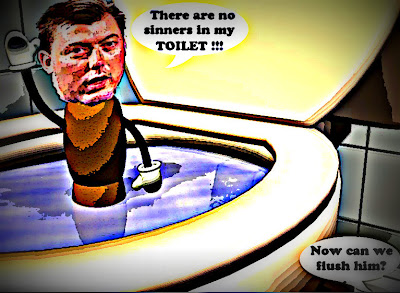 When the Reform Party is climbing out of that toilet, like a rat out of a sewer.

When another Con rose up like a zombie and went running staggering after Canadian women.

A second abortion-related motion proposed by a backbench Conservative MP could trigger a new debate about the parameters of a woman’s right to choose in Canada.

Jason Kenney has been flapping around like a bat in heat trying to get gay Canadians to bomb Iran.  So The Messiah can return sooner to punish them for not being as chaste as he is.

Mr Whip and Chains Vic Toews is trying to turn our prisons into Christian houses of worship.

While Lord Harper himself, who recently shunned the U.N. in favour of receiving some tin-pot award from a weird religious organization, is said to be unable to control them.

He remains respected for leading the party into majority government but he is not loved and, crucially, he is no longer feared.

A number of MPs I spoke to argue they should now be trusted to act more independently, even if they use that freedom to voice whatever offensive and unlikely conspiracy theory comes into their heads. 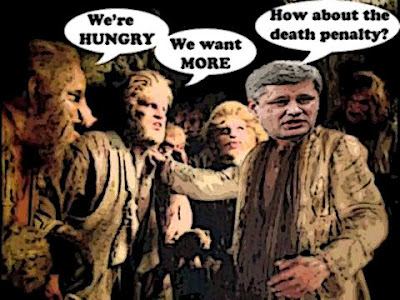 Which is scary eh? Because who knows what those ReformCon monsters and their rabid base might demand? Or what Great Ugly Leader might give them.

For when he eliminated subsidies for political parties, to try to destroy the Liberals, he also hurt his own party. So now he needs them and their grubby dollars more than EVER.

But of course all of this is also EXCELLENT. For we will use that syphilitic strain to destroy him and his Cons. Oh boy will we ever.

Yup. Don't flush that ghastly hatemonger Anders down the toilet quite yet. For he can be a VERY useful bigot. 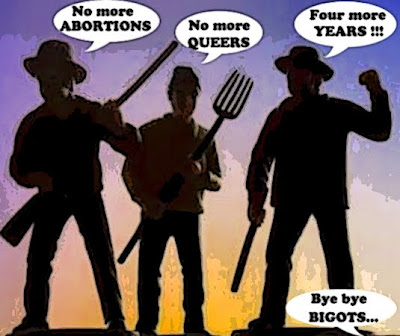 Actually the CPC doesn't need public fund. Unlike the welfare parties, Liberals and NDP, the Tories actually have a base that put their money where their mouths are. You know those people you mock are farmers? Think you can feed yourself? I say starve the cities! Starve the left, let them die in the streets and see if anyone cares. Your time is over, you have lost.

One guy has gun there in your picture? A armed rightwinger with a cause. Does that make lefties pee their pants? Come on, tell us, you know it does.

Most of the farmers (and fishermen) I know despise the Conservatives and can't wait to vote against them. Try again, dickwad.

Dairy farmers actually. Lobster fishermen, and dairy farmers. And they almost to a man (and woman) will not vote for Harper again. People like YOU help facilitate that feeling. Thank you. Keep up the good work.

hi anonymous....What ???!!!! The Cons don't need the dough? That's not what my friend who is on their mailing list tells me. He says they are ALWAYS begging for money. So if they don't need it, it must be some kind of scam. Golly. Thanks a lot eh? I'll be on passing your comment to my friends at the Fraud Squad for further investigation. And BTW stop trying to make it sound like farmers are on your side, because all the farmers I know think Harper is a creep...

hi anonymous...honestly you people are the limit, as crazy as they come. How many times have I got to tell you your rancid gang of bigots don't scare me one bit. They only thing I fear is that if I ever saw one running down the street in his diapers I might die laughing. Muahahahaha...

hi Steve...thanks for standing up to poor old anonymous. I wanted to tell him that when I was a boy I had more sheep shit on my booties than he will ever have. But I feared that would only excite him further. Keep up the good work !!! ;)

Thanks for the post Simon,,Gee wizardry, those Cons are getting very angry, that`s funny..I think your Con friends will really enjoy this one here..


And for good measure, let`s talk about the shooting star, Justin Thunderbolt Trudeau..You Con friends will be peeing their pants over this one..

Ever seen a falling star? It streaks quickly across the sky in a brilliant fashion then is gone for good. That's Justin in a nutshell.