The Day the Cons Turned Parliament into a Farce 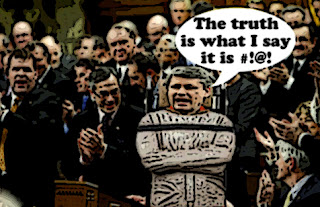 If anyone still thinks we have a Parliament, rather than a Con circus, what happened today in Question Period should disabuse them of that lunatic notion.

For you had to see it to believe it eh?

Stephen Harper rambling on like a maniac about how his carbon tax wasn't a carbon tax. Because he says it wasn't. Making a complete fool out of himself.

But still getting one standing ovation after the other from his squealing minions. It was frightening, it was madness, it was an absolute farce.

What were these men and women cheering? It was certainly not the first part of the sentence: that Mr. Harper once sought to establish a price on carbon runs directly counter to everything these men and women have been saying of late. And it was certainly not the sentence in its entirety: no, taken as a complete sentence, this exposes everything they’ve been saying to be completely ridiculous.

And surely now no sane person can deny that Great Hannibal Leader is making a mockery out of our democracy.

The Conservatives howled. Mr. Harper laughed and held aloft the NDP’s 2011 platform. As if he and his government hadn’t already decided that the public record was now entirely irrelevant.

So here was the farce writ large. Here was the farce laid out before the public and celebrated and cheered by the actors who have been bringing it to life each day for the last few weeks. It is, for sure, an astounding spectacle. Hopefully you enjoy it, because it is being performed at your expense.

Even as he prepares to table another Trojan Horse budget to degrade its bloody remains further.

And surely the only questions all progressive Canadians must answer are: how do we stop this Con regime from debasing our parliament with their Big Lies? How do we stop them from destroying our country? And above all, how do we make sure we defeat them in the next election?

For Canada can't stand much more of this of this assault on decency and reason.

You know, In this iPolitics article Colin Horgan quotes Guy Debord, the French Marxist theorist, who believed that Capitalists try to turn everything including politics into spectacle to mask their degradation of human life.

Spectacular discourse, Debord said, “obviously silences anything it finds inconvenient. It isolates all it shows from its context, its past, its intentions and its consequences. It is thus completely illogical. Since no one may contradict it, it has the right to contradict itself, to correct its own past.”

But when I see Stephen Harper and his fawning followers turning Parliament into a fascist circus, when I see them using the Big Lie over and over again, when I see them   whooping it up as they rewrite history. When I see a Prime Minister who thinks the truth is what he says it is.

I think of an even darker place.

I think of Orwell. 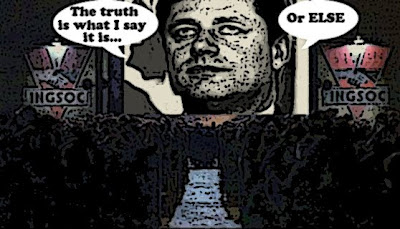 And then I wonder whether enough Canadians understand into what crazy place Stephen Harper would take us. I wonder whether they can see the forest for the trees, the truth for the spectacle.

And if they do, what are they prepared to do about it?

For surely silence is no longer an option. Insanity is INSANITY.

No. Most Canadians do not see it. The sky still looks blue to them. We have all been conditioned to believe that our democracy is "the politicians" who are ALL liars and crooks and the whole thing is a joke.

We've also been trained to believe that we can achieve nothing politically. The system that grinds us down is the only option. It is the best of a bad lot.

Thanks for keeping your eye on this Simon.

What can we do? Write. Go door-to-door. Find a way to connect with decent fellow citizens and isolate the gibbering cretins. Go massive. Go full-out. Find a vulnerability and attack it while demanding something specific that can then be held up as a genuine victory.

If Harper is smart enough to introduce a Carbon Tax, I am all for it.
BTW I know you love bikes, maybe this one will bring Euro levels of biking to Montreal.

No normal decent person with morals or ethics, would ever support a monster such as Harper. He is pure evil, and needs a mental evaluation. Harper is the great deceiver, of our times.

Harper's Cons are a complete disgrace and an insult to Canada and Canadians. As little as 2 years ago the CONS were touting the same goddamn cap and trade program as the NDP is now! They even sent Jim Prentice out to Alberta to convince that province to sign on! CONS ran cap and trade against Dion's carbon tax idea - just like the NDP did! Now these lying douchebags frame the NDP as supporting a 'carbon tax' (not true, the NDP platform is still for cap and trade) but since that is the SAME THING the douchebag CONS not long ago supported themselves, they HAVE TO LIE THEIR ASSES OFF ABOUT IT and repeat ad nauseum the NDP is for a 'carbon tax.' This lie of course plays right up to the doorsteps of their mud fucken dumb stupid constituency who wouldn't know the difference between the two if it bit their fucken nose off. These CON douchebags are pitching to their ignorant base that a carbon tax and a cap and trade policy are the same thing (they aren't) because they know these morons wouldn't know the difference anyway. Which is a farce considering while the CONS were proposing cap and trade in 2008, they were loudly opposing Dion’s proposal for a carbon tax. Then, they didn't think they were the SAME. NOW they do. Ultimately though the real problem is the CONS are deliberately trying to mislead and lie to the people of Canada. AGAIN. And yet 30% of us voted for these douchebags. They really did. No kidding. How fucken STUPID do you have to be?

Harper is pure evil? Gee, standards are getting pretty low these days. When he starts putting people in camps or gassing them, please give me call.

No more stupid than those who fell for a store-bought smile and stolen Hallmark Card sayings.....guess who I am talking about.....come on it isn't tough.....of course neither was he.

hi thwap...yes it's true, the Cons are always trying to give the impression that all politicians are the same. It covers up their crimes, and makes people not want to vote, and that's just fine with them. My humble little blog is my way of telling them they're wrong. I never miss an opportunity at work or in my neighbourhood to tell people why the Cons should be tossed out. It's a bit of a wasted effort in my neighbourhood where just about everybody supports the NDP. But in the next election I'm going to join a campaign to steal a riding from the Cons. As I've said before, I'd much rather write and draw and make videos about other things. But until the Cons are vanquished politics it will be... ;)

hi Steve...a carbon tax is the best way to try to wean our economy and ourselves off the black stuff before it runs out, and encourage the green industries of the future. Harper is smart enough to know that but too Big Oil to do the right thing.
As for that bike, I think it's really neat, and he definitely should go ahead, because I find that even the excellent Bixi bikes are too expensive to use. Not that I would ever use one eh? For me a bike is like a horse, something you form more than a casual relationship with. And besides when I look at that cardboard bike, and at those Bixi bikes,I think I'll keep my awesome Euro Lightning (old blue Peugeot) ;)

hi anonymous...well he certainly is the Great Deceiver. But remember he only had to deceive very few Canadians outside his rabid base to win the election, because the opposition is divided.
However, think of it on the bright side. If those few were so stupid they would vote for the Cons, it shouldn't take more than a bag of doggie treats to win them back... :)