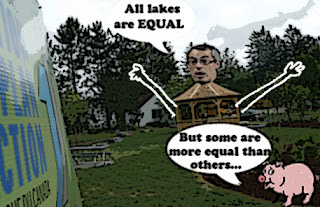 Good Lordy...I mean good lardy. You can't trust those Cons as far as you can spit, and they can squeal.

For they will strip most of our lakes, rivers, and creeks of any environmental protection.

Just not the ones in their ridings.

While revisions to the Navigable Waters Protection Act has stripped federal oversight from thousands of Canadian waterways, 90 per cent of the lakes that will still be designated as protected are in Tory territory, a Citizen analysis shows.

And wouldn't you know it eh? It just so happens that a large number of those lucky lakes are in Tony Clement's riding:

The list of lakes includes those surrounded by wealthy cottagers north of Toronto, in the Muskoka district of the riding held by Treasury Board President Tony Clement.

In Clement’s riding of Parry Sound–Muskoka, for example, a dozen lakes retain the protection that government has lifted from thousands of other bodies of water across the country.

Because you know, building a crummy gazebo in the middle of nowhere with Porky Action Plan dough won't buy you many votes in this neighbourhood...

Empty lots on Lake Rosseau and its equally affluent neighbours, Lake Muskoka and Joseph Lake, start around $1 million. “Cottages” on their winding shores — typically luxury homes — routinely sell for between $2.5 million and $5 million.

And the last thing Tony "Coolio" Clement needs is angry Hollywood stars making him look like a nerd again... 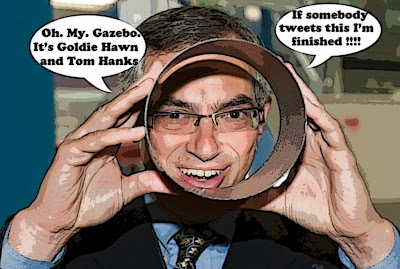 But then, according to the Con Ministry of Propaganda and Disinformation, Tony had nothing to do with it. It's just a coincidence. The government isn't stripping away environmental protections, it's just cutting red tape.

Or as the Con Transport Minister Denis "Dumbo" Lebel attempted to claim in the Commons today, it's about science and "navigation."

That's why they're putting it in Jimbo Flaherty's new Trojan Horse budget.

And for more information please contact the Canadian Construction Association:

Jean Crowder stood and wondered why various waterways in British Columbia were no longer to be protected. What of the Cowichan? The Campbell? And the Bella Coola? Mr. Lebel stood and referred her to the kind words of the Canadian Construction Association. “We want to help the country develop projects not for small, small rivers or small places where we do not have to consider the water,” he attempted to explain.

Or in my case run down to the beach, light a huge bonfire, and dance around my kayak, while renewing my vows to defeat those shameless Cons. Who are not only turning our parliament into a farce; Orwell or Kafka as re-imagined by the Three Stooges.

They are also destroying our beautiful country.

For when the Cons say there are only a handful of waterways worth protecting. 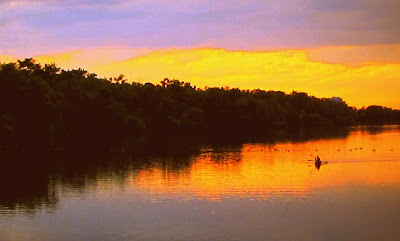 How could anyone believe them ?

Until the day we save our Canada.

Until the day we defeat them...

I just finished a discussion with my partner that we in BC provided the votes that brought on this sham of a majority. So, when the Kits Coast Guard shuts down, the pipeline rams through harper and redford's swollen egos, who really provided the back drop? BC of course and here in the interior, a frozen piece of fecal matter in a blue suit could win an election.

Tony Gazebo profits from these Connie crimes, Simon, as these horrendous Conmen deregulate water protections for Canadians in OTHER non Con man other ridings all over Canada. What a disgrace these Cons are. And have you watched the HoC lately? What a FUCKING FARCE. The Con men have turned Parliament into a circus freakshow as they do NOTHING other than make blanket BULLSHIT statements about the 'carbon tax' the NDP supposedly plans (they don't, their platform is cap and trade) - the SAME cap and trade the Con swindlers THEMSELVES pushed in favour FOR against Dion's carbon tax proposal in 2008. The Con men even sent Jim Prentice as Environment Minister to Oilberta in 2009 to get that province to sign on to ...CAP AND TRADE! The SAME THING the NDP is proposing, NOW. So the Con men LIE in Parliament EVERY DAY OVER AND OVER making farcical statements about a fictitious NDP 'carbon tax' because they can't say they disapprove of something they not long ago PROPOSED TOO! And THAT BIG LIE is their pat answer to EVERY QUESTION they get asked in there! Except for when they aren't avoiding answers to accuse the NDP of stealing union dollars illegally, when what REALLY happened was the unions paid for ad time during the NDP convention that the party was unaware of! AND paid the fine without hesitation while the CRIMINAL CONS use every crass roadblock under the sun to obstruct the robo call investigation! And the idiot Speaker ALLOWS that little lying union bashing WEASEL Pierre Poilievre to stand there and lie his ass off DAY AFTER DAY! That guy is the biggest Con asshat going these days! But what else can you expect to come from the beak of a twerp that was Sun windbag Ezra Levant's one time press secretary, other than pure, unadulterated streams of BULLSHIT? There must be something horribly AWRY in our universe when a university dropout with zero professional experience or qualifications like puny Pierre Poilievre gets to be the HoC standup comedian EVERY DAY. And that's not even the half of it when it comes to that mouthy little prick's antics over the years. What were the voters of Napean Carlton THINKING when they voted for this petulant little grease ball?

We all know Harper cheated to win the election, with his robo-call election fraud. He has cheated his way out of the Etobicoke election dispute. Harper stalled the investigation, until he was able to install his new Conservative judges. Harper was terrified, he would lose his majority, he cheated so hard to get.

Canadians also know Harper is selling Canada out to Red China. Once Harper signs over the entire tar pits to Red China, there will be no more Canadians hired. The people of Alberta don't get it. China told Harper. They will build the Enbridge pipeline, very cheaply and very quickly. Rumor has it, China will own the pipeline. The people of Alberta don't get that either. Who in the hell do they think will be hired?? Canadians or cheap Chinese labor. All the company's will be hiring cheap Chinese labor. Who in the hell has Premier Redford hired to build the other pipeline?? American war veterans, that's who. The oil gets refined very cheaply in China. Red China will make a hefty profit, off Harper's stupidity and treason. Russia signed a deal with China, they will give China all the oil they want. China now leads in oil sales. Oil will be sold by the Chinese yaun, instead of the dollar.

Harper is an, evil Traitor to Canada. He belongs in prison, for High Treason. Elizabeth May was the only one who, spoke against Harper's Treason. All the other members of the opposition went, duh and said squat. They are all damned well in on it, other wise, Harper would be exiled to Communist China or in prison for High Treason.

The sell out to Red China, also happened to BC. Campbell thieved and sold BC's resources to Red China too. Campbell worked hand in hand with Traitor Harper. They signed dirty sneak deals behind our backs. Communist China is bringing 2000 miners, to work BC mines. Campbell set that up long ago. We knew China was sending their people to school to learn English, to work our BC mines.

However, no-one listened or cared, what the BC people were saying.

The only way to get rid of Red China, is for BC to get the hell out, of Harper's Communist Canada. However, provinces won't see that either. This country is no longer Canada anymore anyway.

Paving the way to destroy the BC waterways with the pipeline, another gift that just keeps giving. Let's hope enough people are awake for the next election to vote this circus out of town.

hi bcwaterboy...I wouldn't blame BC alone, for the battle was also lost in the suburbs of Toronto. And only Quebec can hold its head high for crushing the Cons and reducing them to five seats. But I'm hoping that the pipeline that they will try to ram through will get people in BC aroused, and that they will be the ones who get to finish the Cons off. As for Ontario, just leave it to me... ;)

hi Hugh...yes it is outrageous isn't it? I have no problem protecting those Muskoka lakes, because they are very beautiful, if you can ignore all the super rich Americans who own it. But what about all those other lakes in Canada? I mean really, who does Denis Lebel think he is? He's a member of the Bloc Quebecois for eight years, and now he's turning his back on the province? The whole thing is a grim farce...

hi Wazz...I only watch Question Period when I can these days out of a sense of duty. Because it is truly a depressing spectacle. The Cons are making a mockery out of our democracy, and they think that's FUNNY. As for Pierre Poilievre...I have always portrayed him as a dick head on wheels, and nothing he could do or say will change that opinion...

hi meadowlark... being from Quebec I can understand how people in BC might consider leaving Canada. And who knows what might happen in the future. But right now we need both Quebec and BC to join forces to defeat the Cons. Rather than have them force us to leave, I'd rather force them to leave, preferably on a burro backwards... ;)

hi Max...you're right, this latest move by the Cons is just the latest in a series of measures designed to give Big Oil carte blanche to exploit our resources, without worrying about the environment, or other trivial matters. The way they try to conceal their intentions, when they are so obvious, only makes it more grotesque...