The NDP Attack Ad and the Con Zombies

I'm not quite sure what to think about this latest attack ad from the NDP.

I suppose I should be grateful that somebody put out a video calling the Cons Lying Liars. I'm sure that somewhere out there, some people who get their news only from YouTube, must be saying "Who knew eh?"

And it certainly was sneaky to put out an attack ad that only quotes some scribblers from the MSM. So the NDP can say we didn't bad mouth the Cons, Andrew Coyne did.

But I gotta say that even for those who can still read, there was a LOT of text in that video. And unless you follow politics closely, you'd have to read the Globe and Mail to get the full context.

And in the internet age who has time to do that eh? 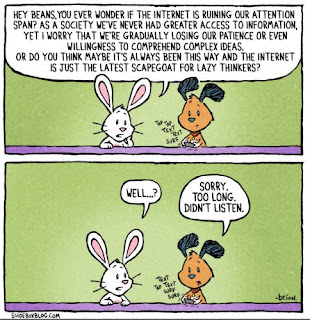 Or the attention span.

But the worst thing about that video, in my humble opinion, was that there was only ONE picture in it... 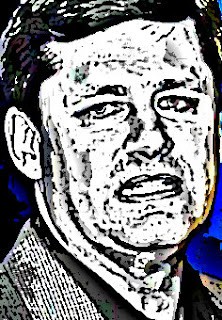 And although it's one of my absolutely FAVE pictures of Great Ugly Leader, you get no idea of the horror him and his Cons are inflicting on this country and its democracy.

Aren't attack videos in this day and age all about using  pictures to create a bad IMPRESSION?

Because even this new video from the Heart and Stroke Foundation gives me a better impression of what it's like to live in Harperland...

And it's message is definitely clearer, I think.

Although I hate the ending. Because the Con zombies are definitely NOT going to win eat the next election.

And when I think about what those monsters are doing to Canada right now. And how they're spending millions of dollars promoting themselves, with OUR money.

The Conservative government has approved tens of millions of dollars in "economic action plan" ads this year even as it cites fiscal restraint to cut programs such as scientific research and environmental monitoring.

In all, the federal cabinet has already approved more than $64 million in ad spending for 2012-13 — seemingly well on its way to matching the $83.3 million they spent in 2010-11, the last year for which complete numbers are available.

Even as they prepare to cut $60 million from the budget of the Canadian Food Inspection Agency.

Because OUR lives are nothing compared to Great Butcher Leader's insatiable desire to kill government... 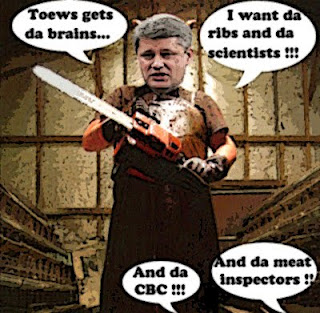 When I think about what they are planning to put into their new Trojan Horse budget, which is going to be even bigger than the last one. And what might happen if the economy goes south, and Stephen Harper decides to crush all opposition to his pipeline dreams, by whatever means necessary.

When I think about what's happening, and how so many Canadians are still sleeping, and nobody seems able to wake them up, and how the portrayal of the Cons hasn't kept up with their crimes against Canada.

When I think of all of the above, I gotta say this eh?

The next time the NDP does an attack ad they should probably drop the pretty in orange stuff, and just hit the Cons where it hurts.

Screw the fancy words, throw the kitchen sink at them. Start framing them now.

Use video to create an impression. Until it blends with their other vices, and runs down their faces like pig slop.

The lower we can portray them.

The easier we will destroy them...

Bet they will win the next election.....come on Simon you know they will. The NDP don't stand a chance. If they couldn't do it with Jack, what hope have they with Tom? Canada is a better place, to bad you can't see that.

Simon, have you checked out the Gish Gallop technique?I post as anonymous because I don't know how to do anything else.

Thanks Simon. I think that Jack positioned the NDP as the official opposition, to show Canadians, that yes, we can be the govt - Anon, just doesn't get that there are steps to "good government", and the first is to show you can govern. That requires being in the Position of government in waiting.
And Tom, in my view is doing a super job. And yeah, I found this attack ad confusing. Don't know who made it but I would like to go back to the company who created our election ads. They understand the NDP.

Canada is a cesspool of corruption. Becoming worse everyday. If provinces have a lick of sense, they would get the hell out of Harper's Canada. Our options are, being sold out to Red China, or to the U.S. China already owns, huge chunks of the tar sands, and all of the jobs to boot.

Premier Redford is bringing U.S. war vets, to build the pipeline out of Alberta. For all of the U.S. blatherings and delaying the Key Stone pipeline. The U.S. was manufacturing the pipes all along. There was never a case, that the Key Stone wouldn't be built, what-so-ever. Obama lied.

Read: Harper gives a speech in New York, at the Council of Foreign Relations. This was Sept 25/2007.

I don't want us to be sold out, to neither Red China, nor the U.S.

Of course you think he is doing a super job, you support the NDP. The real question is if the rest of Canada thinks so in 2015. My money is still on Harper because frankly between Muclair and Trudeau they are going to split the leftwing vote. Fine by me.

So Canada should just break-up? If the NDP gets in, do the same rules apply? Can a NDP government be crippled and driven-out too? Fair is fair, right?

No fear. The premier of Quebec switched horses. She is now going to work with Harper, instead of kicking his butt.

McGuinty is going to work for Harper as well.

The BC liberals have worked for Harper, for quite some years.

I think its funny (and a bit sad too) that everyone who is unhappy with their provincial leader just equates them with Harper. If there is some conspiracy between the Ontario and BC liberals, the Quebec PQ and Alberta's Redford I'd love to hear it. They certainly seem an unlikely group to me.

The Liberal Party of BC is a self-professed coalition of centre and everything right of centre. They have bent over backwards to keep the far right in the coalition, and now our former Premier Gordon Campbell is the "Ambassador" or whatever his proper title is, appointed by Harper, to Britain? If that is not related to Harper, then I don't know what is.

The ad, "Canada deserves better", is a stroke of genius. I loved it, one of the best I've seen. I do hope whomever created it keeps right on working. Not only is it good, its entertaining. The music was perfect for the message! I enjoyed it so much I played it twice. It isn't often you find a good ad but these one was great! I think the music is what sets it up so nicely.