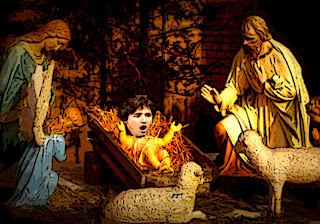 So he can console himself by reading how King Herod felt about the birth of the baby Jesus Justin.

Liberal MP Justin Trudeau launched his long-speculated Liberal party leadership bid Tuesday, aiming to establish himself as a contender in his announcement speech by hitting out at rival parties over the economy and reaching out to youth, the middle class and Quebecers.

Because can you imagine how King Harper feels seeing the Liberal Party he hates so much threatening to rise from the dead, in the hallowed glow of another Trudeau?

He must be rolling on the carpet, cursing his fate, and praying to Lord Satan ... 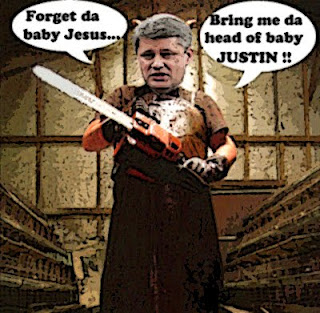 Now look, I don't think Justin is the New Messiah. I seriously question whether he can resurrect the Liberal Party in Quebec. Not with these words anyway:

"We know some Quebecers want their own country. A country that reflects our values, that protects our language and our culture, that respects our identity … My friends, I want to build a country too. A country worthy of my dreams. Of your dreams. But for me, that country reaches from the Atlantic to the Pacific, from the Great Lakes to the grand North."

Which are the same words his dad used, and in Quebec they didn't work.

From a Quebec perspective, it seems curious that Liberals believe the spectre of Pierre Trudeau could be their salvation, when the long, slow decline of the party can be attributed to the political events he set in motion.

Not when the Cons will try to question his commitment to Canada, as some Liberals are already doing.

Not when he's up against the angry prophet Tom Mulcair, who is threatening to turn the Cons into a burning bush.

The New Democrats (35%, unchanged since June) narrowly lead the Conservatives (31%, down 2 points since June) in national vote intention. This is consistent with Environics surveys released in May and in June of this year.  The Liberals trail in third place, with the support of 20 percent of Canadians (unchanged). Nine percent support the Bloc Québécois (up 2 points) and five percent support the Green party (unchanged).

And the end result of a Trudeau candidacy could simply be to divide the progressive vote, again. And deliver us into the hands of the satanic Cons.

On the other hand I like Justin. I admire his idealism, his passion, and even his flair for the dramatic. Our drab political scene needs all the excitement it can get.

And if he can do to Harper what he did to this Con... 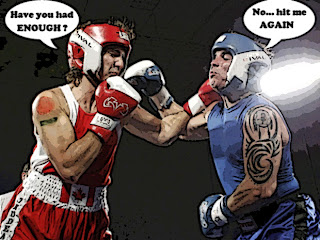 Because at this point I don't really care what party gets to plant its flag on the smouldering rubble of the Con regime. As long as SOMEBODY does.

Surprise and impress me if you can by bringing down this corrupt tyrant... 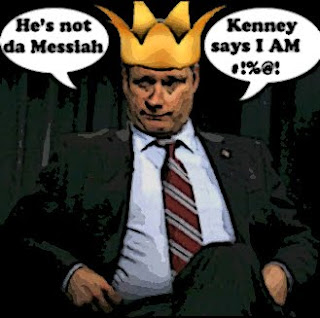 And as for King Harper...

May the thought of another Trudeau keep you awake at night.

Or give you this nightmare...

So when Justin and Tom fight it out over that same votes, what will poor progressives do? Ought to be a good show! Lol

My theory, and I'm sticking to it, is that the 'rise' of Justin Trudeau as the new Lib saviour is nothing more than an act of backroomdesperation...from everything he says, at least, why doesn't he join the NDP? After all, he makes points that the NDP has been making for years...now that these ideas are gaining traction, the Libs do what the Libs always do...act as if they invented social justice, Universal Medicare, etc etc...
Justin was too impatient to wait for his chance with the NDP, if he ever would have had one..trust might have been an issue..
And let's face it, when he mugs for the camera so shamelessly, it's obvious that his sense of entitlement would forbid him doing the hard work of waiting for a chance with the Party that will be next in line

Someone needs to save Canada from Harper. I don't give a damn, who that is. Instead of selling Canada to the U.S....Now Harper is selling us out to China.

Haha, the younger people. The ones who you are talking about are too busy smoking dope, getting laid and being lazy. A wonderful product of what the left was brought to us all!

He's a Liberal not NDP, not there is much difference as they seem to be leading each other's parties these days.

Anon is right, Trudeau is a Liberal not NDP. When the NDP was socialist, there was more distinction between the 2 parties. Pearson campaigned on universal medicare, and brought it in as Prime Minister, with the support of the NDP (who I'm not sure had it in their platform, as Douglas had another issue he was big on) so one can say the Liberals started universal medicare to Canada.