The Con Blob That Ate Canada 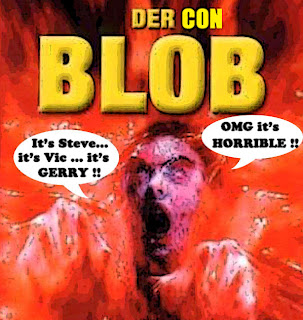 Sometimes I can't believe what the Cons have done to Canada. It's like a low budget horror movie eh?

A movie like Zombie Nightmare with Bela Lugosi Vic Toews. Where the zombies go after your brains, and your e-mails.

Or Der Con Blob, where a gelatinous mass of alien slime invades a peaceful country, eats every shred of decency in its path, and grosses us out beyond recognition.

For just look what those monstrous Cons were up to today.

Another Con Minister was accused of fiddling with his campaign expenses.

A calculation by CBC News of the travel expense invoices, the previous overspending and a portion of a flat rate charged by the airline for travel shows that Penashue's campaign overspent its limit by $17,469.06, or about 21 per cent.

He blamed an "inexperienced campaign volunteer" and made the Prime Minister look like an IDIOT.

Reginald Bowers, the "inexperienced campaign volunteer" Hann referred to, was appointed last December by the Conservative government to sit on the board of the Canada-Newfoundland Offshore Petroleum Board.

Harper made a mockery out of the notion of  ministerial responsibility..

While his Health Minister was accused of playing Angry Birds during Question Period, Gerry Ritz made a jackass out of himself. Again.

And another Con MP was caught with her hand in the cookie jar of bigotry.

Gawd. Talk about The Reform Gremlins Go To Ottawa eh?

And then of course there is this story.

Government bodies knew about a controversial experimental project in which 100 tonnes of a dust-like material was dumped into the ocean off B.C.'s north coast, the project's leader said.

The dumping created a bloom of phyto-plankton — plants at the base of the food chain that are eaten by other creatures. But the bloom grew to cover 10,000 square kilometres and was visible from space.

For what could be scarier than that?

The Con Blob is REAL and it's threatening British Columbia !!!!! 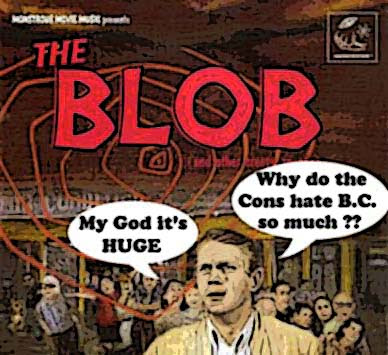 Can you believe that? The Cons would rip up their valleys, poison their lakes and rivers, smear their coast line with oily guck, turn their seas into a desert. And expect the people of that province to vote for them again.

Have you ever seen anything like it? Is that a horror show or what?

And the good news? The Cons are going to pay for all of this BIG TIME. Every day of scandal and horror only degrades their brand further.

By the time the next election arrives we should be able to put together a mighty East-West alliance that will drive them from power for a generation.

But of course, before it gets better it's probably going to get worse.

Because you know Jimbo... 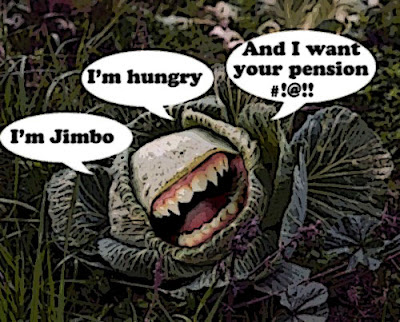 And the day the Cons came to power.

Was a day that will live in infamy.

And the day The Blob arrived...

OK. So you laugh because what's the alternative eh?

But this is still true. Organize, unite, defeat it.

They already ate a couple of your "leaders", now there is a stretch of a word. Who's next? Flaky movie-star? Mulmushy? McDickless? Come on Simon, give us taste of how you plan to take Canada back......as if it was ever yours in the first place!

On sept. 9, while stevie slime was in Russia he signed a nice little trade agreement with China. What does it for us? Not much but it does great things for the Chinese mining corportions.

Workers for the mines will be brought in from China. The companies have advised they couldn't find Canadian workers. The salaries are well below the Canadian standards. The chinese companies are offering $25 to $32 an hr. for underground work. Canadian standard salaries are almost double that. The most difficult requirement though for Canadian workers to over come is the requirement that all those applying must speak MANDARIN! Harper has regulated that foreign workers on temp. visas may be paid 15% less than Canadian workers.

This all reminds me of the days of Lord dunsmuir & mining a century ago. Miners from China were paid half of what a caucasion miner was paid. China has one of the highest injury & death rates in the world for underground mining. now these corporations get to bring this death to Canada.

the workers will be on temp. work visas so if they complain or are injuried you can rest assured they will be shipped back to China on the next jet.

If we were truly short of miners then why doesn't Immigration Canada recruit workers from all parts of the world. I am sure there will be qualified miners in Chile, South America, Russia, eastern europe, etc. To have only miners sent from China who speak Mandarin is going to creat a huge problem for Canada. Has Harper & co. forgotten the warning from CSIS? I guess so.


The Chinese mining corporatins had the gall to say it takes 5 yr. to train an underground miner, that is why they have to bring in miners from China. They don't have time to train Canadians. if I ever heard a load of horse shit that has to be it. The training lasts about a week & you are good to go. Canada knew these mines would be opening 5 to 10 yrs. ago so why weren't mining schools established to train workers? My guess, Harper & those before him knew they would be brining in foreign workers & letting Canadian workers remain unemployed.

If you thought we could go & protest & try to block the importing of miners. China has that covered also. The agreement Harper signed with China makes the canadian government responsible for any financial losses the Chinese mining companies incur. The agreement also provides for the Chinese companies to be able to continue to mine at the established rates. In other words Canada can not reduce what China takes out of the mines. Of course the mines aren't ours. They belong to China, with Chinese workers, & Chinese equipment to build & maintain them. What does Canada get out of it. I'd say a lot of pollution & thats about it.

The pipelines jobs. not for Canadians either. The City of Edmonton's Economic Development corporation has a lovely website. Target group: American war vets. They are actively recruiting American war vets to build the pipelines in alberta. I am sure they won't be stopping at the B.C. border either. the only positive thing I can say about this one is it appears they are planning to bring the Americans in as landed immigrants so they will have rights. this works for the corporations because being former military they will take orders; being Americans they will be less likely to unionize; being war vets they won't be bothered if a few bullets stray their way; being war vets from Iraq & Afghanastan they will be used to working in terrible conditions.

if we do not stop this importing of foreign labour Canadians won't hve jobs. the jobs will have been given to temporary workers who can be legally paid 15% less than Canadian workers and the initial wages are set low.

Based on the rantings of many Liberals here on Progressive Bloggers. I doubt we can work with them on a coalition of the left to unseat the Con regime.

Look at Warren Kinsella and James Curran as great examples. They will be impossible to work with. Their delusions of Liberal grandeur are far more important than the state of the nation. They relentelessly attack the NDP while endlessly praising guys like McGuinty who lately has proven to be anything but progressive.

Canada is Harper's garden of evil.

China hacked into other country's secret files. That country sold infected electronic components to other country's. U.S. missiles and other weapons, had infected components purchased from Red China. Other Nations are booting China out of their lands. Harper brought Red China, right onto Canada's soil. With Harper's utter stupidity, he has created a security risk.

Harper has already sold huge chunks of the tar pits to Red China. Harper has permitted China to bring their own people to work their tar sands. China is also allowed, to bring swarms over, to build the Enbridge pipeline. Nor, do Canadians get the refining jobs. Harper gave those to Communist China too. Harper has permitted all company's, to hire cheap Chinese labor to exploit.

Ex BC Liberal Premier Gordon Campbell, is Harper's favorite henchman. Campbell thieved our mills and shipped them to Red China, along with BC's raw logs. 131,000 BC mill people were put out of work. He sold our BC mines to China. There are 2000 Chinese coming to work those mines. Campbell thieved and sold everything of value out of BC. Harper and Campbell forced the HST onto BC. Campbell lied and cheated to win his elections too. The BC Railway wasn't for sale, was his first election lie. The HST wasn't on Campbell's radar, was his second election lie.

Both Harper and Campbell are so evil, it turns the stomach. Both of them are traitors committing High Treason, for selling us out to a Communist country. No province or Canadian has to obey a traitor.

hi anonymous...well that was classy. Let's see, where do I start? Oh yeah...my plan to take Canada back. It's amazing, it's totally awesome, it's stunning in its devastating simplicity, but since you're a Con agent I can't tell you anything. Sorry. Except that it hinges on the fact that we are more than you, and you can guess the rest.
As for Canada not being mine, all I can say is I may be unworthy, but for the sake of our poor country, better me than you...

hi e.a.f... yes it's true, Harper has jumped into bed with the Chinese capitalists he once called godless communists. He is bringing in foreign workers to drive down wages, and as if that wasn't bad enough he is also selling us out to the Europeans. The trade deal he is negotiating with them will give European companies will allow them the freedom to drive our companies out of business, and allow Big Pharma to jack up drug prices in Canada. No one has ever sold out so much of Canada so quickly. But don't worry, he will pay for it eventually...

hi anonymous...I know what you are saying. I'm afraid that we will split the vote and lose another election, before we finally accept that one party versus three or four will always have an advantage. I'm going to see how things go before beating the drum for unity again, because many progressives are extremely partisan don't want to hear of it. But you can be sure that if I see us going nowhere I will speak loudly...

hi meadowlark...I see Harper as just a pathetic tool of Big Oil. Advancing its interests, and the interests of Alberta is all he cares about. I dislike him for being such a bully, I hold him in contempt for being such a weak Canadian leader...

Weak leader? He seems to have cleaned the clocks of so many "better" thus far? What is the score anyway?

I doubt that very much. So how I think the safe bet is that after the next 2015 election, you will still be in the same position you are now. Actually, by that I mean the opposition parties, more so than yourself. But as a Tory support I must tell you that very few on our side of river are losing any sleep over what the "others" are doing quite frankly.

The fact of the matter is that the harpercons had to cheat to win their victory. There just aren't enough brain-dead motherfuckers like you to give them nation-wide support.

In the end, harper will go down, and he will be tried for his crimes and he will die in prison.

And then progressives will restore funding to the mental health system and you will get the help you so desperately need.