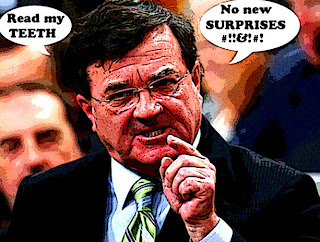 Well I've got to hand it to that old Con man Jimbo Flaherty.

When he's not screaming at the opposition, or giving the Europeans the finger, or standing on a ladder massaging the buttocks of Big Business, he's always trying to pull a fast one eh?

“There is nothing new. What is in the bill today is in the budget. If they have not read the budget, I would say to my honourable friends on the other side, ‘I do not know what you did all summer. You got paid. You had a good pension plan. So, do your work. Do your job,” Flaherty said during question period in the House of Commons on Thursday.

He just NEVER gives up. Even though he is ALWAYS caught.

The Star did read the budget and (surprise!) there are a number of items in the 443-page second budget implementation bill — another omnibus collection of proposed legislative changes called Bill C-45 — that did not get a mention in the March 29 federal budget.

And all the makeup in the world.

According to documents tabled in the House of Commons, Flaherty’s office billed taxpayers nearly $130 for Maybelline, Cover Girl and Smashbox make up to ensure Flaherty looks his best when selling his financial plans to Canadians.

Can't make him any prettier.

Or hide the ugly truth... 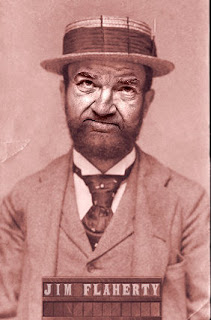 He's just another shady Con man, who lies all the time, didn't see it coming, and doesn't know what he's doing.

He's killing jobs instead of creating them. He's allowing the Dutch Disease to destroy our manufacturing sector. He won't stimulate the economy, but he will spend gazillions of dollars on Economic Action Plan ads to stimulate his party's sagging fortunes.

But then what do you expect eh? When the sinister leader of the Con gang was caught today in the House of Commons, insisting that his Porky Action Plan was legit and should be praised instead of investigated.

And that it's the NDP that is bludgeoning the economy. With an imaginary carbon tax.

“What we, of course, will not do in all of our proposals is propose tax hikes and, more specifically, a carbon tax,” Mr. Harper continued. “Our goal is not to kill jobs, our goal is to create jobs.”

For he is truly capable of ANYTHING... 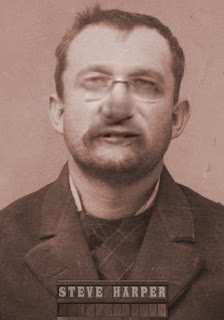 You know, I will never understand how this scummy Con gang of liars, shady flim flam men, and useless ideologues, managed to scam so many Canadians into thinking they were "money managers."

The answer must lie somewhere between Wall Street and Jonestown, beyond all understanding.

But I do know this: all Con men think they are smarter than other people, until they day they are caught. The Harper gang WILL be caught, you can be sure of that.

We will defeat them, we will put them on trial, their lies will condemn them. And I will submit this three-year-old video I made as evidence eh?

That I was never fooled by Jimbo, and I always knew it would end BADLY...

The reason they have 30% support is because at least a fifth of the population are the permanently incoherent, dismally stupid, cheerfully hypocritical, right-wing fuckheads who populate the Blogging Tories.

There's nothing you can do with those people. No way to reason with them. They're hopeless.

Then there are ignorant people who vote the way their parents voted.

Then there are the greed-heads who really run the place.

something called a 'Gish Gallop', a strategy used by conservatives in which they answer every question with such a mass of lies, half truths and straw men that it leaves the listener confused. In other world present a mountain of BS in such a energetic fashion it makes the opposition seem slow. See shelley Glover yesterday in QP.


What's all this abut pensions? In their rush to seem to be onside with covering their own butts re pensions, both the Lieberals and the NDP are falling into that old Con trap of not thinking beyond their own terms..
How is creating even less of an economic return for MPs going to encourage anyone but the very rich and very connected to run for office? Do they all forget how very difficult it is just to run, never mind support yourself when elected? To go through all that and then realize that the pension that you thought was somewhat compensatory for all that stress and expense is now gong to be even less of a 'reward' for serving your country will do nothing to , and women specifically. to run for office...
If the Cons can set things up so that it is less attractive than ever to run for office, then the only people able or willing to do so will be those who are already wealthy enough to not care; in other words, those who walk in with an agenda, that 1%...remember them? If the Cons were truly concerned they'd do something, as promised, about the Senate...they lied about that too, didn't they?

Harper really is creating jobs. Problem is, Harper's jobs are for the Chinese, and their cheap labor. Harper has already sold, huge chunks of the tar pits to Red China. They are bringing their own to workers. Harper has permitted all company's to hire cheap labor

In BC, there are 2000 Chinese coming to work BC mines. Campbell had already shipped BC mills to China, along with the raw logs. Christy Clark's job creation, are also for Red China's workers.

I think we are all fed up with Flaherty bleating about, big business sitting on all of the money. Well duh Flaherty, stop giving the giant corporations billions of our tax dollars. Stop giving them huge tax reductions.

Gee Mr. Flaherty, you too love your luxurious hotel suites, just as much as Oda did. All the Conservative Ministers do. Harper and his Conservatives, waste and thefts of our tax dollars, is obscene.

Wow your writing is really bringing out the passion in your readers.

I've never had anonymous people looking forward to rubbing it in to me... LOL

Or for that matter people that I know.

hi anonymous...well as they say, only time will tell. But if I were you I wouldn't get your hopes up. Because I'm afraid your Cons are going down. Are you so fanatical that you can't see the writing on the wall? Day after day your brand is being degraded. In fact I'm starting to get worried that your hated leader will resign before the next election, so I won't have the pleasure of seeing him defeated. Oh well, then Jason Kenney could take over, and lead the Cons, like Moses, into the deep end of Lake Ontario. And that would be good too... :)

hi thwap...OK. I'm sorry I asked eh? But you're right, I am constantly amazed at how so many Cons seem impervious to reason. I think it's a neurological question, something to do with the enlarged fear gland in their brains that studies show they have. And you're especially right about this:

Then there are the greed-heads who really run the place.

Because that's the really depressing part. So many Cons are being suckered by the rich and powerful, and they don't even know it...

You know I'm against circumcision, but removing that fear gland when they are still babies might be a really good idea... ;)

hi anonymous...thanks for this, I didn't realize this totalitarian technique had a name. But the Cons sure use it a lot, as did Romney in his first debate with Obama, with devastating effect.
As I see it we have two choices: Extricate the lies from that squirming heap of deliberate confusion. And expose them to the light of day.
Or use the Gish Gallop against the Cons. While we decide which way is best, I suggest we use both...

hi Wendi...it is of course just pure demagoguery, a shiny bauble on a tree without leaves,and as you point out it does the cause of democracy no service. Especially since Harper and his gang can leave politics, and be safely cuddled in the arms of Big Business. The biggest danger is that the Cons will then say we cut our pensions, so we can kill yours. Honestly, nobody will be safe until we run this ghastly gang out of office...

hi meadowlark...I agree with you completely, and furthermore I am personally outraged that they are spending so much money trying to make Jimbo look pretty. When EVERYBODY knows that you can't put lipstick on a Con. Not one who once called for jailing the homeless. It simply can't be done...

hi WILLY... I suppose "passion" is one word to describe it. ;)
You should see the ones I don't publish, because I'm not sure what end of the beast they come from.
Look, my position is pretty clear on this issue. I don't write to annoy ordinary Cons, but if my writing drives them KRAAAAAZY.
Then I consider that a bonus...

lets see, Flagherty with makeup sort of like that line, "lipstick on a pig". However, the pig is smarter & has more integrity than Flaherty.