Their reconstructed faces stared out at us today like two ghastly mannequins from another time. A very bad time. When gay people were routinely blackmailed and beaten up. And those who killed them often got away with murder.

I wonder who those lost boys were.... I wonder what happened to them. And why it took forty years for the police to reconstruct their faces, and try to give them a name. But most of all I wonder why now? And why the new head of the Ontario Provincial Police Julian Fantino was at the news conference this morning?

The same Julian Fantino who as Police Chief in London, Ontario was responsible for one of the worst anti-gay witchunts in Canadian history. The anti-gay terror crusade he called Project Guardian. 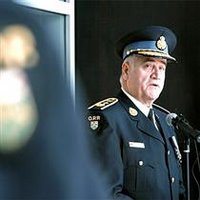 You don't think he's trying to link gays and criminality again, do you?

But I did have to laugh at what the OPP inspector said today to explain why two gay boys could just disappear. Instead of just admitting that back then the police were beating up gays and jailing them. So they probably didn't try hard enough.

“In 1967, people were hitch-hiking across the country quite a bit. Young people were not so tied to home. The Vietnam War was on and there were young American men coming to Canada to avoid the draft...."

....And a Canadian named Everett Klippert was sentenced to life in prison for the crime of being gay.

Too bad the two dead gay boys didn't live to see 1969. So they could have known what it was like not to be treated as criminals. Aren't we lucky that times have changed. Even if the hatred hasn't.

"Legalizing same-sex marriage would amount to societal approval of .... destructive behaviour. .....That teaching will bring death, physical death through sexually transmitted diseases, emotional and psychological death through dysfunctional relationships and worst of all spiritual death through loss of salvation."

"To be set free from the slavery to sexual deviance, which strips us of true freedom and binds us, is a goal for all to embrace..."

But you know if being free means living the twisted life denying inhumanly creepy crazy lives these wingnuts live. Then I think I'd rather be a slave to love...as long as after fucking our brains out we get to revolt in the end. And cut our massa's throats....

But still.....forty years after Canada decided that being gay wasn't a crime....gay murder victims are still being treated as predators and criminals who deserve to die. And we're still debating whether gay and lesbian Canadians should be allowed to fall in love and marry? What's wrong with this country?

Why couldn't our politicians just do the right thing? Like those in South Africa did today.

"When we attained our democracy, we sought to distinguish ourselves from an unjust painful past, by declaring that never again shall it be that any South African will be discriminated against on the basis of colour, creed, culture and sex...."

Too bad our politicians couldn't have done more to distinguish Canada from its unjust and painful past...

Instead of celebrating the equality rights of more than a million Canadians, they dragged their feet. They had the nerve to to call it a free vote. On our human rights. And now they're threatening to take those rights away. And encouraging the hatemongers to come after us. And most Canadians couldn't give a shit. What a small country we've become.

And then I thought of those two dead boys. Who never lived to know what it was like to be free in their own country. Instead of criminals. In Canada. Just forty years ago.

And their sad mannequin faces reminded of something else. Of how far we've come and how far we still have to go.

As well as reminding me of these guys..... 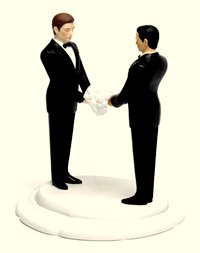 From criminals and lost boys and murder victims to cake toppers. God forgive me.

So it's the same struggle. And because we will always remember Canada's shame. And what they did to us. And all the murdered gay people.

It's not a struggle we will ever allow ourselves to lose. For me and all my brothers and sisters who are still fighting for equality today.

And now for two lost, murdered, and forgotten boys calling out for justice from a hateful time....