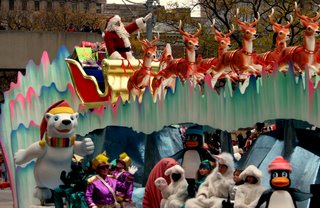 I took my little niece and nephew to the Santa Claus parade today. They loved it of course. Some things may change. The reindeer were a little too plastic for me. But Santa is Santa. And the little tykes went berzerk. Yikes!!! I had to hold one back from making a beeline for that big white bear and presenting him with his extortion list of Christmas demands!!

I wish I could feel as happy and as hopeful as those children did this afternoon. But because I'm a gay and proud Canadian, living in Stephen Harper's Canada, I can't. I'm too sad and depressed.

Even in my worse nightmares I never imagined how much damage Harper's ReformCon thugs could do to the fabric of Canada. With only a minority government.

But the damage at home can hopefully one day be repaired. What absolutely sickens me is the damage these crazy ReformCons are doing to our image abroad. Damage that will take a generation to repair. Once I was proud to be a Canadian. Now I'm embarrassed. 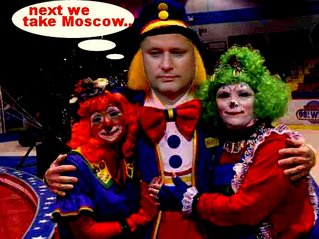 He's been going around like some kind of chickenhawk wingnut preacher, making a big fuss about human rights in other countries.
Making enemies everywhere, and making Canada look like a country of retarded rubes and aggressive little yankee stooges.. And the worst thing is he's bragging about it.

The Conservative government has introduced a gutsier, pull-no-punches style to its dealings on the international stage, Prime Minister Stephen Harper declared Sunday, suggesting the Liberals had lacked courage in the past.

“We've had very frank discussions with a wide range of leaders, including although it was not a very long discussion, a very frank discussion with President Hu of China — a distinct impression, if I may say that, that the Chinese aren't used to that from a Canadian government, but I can't speak for them,”

Wow!! Can you believe that? Posing as a toughtalking champion of human rights. While fucking with the equality rights of millions of Canadians back home.

But the worst thing is that by acting so neocon loutish and warlike dumb .... he's destroying any last chance of Canadians being able to act as true peacemakers in a world that so badly needs them. Of being able to work with both sides to help bring about an end to hostilities. Instead of just helping one side kill the other.

We've already lost so many things.... Now we've lost that proud legacy. We're not only letting the planet burn. We've thrown away one of the tools humanity had to try to stop the killing. Or rather this fat dumb pig has.

I'd laugh...Is that a beluga evening gown or a tightly stretched sausage skin? .....But it's too fucking tragic. This montrous blimp has been allowed to get away with murdering our Canadian values. And nobody has done nothing. The opposition is divided. Nobody seems to care. I must admit I sometimes feel like giving up myself. There is no passion left for anything in this country. It's all grey, boring and blah blah blah.

I feel like I don't belong. Even my friends are on my case. A gay blogger said the other day I should try anger management. As if I hadn't for eight years. So that hurt. This weekend I even thought about giving up blogging. What's the point of doing anything? If all people care about is cheap politics and making money? Nobody is listening. And the country's soul is already lost.

Maybe it's just time to return to being the other Simon I once was. On my very own desert island in my mind. Far from this dying place.
Far from anywhere.... 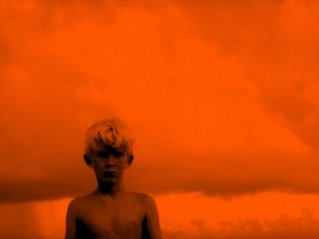 Where I used to think about a lot of things. But never said a word...Except this time my friends would be there. Especially the one who cares about me enough to know what I'm feeling and want to say. Even when I can't. The tough but gentle French guy I love more than life itself. The one who for some mysterious reason, also loves me.So this time it would be paradise....instead of a lonely hell on earth ...

But then someone sent me a comment on my last post. Someone named Rashid. And this is what that gay brother wrote:

"This article meant a lot to me, and thanks. It shows that, maybe people really do care. Maybe the world hasn't gone mad, maybe there is still love in this world... I am a gay boy who has been fighting for his life, fighting everyday against suicide. So thanks. :)

That really touched me. Gave me a real jolt. And I remembered that all I'm really fighting for is a world where gay boys like Rashid don't have to feel lonely, afraid, sad or suicidal anymore. And can find the love every human being needs. And know that it's out there. And that it will it find them . And above all so they know that me and my gay brothers care and think about them. So they're never really alone.

Never mind the fate of Canada. That's enuff for me....so I'm not giving up. And neither is Rashid. Hear that brother? If you read this trust me....you're loved . And besides you don't want to make me mad....

You know one of the truly great things about being gay and lesbian is that we reach out to each other across the barriers of race, language, culture, and religion. We could help serve as bridges between people. Bring down some barriers. Help build a more peaceful and loving world. If only they would let us. If only they didn't want to kill us. Or ruin our lives.

In the meantime..... I'm looking forward to the next big parade. And I hope Rashid will be there. Oh not the Santa Claus parade. I wouldn't wish that experience on any gay boy. I've never seen so many screaming kids in my life!!!

After all this depressing shit. And all that sadness. Isn't that worth fighting for?

Won't that day be grand!!