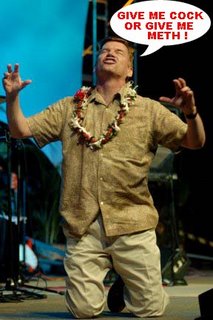 Praise the Lord!!! Pass the lube!!! Pastor Teddy, the traitor closet queen, now says all he got from the gay escort was some meth. That he didn't use. And a massage.

Hmmm.....I don't know...I want to believe in miracles. But I just have two questions. One, I can understand throwing out $200 bucks of meth once or twice. You can't have sex all the time. And never eat. But once a month for three years? Isn't that kinda... expensive?

And two. When twisted self loathing homophobe closet queens say they go to escorts to get a massage. Isn't that just closet code for getting fucked in the ass?

Because....and I don't know how to say this ....but Pastor Teddy's honey hustler, meth dealer and masseur doesn't look like a bottom to me.... 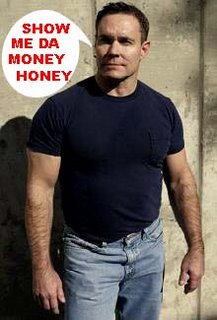 Oh Lordy....Something tells me that Pastor Teddy spent a lot of time on his knees not praying to Jesus. Just gagging and being called a bitch. And unless he cops a plea, and quickly, we're going to hear a lot more about those Big Gay " massages." And it ain't gonna be pretty...

Although....when I saw him with his wife being grilled by a tv reporter, I must admit I felt a little sorry for him. I don't like to see anyone publicly humiliated. Not even a homophobe. Remember we only hate them because they hate us. We're the love warriors.

But then I watched this video and I changed my mind....

Oh boy....talk about NOT having the last laugh.....I really do want to feel sorry for him. I mean from everything I've seen and read about him, he's not just a pathetic closet queen traitor. He's absolutely nuts.

"He called the evil forces that dominated Colorado Springs—and every other metropolitan area in the country—“Control.”

Sometimes, he says, Control would call him late on Saturday night, threatening to kill him. “Any more impertinence out of you, Ted Haggard,” he claims Control once told him, “and there will be unrelenting pandemonium in this city.”

But I can't feel sorry for him because he's not just a crazy homophobe. He is a powerful one. And his wonky wingnuts collaborate with evil right-wing governments to oppress women, gays and the poor. Chimp Bush is counting on them to shore up his sagging fortunes. And so is Stephen Harper.

"Despite their professed Christian beliefs, many theological and social conservatives have a strong survival of the fittest streak. They want a hierarchical society with heterosexual white males at the top.

Now theo-cons and socio-cons have a powerful friend at court. Ian Brodie is Prime Minister Stephen Harper's chief of staff and the intellectual arch-foe of the CCP's affirmative action to promote the rights of French Canadians, women, aboriginals, gays, immigrants and the disabled.

But don't take my word for it .......Why don't we end tonight by giving Pastor Teddy the last word. And have a British journalist ask him the Nuremberg question...

You know how those bastard homophobes love to kick us in the head when we are down ?

Have a great weekend everyone!