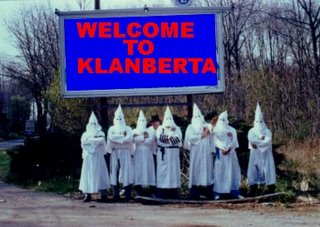 Remember how I warned you about Alberta's exploding syphilis problem?
Well I'm sorry to report tonight that my warning came too late for the many rednecks in that backward province. Now it's spread to their small brains. Welcome to Klanberta...

Can you believe it ? The U.S.-style wingnut homophobe and traitor separatist Ted Morton could actually become the Rube King of the Bigot Province. Heil Moron!!

The crazy professor from the sinister Calgary School, who along with his buddy Stephen Harper wrote the infamous firewall letter

The yankee-born right-wingnut who would privatize Canada's medicare system. The ridulous self declared Jackass Senator-In-Waiting from the Confederacy of Klanberta. The darling of the religious extremists who has promised to introduce his Final Solution to the Gay Problem. The nazi Bill 208 ....Again.

The effects of this bill, should it become law in Alberta, would be devastating for gays and lesbians.
[Bill 208], if passed, would allow employers to fire gays and let landlords evict gay tenants with impunity because they’re “exercising a belief against same-sex marriage..."

The hero of the angry old men and the mouthbreathing white trash of rural Alberta. Who would rape our Canadian values. Wage perpetual war on us. And turn their barbarous wingnut breeding ground into this kind of place. 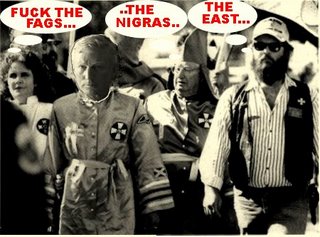 A place where gay people would be hounded like animals. A place where the message would go out. It's ok to fuck with the fags. It's ok to bully gay kids and beat them and drive them to suicide. You can attack them, put up religious tracts calling for them to be murdered. You can fire them, evict them, and they can't fight back. No gay person would be safe.Not even in their own homes. If I was a gay person living in Klanberta I'd buy a gun.

So with this horde of redneck wingnut nazis coming straight for us what do you think one of the last libby Lib bloggers left in Calgary is doing? Attacking Ted Moron and his nazi plans to wage war on Canada as we know it? No I'm afraid not. He's too busy spouting nonsense about Quebec. Along with a whole bunch of other Libby Bloggers.

And both those bloggers are usually great. So how depressing is that?

As if Quebec wasn't a nation. As if Pierre Trudeau's vision of Canada wasn't as dead and buried as the man himself. As if anybody gave a shit about whether Iggy is a piggy or not. When the country is burning.

As if those few harmless words weren't one of the most devastating body blows the separatists have ever received. As I've pointed out over and over again. As Chantal Hebert points out in today's Toronto Star:

"The expected adoption by the House of Commons of a Conservative motion recognizing that Quebecers make up a nation within a united Canada is likely to blunt one of the most potent weapons left in the sovereignist psychological arsenal.

Its adoption also makes the possibility of another referendum more remote, even if the Parti Québécois comes to power after the upcoming provincial election..."

How dumb can you be? No wonder English Canada is falling apart...like a wet paper bag. With friends like that who needs enemies?

As for me I figure that the only way Quebec really will separate one day is if these Alberta paleocons, drag Canada too far to the right. So it may eventually come down to a choice between the Quebec nation or the Redneck one. And you know where I stand on that... If anyone has to separate I say let it be Alberta.

And if Moron does become Rube King I plan to make my feelings public. With a new license plate... 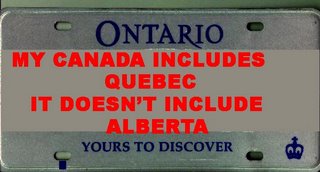 Ok ok....so it's in the development stage...and after the Quebec part I'd have to add as long as Quebecers want to. But yours to discover ....a brand new country....can you imagine how beautiful an Alberta-free Canada would be? Sure we'd be a little poorer. But there would be no more Harper. No more ReformCon party. No more having to pretend that we're interested in Alberta Alienation Disorder (AAD) No more listening to their wretched bigoted wingnut yapping.

And of course.....above all... with King Moron at the helm no more having to take them seriously. Ever again. And who can put a price on that? That's priceless.

But if we can't convince these redneck homophobes to separate. And join the United States where they belong. I think we should at least try to isolate them. Persuade them to build that big wall they're always talking about. So we don't have to look at them in their funny cowboy hats and Klan hoods. Or smell their foul bigotry. Or watch them wacking off at the thought of all that gay blood. Or sucking off the dying Bush Regime.

Or better still....you know a firewall is supposed to keep viruses out. But once one gets in and you can't kill it, you have to quarantine it. So let's quarantine Alberta. Join forces and drive these paleocons from power. So if Ted Moron ever becomes the Rube King of Alberta. And tries to fuck with our Canadian values. We can just tell him to go fuck himself. And keep them at bay that way.

You see it's not just syphilis that is contagious.

So is bigotry and ignorance...