Commander Harper and the Christian Terrorists 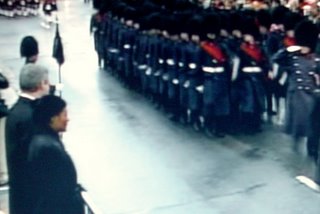 When I first saw this picture of Stephen Harper and Michaelle Jean at the Remembrance Day ceremonies in Ottawa, I got quite a shock. What the fuck was Great Leader doing up on that podium taking the salute? Was he now the Commander-in-Chief instead of her? Just like his master Chimp Bush is in Amerika? I started to panic. Was this a coup-d'etat ? And why oh why hadn't the Canadian Resistance called and warned me to go underground?

Then I realized it was only 11 am on a Saturday morning and they hadn't yet woken up.... And Great Leader was only shooting another scene for his upcoming campaign video "Commander Harper "....soon to be known as The Fat Nerd as Warrior ad.... Or just The Fatso

What an idiot I am!! I could have slapped myself...Tubby couldn't threaten anyone. It's the kind of people he worships with we've really got to worry about. The apocalyptic and homophobic Evangelicals. Some of whom are starting to sound like Christian terrorists

Christian resistance is required, suggests the report, on several fronts where government encroaches on religious freedom such as secularism, pluralism, homosexuality, abortion and euthanasia.

".......in a modern democratic state it is much more a question of various graduated responses, which may begin with a simple and entirely lawful withdrawal of co-operation with state authorities before progressing through various forms of resistance focussed on a particular area, to ultimately deliberate defiance and even perhaps revolution."

You can read more about it here.

But it sure sounds like a threat to me. Don't these freaky wingnuts understand that those kind of Christian parties have gone out of style? 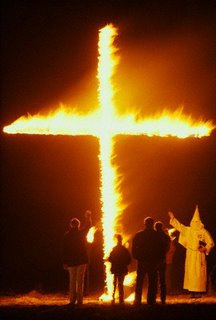 But it does serve as a warning to us all. The Harper government is crawling with these theocons. The Minister of Public Security is this guy. How secure can I feel? How safe can any gay or lesbian Canadian feel?

And then there's the redneck so-called Minister of Justice. What a joke. When he isn't attacking gays. He's attacking the Supreme Court. Talk about a sinister conspiracy. And the enemy within.

How safe can we all feel? Who is going to keep tabs on these fanatics? I think Stephen Harper needs to tell Canadians whether he's going to follow the laws of our country or the dictates of his church.

In the meantime I just want to say I'm ready for the worst.

I'm going underground the day Harper and his Theocrats get a majority.

I've even picked out my costume. 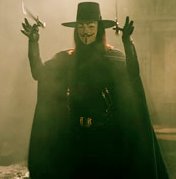 Don't you love the hat?

Religion is supposed to be about love. But it's turned into an instrument of hate.

They say it couldn't happen in Canada.

But I'm not taking any chances....

these christ-tards are falling right in to the prophecies (native), where the truth is revealed and the end of the white man's ways come about. it's called 'the quickening' or 'the time of the white eagle' and is upon us......so harpooners, have your last stab at things because you're on your way out.

the momentum they've created will hang about for a bit, but like you, myself and so many others are here, waiting, 'come and get me you fat bastard!!'.

mind you, the garlic wreath around my neck gets heavy at times :)

Man, these guys just don't give up.

It gets worse and more depressing every day. Here is a perfect example of why Peter won't be going off his anti-depressants anytime soon. I had a letter published in The Globe and Mail this past summer where I described my "visceral negative reaction" to even having to see Stephen Harper on TV. It's way beyond that now. My new word viv a vis him is sinister.

You can see my letter here

The news from Ottawa gets worse every day. This story is another fine example. Thank's to Stephen Harper it doesn't look like I'll be going off my anti-depressants anytime soon. I had a letter published in the Globe last summer, describing the "negative visceral reaction" I have whenever I see his smug, sinister smile.

You can read it here

Hi Scoutie! I luv those native prophecies a lot more than I love the wingnut ones!!! You're probably right. It's probably the last spasm of hatred before their lights go out. And humankind moves on. But it's sure going to be scary in the meantime...

Hi Too Busy ...I agree with your description of Harper as sinister. I actually believe that he is in fact fits the definition of a clinical psychopath. He may be a smart thinker but he's incapable of empathy.So he just plays chess with human lives. As for Star story it's just another example of his Banana Republican rule. What I can't understand is why the media hasn't done more to expose this Big Brother act. Or why so many Canadians just sit on their asses and just watch it happen...

Yeah, it's all to depressing. My usual (and arguably charming) Ennui is beginning to turn to despair. I have a feeling that my therapist is going to start hearing the name "Stephen Harper" in our sessions. Frequently. Starting tommorrow.