Justin Trudeau and the Night That Changed Canada Forever 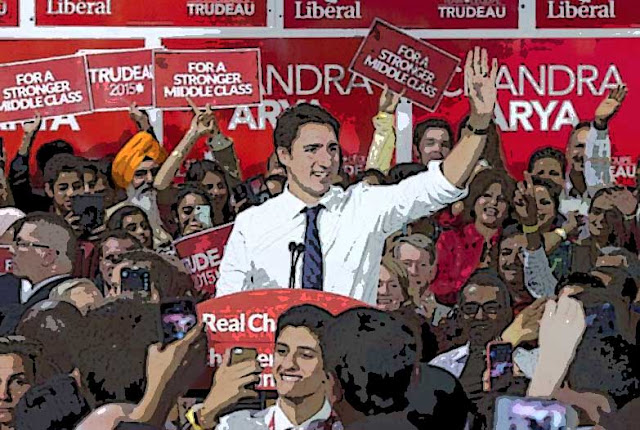 It's hard to believe, but it's now been five years since the night that changed Canada forever.

The night a decade of darkness finally ended.

The night Stephen Harper set out to destroy Justin Trudeau, the man he hated more than any other.

Only to end up flat on his face. 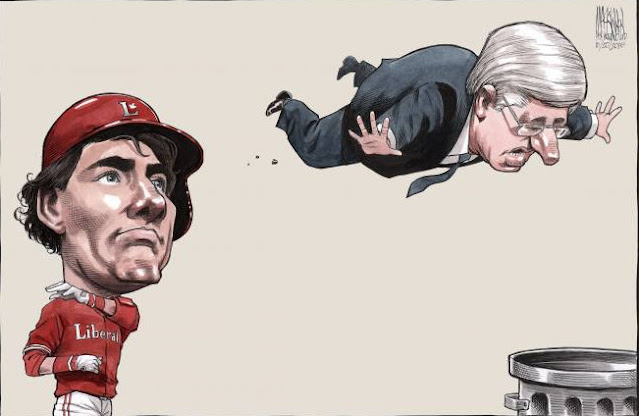 And in the garbage can of history.

For although Harper is still around, still lurking in the shadows, he will never again be the right-wing monster he once was.

Trudeau's majority was so massive it also took down some of the biggest names in his hideous Con regime.

And it made sure that Jason Kenney would never succeed Harper... 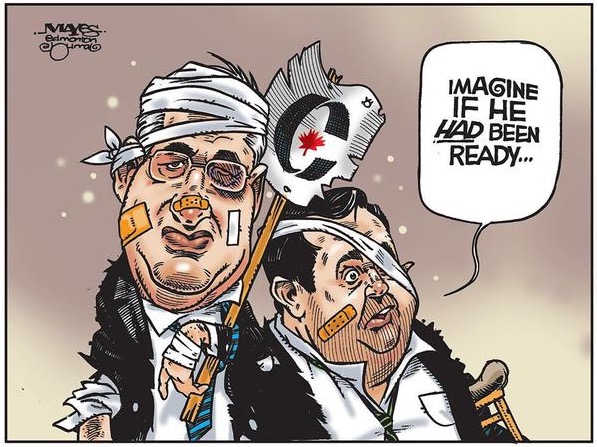 For he was also too damaged to be anything more than the grubby premier of Alberta.

But nobody was more damaged than Harper, for whom as Jeffrey Simpson pointed out, Trudeau's victory was the ultimate insult.

Losing power is bad enough; losing it to a Trudeau with a thumping majority is the ultimate political insult for Stephen Harper, who resigned on Monday night.

Everything in Mr. Harper’s political career from his early days as an assistant in Ottawa was directed at undoing or diluting as much as possible of prime minister Pierre Trudeau’s vision of government and Canada.

Now, to be crushed by Mr. Trudeau’s son Justin, someone Mr. Harper considers intellectually weak and, worse, a chip off the old man’s block, must cut the Conservative Leader to the core.

Harper recently claimed that he could have stayed on as Con leader, but no serious person believes that, for he was and still is loathed by most Canadians.

As for me, five years later my support for Trudeau remains as strong as it was when he first became prime minister... 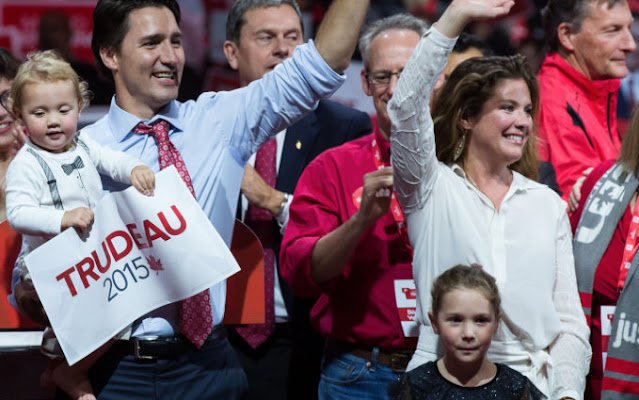 He's not perfect, and he has unfinished business, but his decency still shines through.

He restored Canada's image in the world after the long years of darkness. He made this country so much better and so much more Canadian.

No other leader could have managed the pandemic as well as he has.

And he has done more for the rights of women and LGBT Canadians, and other oppressed minorities than any other prime minister... 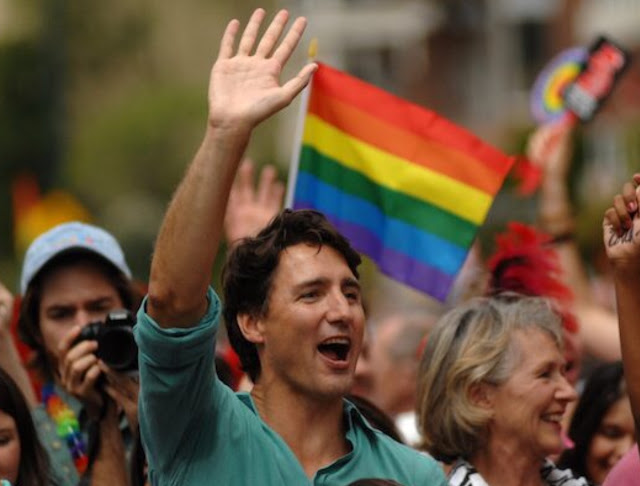 Which is the main reason the filthy Cons and other bigot scum hate him so much.

But despite the way the Con media has also tried to destroy him, he remains the country's most popular leader by far...

So if the grubby opposition wants an election.

I say go for it. The Cons and their NDP and Bloc stooges are only interested in undermining Team Canada with one fake scandal after the other, for crass political purposes.

So this country badly needs another Liberal majority, if we are ever going to defeat the pandemic.

And only the one who led us out of the darkness, can lead us to victory... 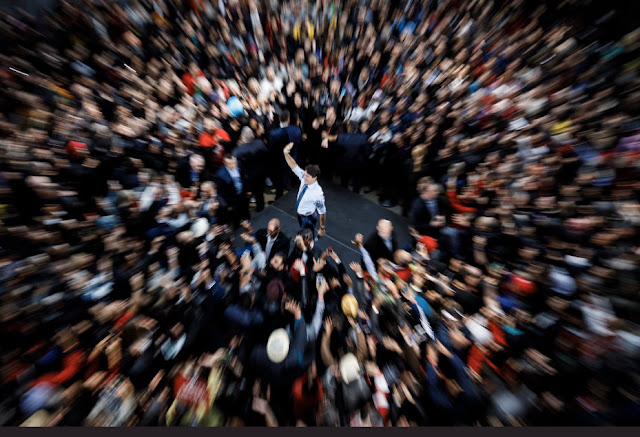 As a denizen of the wrong side of the Orange Curtain stuck in the elephant's bed, I too want to thank Canada for electing an inspirational prime minister who has been such a breath of fresh air, showing us what leadership used to, could, and damn well should, look like. And no, not just "look like" aesthetically, even though he is quite famously easy on the eyes. He's compassionate, he's intelligent, he's everything Trump is not and will never be. I miss those days of "Canalot" with the "TruBama" bromance, and can't wait to see a reset of relations when Joe and Kamala take over. Biden/Harris, Trudeau/Freeland, the best Can-Am double date. I can't even imagine a continental partnership with Trump and Harper. I shudder to even think of it.

If he wants to, because I'm sure this has taken a lot out of him, I hope he follows papa's trajectory and keeps this job for many years to come. Maybe he'll get a chance for a 1974 three-peat within the next few weeks, if Chuckles, Skippy, Tool Man and that aggro predator Blanc Cheque keep up their antics. Papa would be proud, and what a happy birthday present for him and for Xavier, the... third PM Trudeau? 🎂 🙂

Many thanks for this post, Simon. As a reminder to me and anyone else not afflicted with CONorrhea. The beast was exorcised from 24 Sussex Drive and I guess the stench was too much for the old house as she's now being rebuilt. They say the stench may never go away. Same as it probably will be once Typhoid Donnie is booted from the white house. What a great way to celebrate this glorious 5th anniversary of Harper's thorough defeat and then witnessing Trump suffer the same. All indications are that Trump will lose along with Congress and the Senate. The sweep is coming and once it happens, it may be the perfect time for JT to call a snap election and make it a North American majority of Liberals and Democrats. The energy produced from the exploding Con heads could light the city of Ottawa for years. Wouldn't that be a wonderful way to end an otherwise horrible year.
JD

The loathsome Repnucks are back at it with the anti corruption committee. Lets have an election and move these Americans back to the states.

O/T but I couldn't resist sharing this fake news story about putting people who ignore the pandemic rules into internment camps.
https://www.cbc.ca/news/politics/covid-19-internment-camps-disinformation-1.5769592
As I suggested before, I think it's a great idea to put all the anti maskers into a place where they can only infect each other. They've already attained herd stupidity so why not let them suffer the consequences of trying to achieve herd immunity? Trump's pandemic "expert" Doctor Charles Atlas will soon be unemployed so he would be free to help look after them with x-rays and such. How poetic it would be to have a quack caring for the quacks.
JD

With the exception of the Quebec centric Bloc, the Cons are the only federal party without a published political platform. Their official website reads like an ad for Coke classic or spiked Kool Aid.... Join us and experience that classic Conservative buzz your great grandfather enjoyed! Similar to a virus they are a bunch of empty vessel assholes using Canadian tax dollars to replicate by destroying their host. Truth is the only vaccine, until that day everyone should keep them at a safe distance, wear masks and wash our hands frequently.

A the battle to limit the propagation of political propaganda rages in the US, the disinformation machine finds fertile ground further north.

I say Hunter is like Chelswea or even Ben. Children of the powerful get paid.

So no election for now because the NDP chickened out. Jagmeet, lowlife partisan hypocrite, whines about Trudeau causing a "pandemic election" and then tweets a picture of himself voting in B.C.

Hopefully the Grits will get another opportunity to put this minority clusterfuck to bed, when Chuckles (coward who quit Twitter because people kept calling out his Maggie-bashing shit) introduces his motion to continue beating the WeGhazi dead horse.

Toole Man looked like a tool today and Blanc Cheque has much to answer for.

To be honest, I don't think your attitude here is helpful though... it's the other side of the coin from conservative partisans (who seem to be predominant on social media in Canada btw), a certain kind of arrogance...why wouldn't the liberals want to work with the NDP? Now I'm not saying that the country conservatives should get to do whatever they want, but the liberals should be more conciliatory towards the other parties IMO , especially NDP and greens... I mean this kind of arrogance that everything a particular party is doing must be right might lead to people in Europe voting for right-wing populists, and could maybe lead to the same in Canada (including for the cons, who are to the right of mainstream conservative parties in Europe IMO)...��