Porky Tales and the Madness of Con Canada 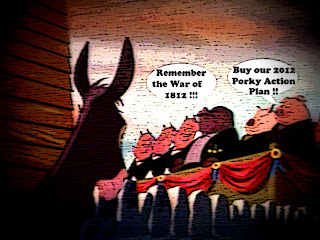 After disconnecting myself from the 24-hour news cycle for about a week, I decided to check out what Stephen Harper and his Cons had been up to in my absence.

Because as we all know, you can't take your eyes off that porky gang for a moment, in case you miss another scandal, another ethical malfunction, another democratic outrage, another court case.

Or the latest police intervention.

Fugitive Nathan Jacobson, whose ties to the federal Conservatives made him the subject of recent question period queries from opposition benches, was arrested at his home in Toronto Thursday afternoon.

In recent years, Jacobson had spent much time in the corridors of power, both in Israel and Canada, and in March a smiling Jacobson was photographed between both Prime Minister Stephen Harper and Israeli leader Benjamin Netanyahu at a reception in Ottawa. Jacobson claimed to have worked on the 2008 campaign for the Tories and was also considered a friend of cabinet ministers Jason Kenney and John Baird.

And sure enough, when I looked at the list of all the things that the Con regime had done in just ONE week, I could hardly believe my eyes. It was so long, and so horrible, and so crazy, I can only conclude they are imploding. Or going hog wild !!!!

For there was little Jimbo Flaherty, proving once again that he doesn't know what he's doing, his corporate tax give-away plan is a scam, and he can't count. 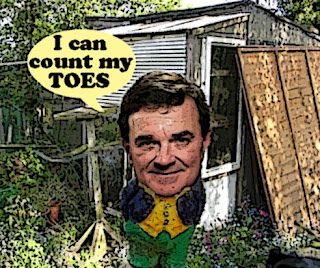 There was the wingnut Maurice Vellacott handing out Jubilee medals to religious extremists.

Vellacott told LifeSiteNews that he had arranged to have Wagner given a medal for “using civil disobedience to further a just cause.”

“Civil disobedience” that involves invading a private premises and tussling with the people therein? Hey, why not steal the flat-screen TV and the good drugs while you’re in there? Thoreau would puke.

There was Dean Del Mastro trying to muzzle the internet.

Because he's such a classy guy eh?

While his fellow Con klowns did their best to turn our parliament into a farce.

And if all of that wasn't bad enough, I also learned that the Cons have damaged the census so badly, we'll soon have no idea what kind of country we're living in.

Prime Minister Stephen Harper’s cancellation of the long-form census has started to take a toll on Statistics Canada’s data. The agency released its final tranche of the 2011 census last week, focusing on languages, but it included a big warning that cautions data users about comparing key facts against censuses of the past.

Because ignorance is strength, facts are dangerous, and the truth is what Harper says it is.

And what WAS Great Ugly Leader doing while all of this was happening, and the police and the courts were going after his good buddies? Answer: squawking like an absurd chicken hawk about the War of 1812, while bombarding us with ads, like cannon balls, for his phony Economic Action Plan.

Until this ridiculous image... 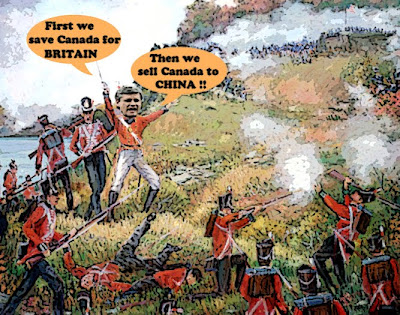 Could not be separated from this one... 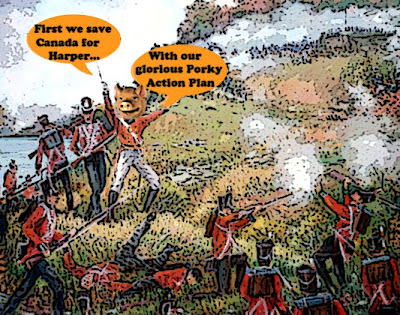 For goodness knows the Porky Action Plan and War of 1812 ads are EVERYWHERE. Even at the place where the Cons are muzzling scientists.

Oh boy. Can you believe that eh? What kind of country are we living in? For this isn't just criminal incompetence and sinister ideology, this is pure MADNESS.

And if they could do all that in one WEEK, can you imagine what they could do in the next two YEARS if we don't unite to stop them? 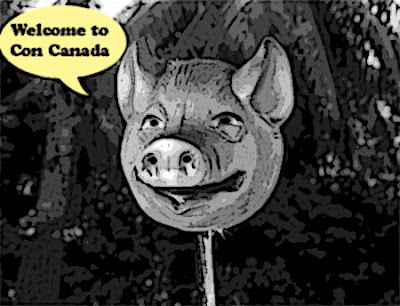 The methods Harper was going to use, to lie and cheat his way out of, the Etobicoke Center dispute, was posted a long time ago. Harper had to stall, until he could appoint his new Conservative judges. Harper was scared out of his mind. He didn't want to lose his majority, he cheated so hard to get. Same with the Federal election. Harper knew well over half of Canadians, did not want him as P.M. Our Federal election was democratic and fair??? Convince me.

Once you get, Fascism, Communism, dictatorship in your country, ruled by a tyrant....you have lost your country.

CSIS even warned of Communist China's huge inroads into Canada. BC was specifically mentioned. Gordon Campbell who works for Harper, sold BC's resources to Red China too. No-one listened to CSIS.

Christy Clarks massive job creation in BC, is for the Chinese, not for the BC people. Campbell gave Red China our timber industry. He also gave China BC mines. They are bringing their own people to work our mines.

Provinces should stay in Harper's Canada??? Convince me on that one too.

The time frame for disregarding mainstream is getting shorter.. <-->
Good work Simon

hi Steve...thanks, I'm glad you liked it. It's not easy listing all the crimes the Cons committed in just one week, but somebody has got to do it. ;)
For when you list all they have done to this country, they really do condemn themselves...

hi meadowlark...I realize it's desperate situation, but think of the positive side. The Cons came to power largely because they were able to convince Canadians that they were less corrupt than the Liberals. But after what they've done, they'll never be able to use that one again. For people will just laugh in their faces...

hi Owen...thank you, I'm glad you liked it. I figured I'd rather write about all those Porky Action and 1812 ads, rather than just scream at my TV... ;)

hi Beijing...thank you. It wasn't easy getting back to blogging, after taking so much time off. For a while I wondered whether I ever would. But then as I was lying on the couch moping, one of those Porky Action Plan ads came on the TV, and I jumped to my feet, shouted "OK that's it, that's the limit," and
turned on my computer... ;)

hi anonymous...I hope you're right. I hope that more and more Canadians are realizing that this government isn't just a sinister cult, it exists in some parallel universe. For one thing never changes, we are more than them, and the day we join forces will be the day we defeat them...