Mulroney, the CIA, and the Con Meat Factory 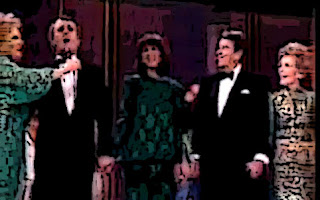 Oh no. Blow me down like a leprechaun. It turns out Brian Mulroney didn't have to sing and dance for Ronald and Nancy Reagan at the Shamrock Summit.

The Americans liked him enough already.

The CIA cautiously assessed the "Boy from Baie Comeau" as a more amiable ally than the occasionally irascible Trudeau in a September 1984 memo written three weeks after Mulroney's Progressive Conservatives swept to power, ousting the long-entrenched Liberals.

Although it's not surprising the CIA likes Con governments. They've worked closely with right-wing regimes all over the world for ages. And they've got their priorities eh?

"In our opinion, Canadians generally think little about defence and when they do, reject outright the idea of giving defence priority over maintaining the social welfare system," says the brief. "These attitudes made it easy for Trudeau to ignore defence, and will make it very difficult for Mulroney to implement a more expensive and efficient defence program."

Which makes me think that the CIA must LOVE the Harper regime because they're slashing social programs and spending BILLIONS on defence programs. Even if they aren't efficient.

And they're handing out that juicy contract, untendered, to the CIA's absolutely favourite company.

Have you noticed that Lockheed Martin, the giant weapons corporation, is shadowing you? No? Then you haven't been paying much attention. Let me put it this way: If you have a life, Lockheed Martin is likely a part of it.

The company that does our census, and knows EVERYTHING about us. What kind of filthy stuff do they have on the Con cabinet that makes the Harperites so determined to buy that junky jet plane? Even if it ruins us.

Which reminds me....why is Vic Toews making such a big fuss over the return of Omar Khadr? Trying to make it sound like he's dangerous.

On Saturday, Public Safety Minister Vic Toews described Khadr as "a known supporter of the al-Qaeda terrorist network and a convicted terrorist."

But his lips are sealed like a fish about the return of this scary mobster.

Look I realize Vickie is obsessed with sticking a meaty finger into one of Omar Khadr's many shrapnel wounds, or his blind eye. But shouldn't he be protecting us from the REAL criminals?

Because let's face it eh? If I was in a restaurant and I had to choose between sitting next to Omar or Vito, I'd definitely choose Omar. If you know what I mean. Who wants to die with an errant bullet in their back, and their face in the mashed potatoes?

Which reminds me of something else...why are the Cons trying to poison us? By cutting back on food inspectors even though this deadly bug is such a clear and present menace.

Gawd. Welcome to the Con Meat Factory. It came from Alberta and now it's EVERYWHERE.

But at least he was a better singer than Great Ridiculous Leader... 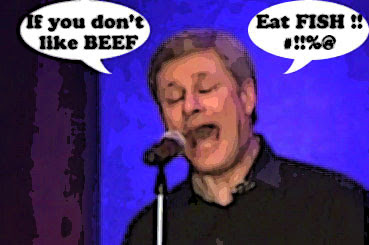 And at least he didn't try to KILL us.

You know this evening I was in my local supermarket, and I noticed a small sign above the meat counter that said something like return the green meat for a refund, and if you've already eaten it, see your doctor immediately.

And I pointed that out to an elderly neighbour, and I told her Harper is playing Russian roulete with our safety. Because he needs to cut food inspectors, social programs, pensions, and medicare to pay for his fancy warplanes. So he can bomb Iran...or China.

And judging by the look on her face, if she voted Con last time, as I suspect, she won't be doing that again.

So I'm feeling pretty pleased with myself tonight. And I think I'll go back to the meat counter tomorrow eh?

Taking down the crazed Harper regime, one voter at a time.

Until the Day of Judgement.... 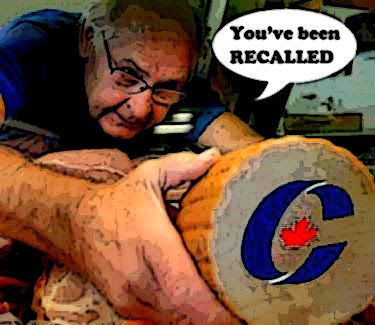 You crazy mixed-up fellow. Judgement Day was May 2nd 2011, you didnt make the cut. Sorry, you have been judged......the trial is over......the left just had to be punished. And it will be, believe me, it will be.

If you're so righteous Anon 5:46 AM, why weren't you and your fellow Con bigots raptured?

What the hell are you talking about? I don't buy that shit. There are earthly rewards and punishments, that is what I am talking about. The left will get theirs here, as for the hereafter....your guess is a good as mine.

What do you mean Harper will bomb China? Red China is the country Harper is selling Canada out to, instead of the U.S. China has kindly permitted MacKay and Harper, to install a military base in China.

As a resident of BC, I refuse to buy Alberta beef anyway. I don't like Alberta for selling us out to Red China either, as Harper is doing. To me, both Harper and Premier Redford are traitors to Canada. I refuse to support, neither one of them.

hi anonymous....no you've got your dates mixed up. May 2, 2011 was The Day That Will Live in Infamy.
The Day of Judgement is still to come. The right will be Raptured, or ruptured, for I will be merciless... ;)

hi anonymous...you're right about selling us out now, but in the long run Harper is positioning us to join the U.S. in trying to contain China. For the only possible reason you might want to buy any of those junky somewhat stealthy jets is if you wanted to try to penetrate the sophisticated air defences of a country like China. And yes, he is crazy enough to sell us out now, and lead us to war later...

No, that was the day of liberation. When another head of great leftwing hydra was severed. Tell me what are YOU going to do? Go on! I am all ears!

And yet you still pay your taxes, what a rube.