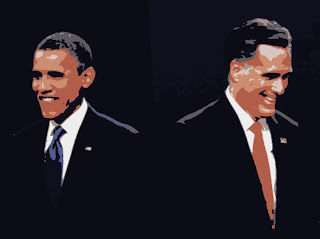 I couldn't believe what I was seeing. Obama and Mitt Romney had a debate but only Romney showed up.

Mitt Romney pressed the reset button last night on his campaign. He presented himself as a compassionate centrist, deeply concerned about the fate of the unemployed and low-income households struggling to climb the economic ladder in a stagnant economy.

Posing as a man who cares about the poor, when that callous millionaire has spent his whole life screwing them. Spewing one Big Lie after the other. While Obama just stood looking there looking like a wimp, and let him get away with murder.

Well, I’m with all the other talking heads: Mitt Romney won this debate. Barack Obama lost it. I mean, he got his butt kicked. It was, in fact, one of the most inept performances I’ve ever seen by a sitting President.

Did the President send out his body double tonight? Because if that was the actual Barack Obama out there, I’m not sure he can communicate well enough to be an effective President in a time of trouble, to say nothing of winning a second term.

Or a scene from the movie "Bridesmaids"... 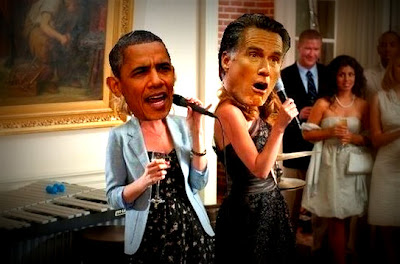 And the only question now is whether it will cost him the election.

How is Obama's closing statement so fucking sad, confused and lame? He choked. He lost. He may even have lost the election tonight.

Obama looked tired, even bored; he kept looking down; he had no crisp statements of passion or argument; he wasn't there. He was entirely defensive, which may have been the strategy. But it was the wrong strategy. At the wrong moment.

Which of course would be an absolute disaster. For Romney and his tea bagger crazies will join forces with the Harper Cons, turn North America into a right-wing jungle and a police state, savage the rights of women and gays, lead us to environmental catastrophe, and even the Third World War.

Fortunately, I don't think Obama lost the election tonight. Most American have already made up their minds about who they support. Obama still has time to recover with the others. But only if he has learned this lesson.

President Obama’s stylistic strategy during Wednesday night’s debate seemed to be to try to stay right above the rancor, to appear dignified, presidential. The problem with that approach is that the line between dignified and presidential and anodyne and weak is the width of a cat’s hair.

A lesson that all progressives, including the ones in this country, need to learn: when confronting the right-wing enemy weakness is not an option. For while we would use the truth to defeat them, they will use the Big Lie to try to destroy us.

Decency is wasted upon them, for they are rabid ideologues not humans. So we must go for their throats, as they go for ours.

We must keep the message simple and brutal or it will not register in this dumbed down world. We must show them no mercy. We must hit them where it HURTS.

We must hope that Obama really did learn his lesson.

For time is running out...

US American politics is a fraud. Obama might be deliberately making this obvious or he might be too inept an actor to have pulled off the game plan.

The game plan was to make the race close again. To get the base scared and mobilized after they became complacent with Romney's overdoing it on the "right-wing asshole" part.

This is like Jake Lamotta throwing that fight for the mob.

I just caught the last few minutes and the closing statements and thought why the heck isn't Obama looking at the camera? At a time when he should have hung that 47% crap around Romney's neck and made sure it stuck, he didn't even bring it up! Pathetic and probably just enough to hand Romney the election, nice knowin' ya Barrack.

I hear what you're saying, Simon, but remember there are still two more Presidential debates to go. And I expect Obama to ramp up the aggression and veracity as they go. Last night was a dress rehearsal. Romney will leave it there, he couldn't even begin to explain how his reckless policies would add up (they don't). The media should be talking about that. All Romney proposes is EXACTLY what Bush did, policies which crashed the US economy to a grinding standstill and reverberated around the world, tanking economies. The media should ask Romney why he wants to revisit THAT. Because that's exactly where his policies will go. Obama will up his game in future debates, when he needs to. No matter how good Obama did last night, the right wing media would still be saying he lost, anyway. Why shoot your load this early on the 47% or the Bain stuff? Save the knockout punches for when you need them, no? Tonight was just the first period. The gloves will be off next time.

Romney reminds me too much of Harper. Romney would do to the U.S. as Harper is doing to Canada. It was impossible for Romney, to keep his big fat mouth shut, exactly like Harper. At Obama's turn to speak. Romney interrupted Obama, he butted in non-stop. He ignored the moderator, when he was told to shut up. Harper uses his own childish attack ads because he knows, he can't win by his own merit. Harper cheats to win, as we all know.

People should read: Harper gives a speech in New York, at the Council of Foreign Relations. This was Sept 25/2007. This has been the evil agenda, for quite some time now.

Obama stepped into a terrible mess, left from Bush. Harper started out with a, $13 billion dollar surplus. Canada is now in the worst debt, in the recorded history of this Nation.

Romney and Harper would be one, horrible and lethal combination.

hi thwap...I see you are doing your best to find the pony under that mountain of manure. Thank you I need it ;)
A day later I just think that Obama was tired, he wasn't prepared, and when Romney began recanting his entire platform, or lying through his teeth, he became further disoriented and blew it.
However, what you say is true. It will energize the democratic base into not taking anything for granted. I know because he scared me enough into thinking I should travel to the U.S. and help get out the vote...

hi bcwaterboy...yes his body language was awful. He looked down all the time instead of at the camera, and appeared to have one mini stroke after the other. Some today were wondering if he is burned out, because lets face it he has had to deal with some enormous challenges. But he came out swinging today, so I'm still hopeful he will win in the end...

hi Dave...thank you for also trying to cheer me up. And I think you're right, when the media fact checks what Romney said, and Obama ramps us his attack in the next debate, I expect a better outcome.
Unfortunately I don't think Obama has the killer instinct the times demand, but just simplifying his message, and challenging Romney more than he did, will hopefully be all he needs to firm up his lead.
Of course, we also have to hope that Joe Biden doesn't have a bad night. Because right now I'm thinking may have to drink a lot before getting up the courage to watch that one... ;)

hi anonymous...what was so like Harper and his Cons was the way he twisted facts, and spewed out talking points and magic pyjama fantasies like a robot. The Republicans have used the Big Lie for years, and the Cons are their most devoted disciples. But as I said in my post, this should only encourage us to show them no mercy, by giving them more than a taste of their own filthy medicine...

Simon, they are showing no mercy to people like you. You are losing, don't you get it?

Obama may have "lost" the debate, but I don't think he has "lost" the war. What I saw was Mittie doing a lot of talking & actually giving the dems. a lot of ammo to work with. Sometimes it is best to let the other side talk, talk, talk.