Occupy Oakland and the Power of Peaceful Protest 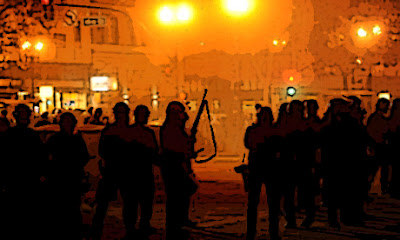 The backlash against the Occupy Movement has begun.

With this assault on Occupied Oakland...

And tonight the wounded protester in that video, Veterans for Peace activist Scott Olsen, is in critical condition in hospital.

And here in Canada, the writing is on the wall.

So it's important to remember this: if the police are ordered to clear a campground, the protesters must remain peaceful. So any violence inflicted on the occupiers, will reflect badly on those responsible.

And for every person arrested TWO will take their place.

For we will appear more human than them. 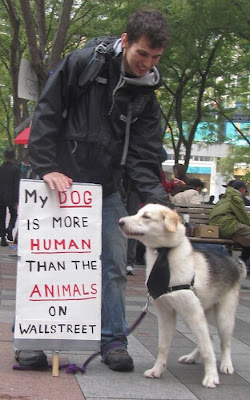 The occupiers should also remember that if they get kicked out of one space, they can always occupy another, and keep taking their message to the streets.

The message that more and more people are getting.

The people involved share one belief: that the currently dominant “neo-liberal” or “free market” version of capitalism is not working for the vast majority of people. While it creates wealth for some, it is also the destructive global engine behind massive and growing inequality, the current fiscal and economic crisis, and climate change and environmental collapse.

Even if some of the talking heads like Andrew Coyne still don't:

Asked whether the rallies currently sweeping the globe could bring about real change in Canada, Coyne could barely contain himself:

“Even in the U.S. where people have far more problems to actually worry about, it’s not clear that these people represent anybody other than themselves,” he frothed. “There’s always a constituency that doesn’t like capitalism (or) rich people … They just decided to get together and shout about it some more.”

Can you believe it eh? Andrew Coyne, the son of a former Bank of Governor, yapping away on the Con Broadcasting Corporation. With a silver spoon in his mouth.

Yup. Rest easy my gentle occupiers. All we have to fear is fear itself.

All we want is a better world.

Today the forces of darkness threaten us.

But tomorrow will be brighter...

A veteran getting seriously injured by police could be the catalyst that takes this movement to a whole new level. Shame the MSM won't give this fair reporting, certainly not here in Canada where blaming the victim is common place when it comes to police brutality cases in the news.

Great blog by the way, checking it regularly since stumbling across it a week or so ago.

Some moron tried to say that our economic problems are caused by the demographics of an aging population.

If that's the case, how come the richest 1% have gotten so much wealthier? What does an aging population have to do with the wealthiest making out like bandits?

We're being literally conned, and Coyne is just blowing smoke for his team.

hi Rev Effect...thanks for your nice comment. And yes any violence perpetrated against a peaceful movement will take it to a higher level. The media will be forced to cover it, and our message will get louder. A lot of Canadians might not be prepared to hit the streets, or camp out. And I have to admit that since I live about five blocks away I'm sleeping in my nice warm bed. But I think that message resonates with a lot of people, so they won't stand to see the Occupiers brutalized. But then I'm an optimist eh? ;)

hi thwap...yes, I must admit that since he dismissed the Occupy movement by saying that more people lined up for an i-phone, the silver spooned one is getting on my nerves.
If I ever get to remake The Scarlet Pimpernel I will definitely cast him as an effete aristocrat, mumbling sneering platitudes, while being led to the guillotine... ;)