The Occupy Movement and the Hippie Bus 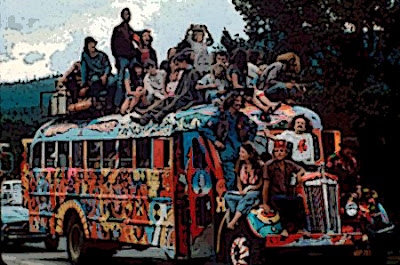 I'm not surprised at the way the Occupy movement in Canada has been attacked by our corporate media. Or the way it has been mocked by the Con klowns at Fox News North.

But I must admit I was a bit surprised by this one.

I just couldn't understand how ANYONE could be impressed by Coren's oily and absurd rant.

I have to admit to experiencing a considerable amount of cognitive dissonance being largely in agreement with his withering assessment of the protesters involved in the Canadian version of this movement.

And JJ, the Unrepentant Old Hippie...

What little sympathy i may have been able to muster for the Canadian protests vanished abruptly last week when I read some of the “occupiers” on Twitter, discussing how they define “the rich” — and it turned out that their definition would include ME.

Could possibly have in common with that smarmy, limey, religious fanatic.

And then I remembered. Maybe that guy was right. Some boomers just don't get it.

I am, in other words, part of what could be called the Clueless Generation. The Clueless Generation is made up of middle-aged, professionally successful people, who grew up in a nation that featured a mostly thriving economy, low-cost higher education, and some minimal commitment to economic justice. As a consequence, we graduated from school with little or no debt, got good jobs that featured real possibilities for advancement, and have on the whole ended up doing very well for ourselves.

Can't understand that THEY were the entitled or the lucky ones, while young people in the U.S. and Canada face a future of high unemployment, poor jobs, and no benefits or pensions.

On a crowded, burning planet that most boomers won't live to see. Can't understand that Occupy Canada, as humble as it may be, is part of a global movement from Toronto to Tahrir Square.

You know it's funny eh? Every time I wander through the Occupied Toronto campground I can't help feeling that this is what being at Woodstock must have felt like. The peace signs, the music tent, the earnest, innocent idealism.

And on the Occupy Toronto website recently, somebody actually posted this song...

Which of course blew my mind eh?

Because I LOVE boomer music. And those pictures look soooooo familiar.

But sadly, the train hippie bus is leaving the station, bound for the future, and a lot of boomers won't be on it.

The good news? The best and most progressive ones WILL be riding with us. Which is a good thing because innocent idealism needs to be tempered with experience. So we can forge a movement that will really change the world.

And because, quite frankly...

Hey boomers. There will always be room on my bus for you.

OK. Who forgot the bong?

Have a great weekend everybody...
Posted by Simon at 12:24 AM

But I must admit I was a bit surprised by this one.

The Occupy movement separates the wheat from the chaff, in more ways than one. The movement, especially in Canada, has yet to develop a charter yet that has not stopped journalists, pundits and bloggers from claiming the initial salvos from the movement to be gospel. The fact is we have no idea what will become of the movement. It is in its infancy. There are too many facets to its evolution that no one assumption can yet be made. Although it is always considered fun to punch a hippie, even when you call yourself one.

Great post. I was having coffee with a friend of mine the other day, and we concluded that even if the Occupy Movement results in no real change, at least two things will likely emerge from it:

a) A raising of consciousness about the disparities that exist in our society;

b) The realization amongst people that they are not alone and isolated in their disaffection with the status quo and their desire for a more just society.

I do not get especially upset at those who disparage the movement. We can't expect everyone to be on the same page, even progressives; if even some attitudes are changed amongst us boomers, or even inspires a willingness to break out of our ideological confines and really listen to an opposing viewpoint, much will have been accomplished.

When you listen to Coren, I never do unless linked,you actually think he is describing himself when using adjectives such as self indulgent. He's describing people who would seem to have an ego the size of his. I don't know why anyone would spoil their day by even wondering what he's thinking let alone tuning in. thanks for that Simon. Just kidding. I too follow the 'Old Hippy" because I am one and I must say was a little perturbed by the comment. Mark

"What little sympathy i may have been able to muster for the Canadian protests vanished abruptly last week when I read some of the “occupiers” on Twitter, discussing how they define “the rich” — and it turned out that their definition would include ME"

ME ME ME + GUNS GUNS GUNS= UNREPENTANT OLD TEABAGGER

hi sassy...I understand that Progressive Bloggers is a diverse family. And that not everybody is as proudly left as me, and I'm fine with that. Vive la difference as we say in Quebec. But getting giddy over the smarmy words of the Christianist gollum Coren strikes me as revolting.
And suggesting that the Canadian occupiers are just a bunch of spoiled greedy kids, is ugly, cheap, and condescendingly dismissive.
When in fact every time I visit the Occupy Toronto campground I am struck by the number of poor people, young and old.
And their message is greed is bad. And that's GOOD. Whatever some jaded boomers might think.
It's fair to critize strategies, or messages, but one shouldn't question the occupiers motives.
Because I have seen them up close, and they are pure and noble.
So earnest and innocent I fear for their future.
If progressives can't encourage these gentle dreamers, they should STFU...

hi Jymn...whatever else the Occupy movement is, it is a progressive uprising that has spread around the world. And since Canada is not an island, and is in the grips of a right-wing regime, its message is as legitimate here as it is anywhere else.
If that message can't be told in a 30-second TV clip too fucking bad.
And the people in that movement don't deserve to be treated like spoiled greedy kids. When they're not like that at all.
But yes you're right, it will separate the wheat from the chaff.
Who are the real progressives, who is more invested in the future, and who doesn't want a better world...

hi anonymous...thanks I'm glad you enjoyed the post. Whew. I was afraid some boomers might come after me. You know how they hate younger people. ;)
But seriously I agree with you...

a) A raising of consciousness about the disparities that exist in our society;

b) The realization amongst people that they are not alone and isolated in their disaffection with the status quo and their desire for a more just society.

It's the idea that counts. And the coming together of all kinds of people to make a better world.

The more progressives get involved in that discussion, the better that world will be...

hi zoombats... if Coren's smarmy manner had not made me want to vomit, I probably would have given the gollum an 'A' for satire.
I mean when when the slimy limey leaned across his desk and said something like "They're greedy, their envious, they want to be famous, they want to be on radio, they want to be on TELEVISION " what else are we to think.
Except that he was describing HIMSELF.
And yes I usually try to avoid Coren because he makes my face turn red, causes the veins on the side of my head to beat like bass drums, and makes me want to throw something at the television.
So I'll probably forgive the Old Hippie by tomorrow. Oh wait I already have. But for inflicting those ghastly three minutes and
seven long seconds of Coren on me, I may not be able to forgive Red Tory for at least another three days... ;)

hi anonymous...no JJ isn't a teabagger. Yet. She's a progressive libertarian, and like most of them is socially liberal, and conservative on economic ones.
And of course, as you say GUNS, GUNS, GUNS.
But we agreed to disagree about that one a long long time ago. And we're sticking to our...um...guns.
All I would ask from her is to try to visit the Occupy camp in Vancouver, and see for herself what's really going on. And who the occupiers really are.
I'm sure she would be both inspired and annoyed as I sometimes am. But at least she would not judge them so cheaply...