Jamie Hubley, the Cons, and the Cycle of Hate 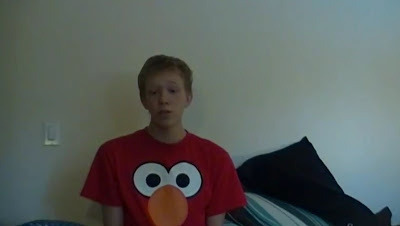 It's been about a week since Jamie Hubley killed himself. And although for a while I was so sad I could hardly write about this tragedy, now I'm feeling better.

Because now I've seen how many young Canadians have been moved to action. 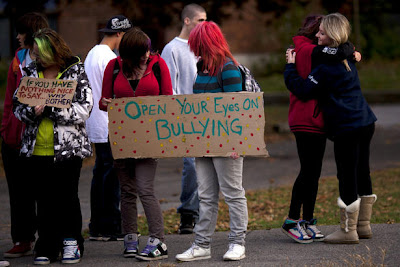 I have been encouraged by the amount of attention his death has received in the MSM, after so many years of shameful silence. And this was a pleasant surprise.

But here's the thing eh?

When it comes to the Harper Cons words are not enough.

Dan Savage, the Seattle columnist who started the “It Gets Better” movement, wrote that Canada’s Conservatives who have made it worse for gays and lesbians in the past can have evolving views.

“But it’s going to take more than a video to undo the damage done by Vic Toews and Canada’s conservatives,’’ Savage wrote. “This was, quite literally, the least Vic and his conservatives could do. The very least.’’

Because in five years in power they have done NOTHING to fight bullying and homophobia. Nothing to break the cycle of hate.

Now is the time for the Harper government to redeem itself by supporting a national strategy to fight bullying and homophobia in our schools. If they did that I still wouldn't vote for them, but I would be the first to applaud them.

Because I believe in the power of redemption, and protecting children, gay or straight, should not be a partisan issue, just the right, decent, and HUMAN thing to do.

So I never have to watch a Canadian kid cry out for help.

And have his or her words fall on deaf ears.

But nobody caught him in time.

Let his death move us ALL to action.

Hi Simon,
I'm really skeptical of the Cons motives for doing the video: it reeks insincerity. The likes of Vic Toews have done untold damage to LGBT Canadians through his "freedom of speech" on gay marriage, you know, the warnings of the downfall of society if you allow "them" to marry. He is, and always will be, a disgusting homophobe and world class bully. I'm not cutting them any slack. The only thing that would change my mind is if they took on the real bullies: the hatemongers in clerical dress, the McVety's of the world and finally call them what they truly are. Until then, I'm not convinced that anything they're doing is motivated by wanting to make a difference. Would they have done this if sweet Jamie's Dad wasn't a politician? I doubt it.

Don't forget Tom Lukiwski, who stood up, shed his crocodile tears, and promised to spend the rest of his life making up for his hateful comments. All he's done since then is keep his mouth shut.

I checked out that Toronto Star piece. I guess harper let some of the less retrograde Cons say some nice words in the aftermath of this tragedy, but it won't make amends for the way they've denigrated gays consistently, over the course of years and years. And harper certainly won't consider putting real resources behind pro-gay initiatives.

The comments from the harpercon, homophobic trolls were nauseating. "No good deed goes unpunished in the Red Star" say the shit-heads. Fucking whiners. Typical of their ilk; incapable of taking responsibility for their actions.

Why does a national strategy have to be about bullying AND homophobia. I worked with lots of kids in m teaching career that committed suicide and it had nothing to do with homophobia. Sometimes bullying was a factor yes but I don't think homosexual kids are any more likely to commit suicide than straight kids. Are there any statistics on this to back this up? It pains me that this young kid's death will be seized upon by some hoping to promote an agenda. What we need in this county is a national strategy on RESPECT and CARING for others.

I can agree all types of bullying deserve attention, no question about that and that bullying behaviour has no place in society, (I deal with complaints about grown up bullies in the workplace). However, there is substance to tackling homophobia attached to a bullying strategy and the stats to back it up. Google it to find out (if you're interested). This is an interesting youth advocacy group in BC:http://www.mcs.bc.ca/about_mccreary

My personal experience in grade 7 (back in '78) for example, was to have the teacher participate in the full class taunting exercises, and at age 12, kids know full well what a homosexual is and what words to use to diminish self esteem. I was more fortunate than Jamie to have survived, but my experience in the 1970's was no better and I think very little has changed in the school environment. That was in the good old days when you just toughed things out, but the memories linger to this day and I have zero tolerance for bullies as a result.

hi BC Waterboy...you aren't the only one of my friends who feel that I was a bit soft on the Cons. And you're all probably right. When I saw that old bigot Vic Toews I practically shit myself. And I did notice that they did not mention the word gay. But then everybody knows how much I despise the Cons, and on the issue of bullying I am prepared to cut them some slack. Because it's such a horrible problem every little bit helps. However that also means that if they don't do anything to fight bullying, I will attack them harder than ever...

hi anonymous...don't worry I won't forget that hideous homophobe Lukiwiski. In fact he's the star of one of my YouTube videos on the homophobia of the Cons. That way I can't forget him, and neither will others... ;)

hi Thwap...no it doesn't make up for the homophobia of the Harper gang. And like you I would be very surprised if the Cons put their money where their mouths are. But as I said in my post, if they did do something, I would publicly thank them. Because a lot of kids are suffering right now, and I'd do or say ANYTHING to help them...

hi way way up...yes...maybe I should just have asked the government for a National Anti-Bullying Strategy. Because I want to protect ALL bullied kids, gay or straight, just like I tried to do when I was at school.
And also because any strategy to fight bullying must in a country where studies show almost 70 per cent of gay kids don't feel safe in their schools, that they are disproportionately targeted, and that they commit suicide at a rate several times that of other kids, would have to address the problem of homophobia.
And please don't go on about some "gay agenda" because the only agenda here is to save the lives of Canadian kids. You know? RESPECT and CARING. I'm for that too...