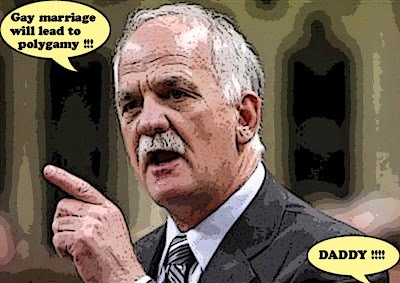 Of all the nasty homophobes in Stephen Harper's sinister SoCon government, Vic Toews has to be one of the worst.

He opposed protecting gay people from hate crimes. He compared gay marriage to a Black Mass. And over and over again he foamed into his fascist sheriff's mustache ....claiming it would lead to polygamy.

Well wouldn't you know it ? It turns out this champion of so-called family values has a little poly problem of his own.

The 55-year-old Toews' public face of self-righteous morality is now clashing with his troubled private life. An MP dubbed the "minister of family values" by Liberals is embroiled in a messy divorce after fathering a child last fall with a much younger woman.

Can you believe that? The Minister of Family Values impaled on his own quivering petard. Viva Viagra !!!

Of course, I always knew that this wretched bigot was a hypocrite.

He posed as a crime fighter. But was CON-VIC-TED of exceeding his personal campaign expense limits in the 1999 Manitoba provincial election.

But this sordid affair really is the last straw. I mean aren't these religious fanatics supposed to at least get MARRIED..... before they breed with much younger women?

Lordy. Jebesus save us. First we had Maxime and his biker chick. Now we've got Vicky, his mistress, and his love child. It's like the Fall of Rome on the Rideau. Or Gomorrah in Manitoba.

Look I know I'm a prude. But I really think it's time to put some real family values back on the national agenda. Before these shameless Cons turn our Parliament into a Swinger's Club.

As for the vile homophobe and hypocrite Vic Toews .... I found out he was born in Paraguay.

So when these right-wing fanatics go down in flames. As they will.

The sherriff can jump on his burro.

WHEW!! THANKS, Simon!! I have been waiting and WAITING for some media, bloggers, etc. etc. to publicize this sleazy hypocrites double standards. Apparently there was a "gentleman's agreement" at the time, that his privacy would be respected, as it was "a personal matter". Why should HIS privacy be respected, when he and his friends will SKEWER anybody who looks at them sideways!
Goov for you!! BRAVO! I'm sharing madly, because we have got to ACT with these evilConsters. NOW.
(ps Sorry about all the Caps 'n stuff, but I'm very passionate about this! ;-)

hi CanNurse...thank you for reminding me about this post. After reading it again I liked the DADDY!!! part so much I decided to run it again. :)
You know when I see Vic Toews back in Harper's inner circle I can't believe my eyes. If you check Wikipedia the man has the WORST and most reactionary record on matters of justice that I have ever seen. But that's why we are fighting eh?
Will this be Canada or Paraguay?

Wow. This is news to me. Good for you for giving it some "exposure"...pardon the pun.

Just who does this AH think he is anyhow???????ANYONE WHO OWNS A CALL PHONE OR COMPUTER SHOULD DONATE MONIES TO ESTABLISH A FUND TO FINANCE HIS IMMEDIATE AND PERMANENT DEPARTURE FROM THE CANADIAN POLITICAL SYSTEM AND LANDSCAPE.

Get rid of the jackass. Bravo SImon for posting this. This runs right in with what Anonymous has out there. Bravo. Keep finding and posting the good stuff.